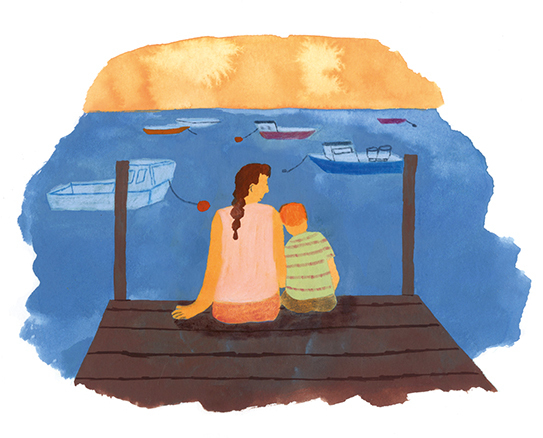 Because it was later than the ferry’s last call, the dock was almost empty. The sun-scorched boys and salt-haired girls no longer cast for fish. The salt-scorched girls and sun-haired boys no longer cast themselves like fishing line, dashing wide over the dock’s edge into clean air and sea. All were at home: warm and ripe for sleep. Dogs and tackle and trucks were put to leash and shed and lot. The clink and squee of china rubbed and piled after dinner in the wharfside cottages was all that remained, save the mild slap of waves on the pilings, a gesture stroking wakefulness into slumber.

I had to have been about 13 — too old to be accompanied on a solitary walk to a well-trammeled spot, too young to know why this had felt like an omission.

Growing up summering on this small island, I knew its paths. My bare feet had run every inch of the silty dirt roads, each pine-needled shortcut through the woods, and had, still stinging from the mussel-encrusted beach, roiled each tide pool. But with the ebb and flow of adolescence rushing through me, I was adrift in a strange sea, as if attempting to reach a breakwater toward which I could only bob and grasp.

And so to the dock I came, where the one or two skiffs and whalers that happened upon this quiet place would moor for a short span — where I could feel the solidity of the boards beneath my long-grown legs even as the waves surged below.

An older couple chatted softly to my left, their consonants clacking like gently rattled clamshells. Clomping a ragged game of tag, a couple of kids dodged past the lobster traps and disappeared. The sea beneath my shins tatted the reflected light of a reclining sky into pale rings, twined together in a loose hold. I sat haunch to deck, feet dangling, and the water stretched out before me as it had summers prior — and would in summers to come — wide and deep and mute.

Gradually I came to realize that a tiny cheek — freckled, soft — pressed against my arm. A redhead, a boy of 5 at most, had sidled over to me, and his weight rested solidly on my shoulder.

Maybe he had mistaken me for his mother; maybe he was muddling toward the comfortable in the face of so much sea and sky. But there we sat for a small five minutes that felt as full and voluble as they were silent.

Then he was gone, slipping off into the twilight as a rope slides over a piling, sloughing its mooring.

In my favorite of her Crosswicks Journals, A Circle of Quiet, (a book that chose me during a different needful wander later in life), Madeleine L’Engle ponders the term ousia: simple being. It is, she suggests, a sense of resting completely at peace but not inactively so: an unstatic stasis.

To be depended upon simply and softly, cheek to arm; it was a sensation I had never experienced — didn’t rationally understand — but felt deeply nonetheless.

Looking out at that same sea today, I wonder about our moorings — what holds us to the earth in the face of the enormity of change, what steers us through the estuaries between youth and age — and I can’t help but think that what carried me through was being taken as a mooring at the same time that I felt myself lightly lifting away from my own.

Years later on that same island in that same sea, I saw a teenaged boy — redheaded, vital — skimming by on a bike, as sleekly as a skipped stone. How many acts of others have shored us up — our lives intertwined but invisibly so, like crossed fishing line?

This is, I think, the reason this recollection still buoys up after all these years. The pure solace of being is being necessary to another.

Michelle Holden, who holds degrees from Notre Dame in English and music, is a writer, performer and educator based in western New York. Contact her at info@13Bcreatives.com