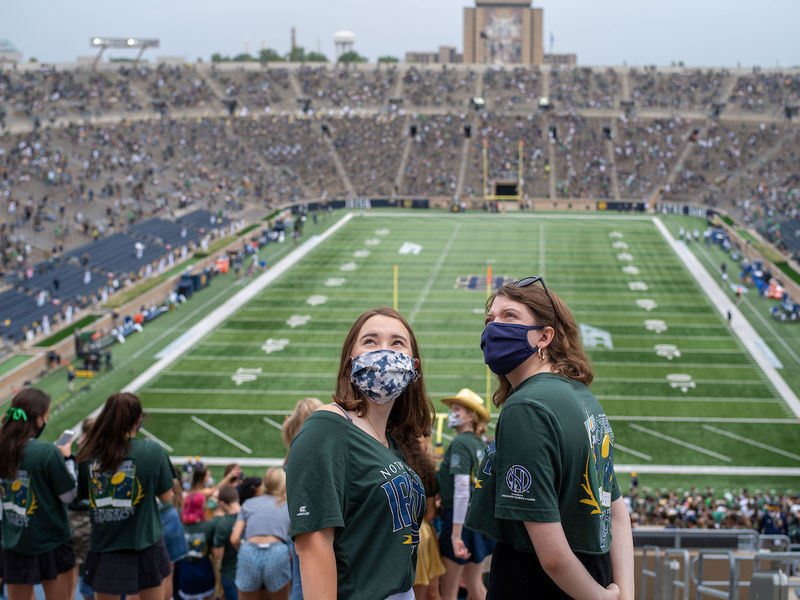 There was no pep rally or Trumpets Under the Dome, no tailgating or grills on the quads selling hamburgers and bratwursts to raise money for student groups. There was no band concert on the steps of Bond Hall and no player walk through ranks of cheering fans to Notre Dame Stadium.

For a most unusual home opener on September 12, there were few campus football weekend traditions — except for a 27-13 victory over Duke. Adding to the unusual nature of the game, it was a conference game, Notre Dame’s first as a temporary member of the Atlantic Coast Conference to accommodate COVID-19 scheduling complications.

Inside the stadium, face masks and social distancing were required for the smallest stadium crowd in more than 80 years. An announced crowd of 10,097, made up mostly of students, faculty and staff, sat in assigned seats in small groups at least six feet apart.

On the stadium video board, a “physical distance camera” displayed images of audience members who were inching too close together as a reminder to adhere to game day COVID-19 protocols. Concession stands sold only water and soft drinks.

“It was a surreal experience,” said junior Grace Scheidler, who went to the game with her three roommates. Students sang the “Notre Dame Victory March” and other traditional songs and did the traditional arm motion during the “1812 Overture” at the start of the fourth quarter. “It felt like muscle memory, doing all the usual things, but spread out and with our face masks on.”

Being at the game was a refreshing and almost normal experience amid all the precautions of this academic year, Scheidler said. “I think students made it as much of a game day as they could, and felt like they earned it.”

Before kickoff, campus was mostly quiet. A half dozen undergraduates tossed a football on South Quad and some pedestrians strolled the sidewalks, all wearing face masks as required by campus COVID-19 rules. A lone bagpiper played near LaFortune Student Center.

A few signs told the story of the day. “NO TAILGATING” announced an electric sign on campus. Along Twyckenham Drive just off campus, “Closest parking $0” read a sign staked in a private lot containing only a few vehicles. “Go Irish, Beat COVID-19” said a sign on a bus parked at a bar near campus.

For some fans, attending the game will be something they will remember years from now.

Despite the small audience, “there was still great energy,” said Jake Bentley, a second-year law student who attended. “Everyone was super thankful we were having football. It was as close to normal as we can possibly get.” He said everyone he saw in the stands was wearing a face mask and adhering to the other safety protocols.

“It definitely felt like a game that will be remembered,” said Josie McQuillan, a junior who attended with her three roommates from Pasquerilla East Hall. Their assigned seats were in the end zone, right above the Notre Dame tunnel, where the marching band usually sits.

Because of the need for social distancing amid the pandemic, the University has limited attendance at this season’s home games to 20 percent of Notre Dame Stadium capacity, which means a maximum of about 15,525 fans per game.

Notre Dame, Saint Mary’s College and Holy Cross College students were able to buy season tickets. The remaining available tickets are being offered for sale to Notre Dame faculty and staff, and some are reserved for family members of each team’s players. Tickets cannot be resold. Season ticket holders were notified they could reserve their usual seats for 2021. Eligibility for this year’s football ticket lottery will carry over to the 2021 season.

The 10,097 people in attendance Saturday did not make up the smallest crowd in stadium history, but you have to go back to the 1930s, when several Notre Dame Stadium games drew fewer fans, including a 1932 victory over Drake University with just 6,663 spectators.

“There was just one other fan in the concourse as we were walking to our seats at 1:30 p.m.,” said Christopher Hillak, operations coordinator for Notre Dame’s executive MBA program, who was assigned a seat on the 45-yard line. “I felt very safe. I thought they took good precautions,” he said, noting that employees were visible during the game wiping down handrails with disinfectant.

Ushers reminded fans to stay in their assigned seats and thanked them for wearing their face masks.

It wasn’t the usual crowd in the Notre Dame Stadium press box, either. Because of COVID-19, the capacity of the main press box is limited to 28 reporters for each home game. No non-ND photographers or videographers are permitted in the stadium this season.

It was MBA student Nick Glazewski’s first ever in-person Notre Dame game. “It was pretty surreal,” he said of the small spread-out audience. He sat with three other MBA students. “Nobody else was even in our row.”

He noted the quiet atmosphere on campus before the game. “It was almost like a day of classes,” he said. He is grateful to those who made the season possible. “It was not an ideal game day, but it’s way better than not having football.”

Following a spike in COVID-19 cases in August shortly after the semester started, University President Rev. John I. Jenkins, CSC, ’76, ’78M.A., said he considered sending students home. Notre Dame instead shifted to all-online undergraduate classes for two weeks, then gradually resumed in-person classes as the number of new cases declined. The successful control of the virus since pausing in-person classes allowed the students to remain on campus and attend Saturday’s game.

Undergraduates were assigned seats according to their residence hall room assignments, with a maximum of four tickets per residence group. Students who live in singles were permitted to sit with up to three other single-occupancy residents of their dorm.

The Band of the Fighting Irish attended the game and played traditional songs, but they didn’t take the field or march. Band members were seated, six feet apart, in the northwest corner of the stadium. They wore casual student attire, not their uniforms. The Irish cheerleaders, too, performed in the stands. After the victory, members of the football team spread out across the field to join in a socially distant singing of “Notre Dame, Our Mother.”

The game against Duke marked the start of Brian Kelly’s 11th season as the Irish head football coach. During the game, Notre Dame announced that Kelly’s contract has been extended through the 2024 season.

Despite the unusual circumstances, the University has developed ways for alumni and other Irish fans to be involved virtually this season in addition to watching the games on TV.

An online show, Here Come the Irish, streams at 12:11 p.m. ET each Thursday before both home and away games. Vic Lombardi ’91 and Ryan Harris ’07 break down the upcoming game and offer predictions, along with sports writers from The Observer and other guests.

On Friday afternoons, there is a virtual version of the traditional Football Fridays at the Eck events, streamed live on the Notre Dame Alumni Association’s Facebook page.

For a fee, fans may join the Rally House, which offers online watch parties featuring Notre Dame celebrities and former players prior to and during each home football game. The experience permits fans to create their own watch parties, allowing friends to virtually watch the game together.