Finals were a wrap, the semester concluded, and the campus emptied out — all but the seniors, that is. For a short stretch in May, our son, Benedict, and his graduating class had the Notre Dame ecosystem to themselves. “Senior Week,” they call it, though that name only highlights its limitations. As thousands of seniors (most recently, our son) have found out, a mere week is sorely inadequate when it comes to saying last goodbyes and ruminating on four years of Irish living.

Ben has been an Alumni Hall Dawg for his entire ND career. Unlike some of his buddies, he decided to stay ensconced in his adopted home even into his senior year. Sentimentality? Convenience and economy? I imagine some combination of these. Regardless, we were pleased with his choice, because it made keeping in touch with him all the easier.

We’re townies, you see, and a mere 20-minute drive separates our southside home from Main Circle, the circle drive and campus meeting point that lies in front of Alumni. Over these past years, it wasn’t uncommon for Ben to call with a domestic request of one kind or another — the kind of thing that would’ve been tough for Domer parents in Texas, say, or Tallahassee. “Can you bring up my dark suit?” he’d ask, in anticipation of some banquet or dorm dance. “Of course,” I’d say if I was the lucky one to get the call. “See you in the circle in a bit.” 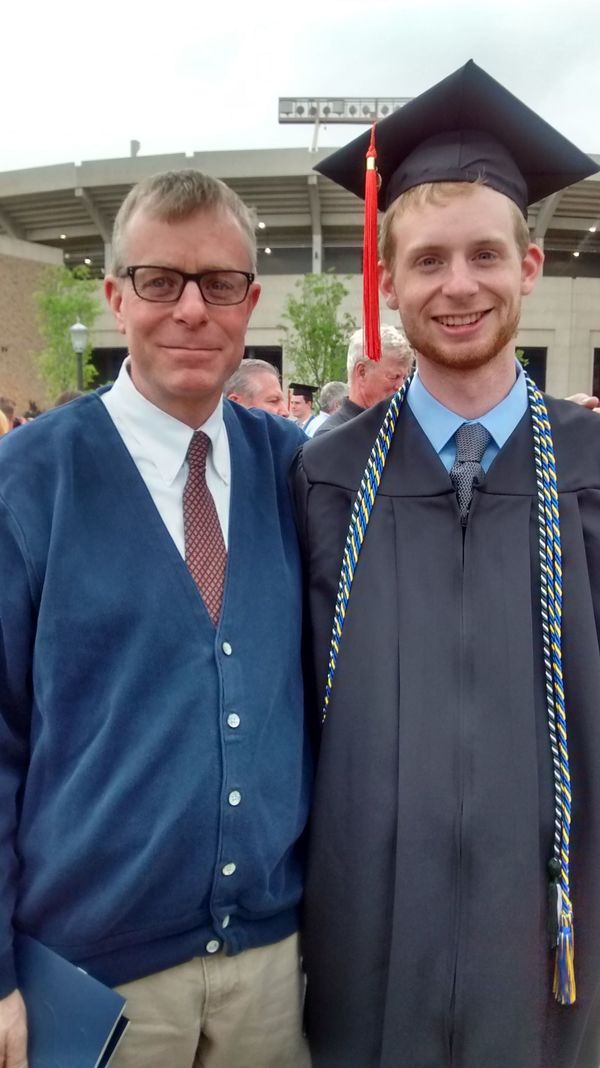 The author and his son at graduation. Photo by Nancy Becker

Zoom, I’d scurry up Miami Street, jog over to Eddy, and then jog again to Notre Dame Avenue. I make a beeline for the Golden Dome — always inspiring, always gloriously framed by trees and sky — and make my way around the statue of Our Lady to the Alumni curbside. More often than not, Ben wouldn’t be down yet and I’d have to give him a jingle on his cell. But the wait was welcome: a chance for this parental interloper to soak up a bit more Notre Dame atmosphere and mystique.

Then, as if out of the ether, Senior Week arrived — our firstborn was graduating from Notre Dame! As unreal as it must’ve been for him to lounge around campus that week, it was even more unreal for us. “Remember when he got his acceptance letter?” my wife and I asked each other (more than once). “Remember when we dropped him off in the circle that first day?”

We remember it all like it was yesterday. And now it was drawing to a temporal close, although we knew Ben’s relationship with Notre Dame would continue on indefinitely, his four years morphing into the 40-year association that so many Irish alumni acknowledge. An association that we’d only be able to glimpse from the outside.

But graduation and the days leading up to it afforded us some final precious connections with Ben and his ND experience.

“I picked up some dry cleaning from Ben this morning,” Nancy told me late in Senior Week, clearly pleased that she was able to make one more Alumni Hall run. “Can we get it done in time for Commencement Mass on Saturday?”

I called the cleaners and nailed down their turnaround time — no problem. “And I’ll get it up to him on Saturday,” I said — my chance to get in one last delivery.

Knowing that final-Friday festivities would have stretched late into the evening the previous night, I waited until mid-morning on Saturday to call. “I’ve got your suit and shirts and gown,” I told him. “When can I drop them by?”

The traffic on Notre Dame Avenue was tighter than usual, so it took me a while to get to the circle. When I got there and pulled up to the dorm, I paused before phoning Ben. It seemed like a watershed moment — the last time that I’d be performing such a pedestrian service for my son. The last time, in other words, that our father-son relationship would be so routine.

When he emerged from Alumni, all shorts and sandals, I handed over the plastic-wrapped bundle of mature attire.

We did see him later, following the stirring Commencement Mass in the JACC. After photo ops at the stadium flagpoles outside, we joined with Ben, his crew, and their families for a celebratory feast downtown. As the evening progressed and conversation ranged from anecdotes and reminiscing to future plans, both immediate and long-range, it dawned on me that here was Ben’s new circle. Here was his new home of Domer allies who’d all be launching out beyond South Bend after graduation but sustaining their camaraderie across time and space.

And here was my first, privileged visit to that circle. I hope there will be many more.

Rick Becker is a husband, father of seven, writer, and registered nurse. He teaches nursing at Bethel College in Mishawaka, Indiana, and blogs at God-Haunted Lunatic.