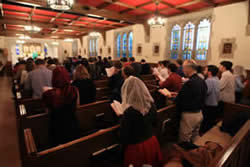 The Mass is celebrated publicly about 176 times each week at Notre Dame when the University is in session, says Father Richard Warner, CSC, the director of campus ministry. Different Masses meet different spiritual needs. Congregants may pray together in English, Spanish or Latin and choose from a sampler box of musical styles and aesthetic surroundings. All of these Masses are celebrated according to the reformed Roman Missal of Pope Paul VI introduced in 1970.

All except one, that is. At 8 a.m. on October 14, some 100 people gathered with Father Thomas Blantz, CSC, in the Saint Charles Borromeo chapel in Alumni Hall to participate in what was likely the first Tridentine Mass on campus in nearly 40 years.

“It’s very exciting,” says senior Mary Elizabeth Walter. “Had you told me three years ago we would be having the Tridentine Mass here on campus I would have said ‘Yeah, right, I wish.’”

For years, pockets of Catholics have secured permission from local Church authorities to celebrate the Mass using the 1962 Missal of Blessed John XXIII. The reforms issued under Paul VI had turned the priest toward the congregation, allowed translation of the entire Mass into the vernacular, changed other important customs and prompted reactions from the faithful that ran the spectrum from elation to acceptance to devastation.

Unlike most Catholics born after Vatican II, Walter grew up with the Tridentine Mass at her family’s parish in Baltimore, which she says also offers Sunday Masses in English and Lithuanian and brings all three communities together for vibrant parish functions.

Church leaders hope Walter’s experience of unity in liturgical diversity is the norm. At Notre Dame, the decision to initiate Sunday celebration of the old Mass came swiftly last summer after Pope Benedict issued Summorum Pontificum, an apostolic letter affirming it as the “extraordinary form” of the Roman rite established after the Second Vatican Council.

The move also reflects the persistence of students, who have expressed their interest to Warner and his staff in person over the past few years. Recently, more than 150 students showed their support on Facebook, the social networking website, by joining a group called “I am interested in having the Tridentine Mass at Notre Dame.”

Brett Perkins, who runs Notre Dame’s programs for Catholic peer ministry and outreach to Protestant students, says many of these students are as attracted to contemporary prayer services as they are to older devotions. “They’re not willing to be . . . labeled as a particular type of person,” he says. “What they are is fully Catholic.”

For students like Walter, love for the old Mass and its reverence for God’s transcendence runs deep. Some critics of the pope’s letter have dismissed their preference as “nostalgia,” a take that makes Walter cringe. The history and medieval studies major started exploring the Mass more critically in high school. “I wanted to check it out for myself and make sure it wasn’t this irrational attachment just because my parents loved it,” she says. “They’re both the Mass. They’re both beautiful. But there’s a particular richness to the Tridentine Mass. The prayers are so much deeper there. It heightens your awareness of the sacred.”

“It’s an acquired taste,” says John Gerardi, a sophomore classics and philosophy major who is one of six volunteers qualified to serve the old Mass because of his knowledge of Latin and his training in the traditional gestures, or rubrics. “I know the first time I went I was lost. . . . Once people get comfortable with it, you see a lot who start really preferring it.”

Gerardi’s experience—more than six years’ worth—is hard to come by, which is one reason Benedict’s letter will have limited impact on Catholic parish and campus life. Eleven priests attended a training session that Perkins and Father Peter Rocca, CSC, rector of the Basilica of the Sacred Heart, set up to prepare for the Mass. Some were older priests who wanted to get reacquainted with rubrics they hadn’t practiced in decades. Others were younger priests who, Father Nicholas Ayo, CSC, warns with a smile, will have “quite a bit of homework” to do.

Ayo celebrated the old Mass for 11 years after his 1959 ordination and, though he prefers the new missal and believes Catholics would get more out of it if they were better instructed, volunteered because he was capable. “If we’re going to do it at Notre Dame, we’re going to do it right,” he says.

“The language comes easily, [but] I’m having to look at the book and read what it tells me to do, when that should all be done by memory and routine,” he says. “It would become contemplative for me, too, if it was just second nature.”

Father Warner sees the reintroduction as a learning opportunity for students, too. Before the first Mass, campus ministry hosted a series of talks explaining the Eucharist, the history and theology of the Tridentine Mass and the meaning of the Vatican II reforms. “We had three excellent presentations, good questions and a lot of interest on the part of the students,” he says.

Walter and Gerardi believe that interest will only grow in the years to come. They hope the low, recited Mass in Alumni Hall may be joined by the occasional high, chanted Mass in the Basilica and by baptisms and weddings in the Tridentine form for those who request them. But for Warner, whether interest waxes or wanes over time is beside the point. “What matters for me is that people truly feel nourished by our encounter with God through the Eucharist.”