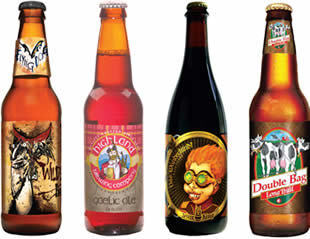 “He was a wise man who invented beer.” High praise, coming from the likes of Plato. The drink is as old as civilization, and among its qualities, beer folk say, is the fact that the right one can go with just about any food. Domers in the craft brewing industry hereby make their “case.”

Exhibit A: Wildeman Farmhouse IPA
Genius behind it: Flying Dog Brewery, Frederick, Maryland
Irish connection: Ben Savage ’99, VP of brand development, and Holly Manthei ’00, director of noise
Description: “A beast of a Farmhouse IPA [India Pale Ale] with citrus, spice, earthy funk and extreme hop bitterness.”
Recommended food pairing: “This complex Farmhouse IPA is best paired with equally complex foods that can stand up to the monster,” says Savage. “Rich, buttery cheeses, pungent and earthy truffle flavors, or bold, spicy cuisines like Szechuan and Thai go beautifully with Wildeman. And, like most beasts, it can be tamed with rich, dark chocolate, preferably with citrus or chili notes.”

Exhibit C: Das Wunderkind! Sour Saison
Genius behind it: Jester King Craft Brewery, Austin, Texas
Irish connection: Jeff Stuffings ’02, owner, brewer
Description: “Traditional, sour, low-gravity saison aged in oak wine barrels with naturally occurring wild yeast and bacteria from the Texas Hill Country.”
Recommended food pairing: Randy Mosher, author of Tasting Beer, offers substantial salads, chicken and richer seafood dishes as the way to go with saisons, but Stuffings isn’t ready to make a pronouncement. “We take food and beer pairings seriously, so we don’t want to just throw out some conjecture. We also believe that food pairing recommendations should include a recipe, since a particular dish may have a range of flavor profiles.” Well said, Jeff, and this magazine is ready when you are.