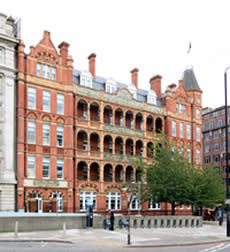 Sometimes looks can be deceiving.

For Londoners and tourists zipping past the red brick and brown terra-cotta building along Waterloo Road, the imposing letters stretching across much of the fifth floor identify the place as “The Royal Waterloo Hospital for Children and Women.” Smaller signs on descending floors inform passersby that the hospital is “Supported by Voluntary Contributions” with “Patrons” such as His Majesty King Edward VII, Her Majesty Queen Alexandra and the Prince and Princess of Wales. On the ground floor, over a door, there’s even direction to the “Out Patients Department.”

But spend some time examining the building, which appeared as “The Royal Veterans Hospital” in the 2009 movie Sherlock Holmes, and you see a modest plaque mounted next to the entrance with the phrase “Conway Hall” on one line and “University of Notre Dame (USA) in England” right below.

For the first time, Notre Dame has a student residence beyond campus it can call its own. Restoration of the art-nouveau façade — the 1823 building previously was rebuilt in the early 1900s — went hand-in-hand with a complete renovation of the interior.

The result, made possible with a gift from Notre Dame trustee Robert M. Conway ’66 and his wife, Ricki, can accommodate 268 students in 50,000 square feet of living space. The building now houses a chapel, an activities center, common rooms, study areas and flats that house four to eight students apiece. Completed at a cost of $62.1 million, Conway Hall opened last August, more than four months ahead of schedule.

At the dedication Mass on January 20, Rev. John I. Jenkins, CSC, ’76, president of Notre Dame, pointed out in his homily that the date marked the anniversary of the death in 1873 of Blessed Basil Moreau, founder of the Congregation of Holy Cross. Moreau, a French priest, had dispatched another French priest from his order, Edward Sorin (along with six Holy Cross brothers), to the United States to found a school.

The Notre Dame that Sorin established in 1842, according to Jenkins, now sends more than half its undergraduates to study abroad. Moreau’s international vision — he also sent religious to Algeria, Canada and what’s known today as Bangladesh — animates Notre Dame in a similar way.

In 1964, the University launched its first study-abroad program in Innsbruck, Austria. Today, less than a half-century later, more than 40 different programs in 20 countries exist for Notre Dame students and faculty. London’s 400 undergraduate and Law School students each year make it the largest.

Structurally and symbolically, Conway Hall represents the University’s efforts to become more international in its work and more global in its influence.

In his homily Jenkins called London “a center of culture, commerce and communication” as well as “the world’s most international city.” Having both Conway Hall and the University’s London Centre, a 15-minute stroll over the Thames River and through Trafalgar Square, allows Notre Dame to enhance both teaching and research.

What are called “Conway Conversations,” established by English literature Professor Greg Kucich, director of the London Undergraduate Program, bring academics, business figures and artists together for seminars, readings, concerts, debates and informal discussions. In addition, the London Centre, which co-hosts a full day’s discussion about internationalization and London to mark the Conway Hall dedication, hosts a steady lineup of lectures and international conferences with partners that have included Shakespeare’s Globe Theatre and Cambridge University.

Jenkins calls Conway Hall “the largest international residence building for the flagship program of an ambitious international agenda.” That agenda involves two distinct yet related objectives — students and faculty from Notre Dame going abroad at the same time students and scholars from abroad are coming to Notre Dame. Indeed, a few days after the Conway Hall festivities, University admissions officers met with prospective British students at the London Centre.

At a dinner following the dedication ceremony, Robert Conway, senior director of Goldman Sachs in London and a former chair of the academic affairs committee of the Board of Trustees, recalled his own student days at Notre Dame in the 1960s, but he concentrated on the present and future, especially the capacity of overseas study to provide “a transformational experience” in a young person’s knowledge of the world, maturity, confidence and sense of independence.

Bob Schmuhl is the Walter H. Annenberg-Edmund P. Joyce Professor of American Studies and Journalism at Notre Dame, where he directs the John W. Gallivan Program in Journalism, Ethics & Democracy. He taught at the London Centre in 2004 and is teaching there this spring.