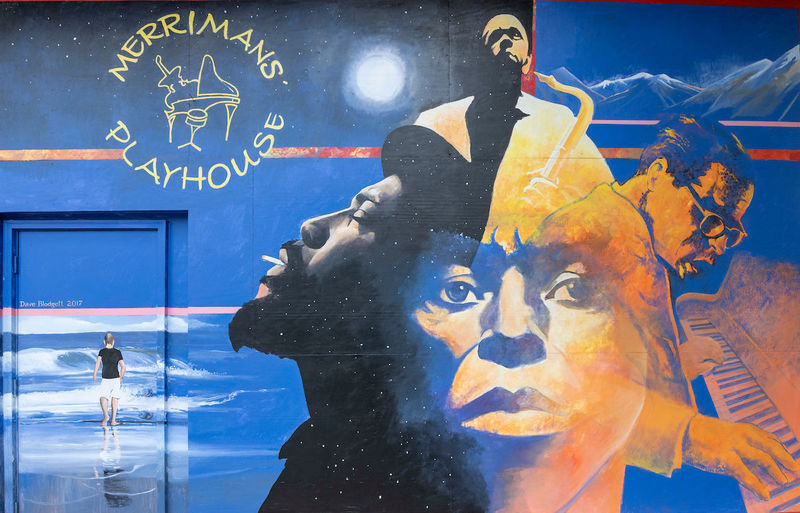 Tucked under a railroad viaduct at the edge of an east side residential neighborhood, the original Merrimans’ Playhouse attracted jazz aficionados but not much in the way of foot traffic. It was a location for the hard core, not for the idle curious who might pass by, wander in for a listen and be transported.

Stephen and Mary Merriman like chance encounters, life’s little improvisations. They had been thinking about moving their club downtown to invite a bit more of that kismet to the Merrimans’ Playhouse experience.

But moving is a big undertaking and the old space had much to recommend it. Paintings, photographs and posters hung on brick walls that enhanced the atmospheric and acoustic aesthetic in a “sonic art gallery” that attracted touring acts to play for hushed, attentive audiences. A maximum of 49 people could squeeze in, creating a feeling, even after multiple visits, that you had discovered something hidden and cool. A secret.

As evangelists for jazz, though, the Merrimans are not trying to keep an esoteric art form to themselves. Stephen’s a drummer, Mary plays bass, plus they host a radio show, hold a weekly open session for local musicians and present a summer series at the Snite Museum of Art, in addition to booking the club’s featured performances. Their mission is to share the music, so they kept an eye out for a more central spot, but without much urgency or luck.

Then came the coronavirus shutdown, an existential threat to niche places like Merrimans’ Playhouse. In their case, the crisis served instead as the impetus to get up and go. With concerts canceled anyway, why not fill the empty calendar with a move that might have needed just such a nudge to make a reality?

One Sunday afternoon, out scouting, the Merrimans ran into developer Dave Matthews. They’ve known Matthews for years — he has a piano the Merrimans refurbished in their primary business, Merrimans’ Complete Piano Service.

“There he was, walking his young little child,” Stephen Merriman says. “They were just kind of strolling around, so it was real impromptu, real spontaneous — the kind of meetings that we love.”

Matthews is building a 10-story downtown apartment complex with a grocery store and pharmacy next to The Commerce Center, a circa-1901, red-brick building along the East Race Waterway, that he also owns. A jazz club in The Commerce Center could be a cultural anchor for the envisioned downtown hub around the new apartment building that’s expected to be complete next spring.

Like that, Merrimans’ Playhouse had found its new home. They hope to reopen in July with capacity more than doubled to over 100 people — appropriate social distance permitting — in an ideal location “to have that cross-section of our culture be able to just stumble on it,” Merriman says.

The ambiance that prevailed back in the old place, they promised themselves and their regulars, would be transferred intact. The same sound quality — curtains that once hung in Notre Dame’s Washington Hall will contribute to the acoustic effect — the same intimacy between the audience and the musicians, the same reverent vibe.

Only the size and the serendipity will be different.