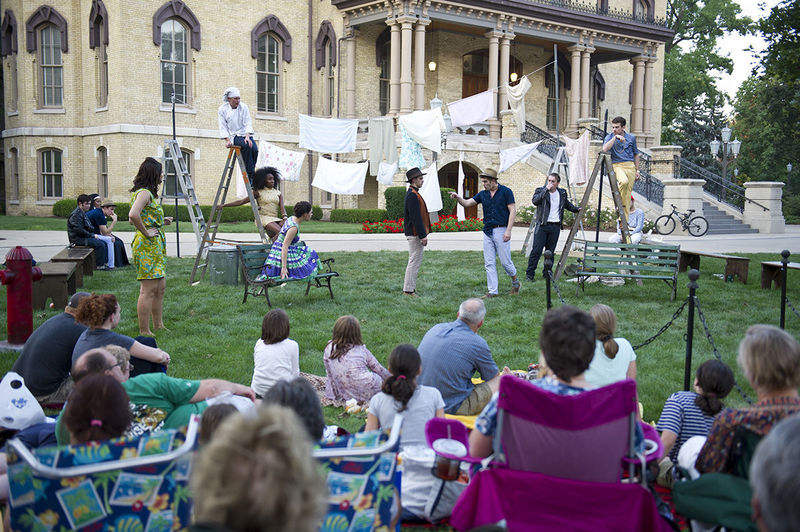 During a typical summer, the Notre Dame Shakespeare Festival produces one of the highlights of South Bend’s annual arts calendar with its multiple professional, community and student productions, the latter performing outdoors at parks, band shells and botanical gardens all over the area.

But the city doesn’t lack for drama — or comedies or musicals — the other months of the year.

A vibrant collection of theaters maintains a year-long schedule of productions that are diverse in content and form — and that doesn’t count the works produced by other collegiate theater departments in the area, the touring productions that American Theatre Guild brings to the Morris Performing Arts Center, or the dozen or more theaters located in the Indiana and Michigan counties that surround South Bend.

Some operate year-round, and others produce only in the summer. Their seasons range from three or four productions per year to as many as 14 at Civic, the city’s oldest and largest theater. Some stage elaborate productions, while others have adopted a minimalist aesthetic.

“There was a time in South Bend when you really could see all of the theater,” Civic Executive Director Aaron Nichols says. “Now, I find it challenging to see all of the shows.”

In the 1980s, Civic — founded in 1957 by a pair of Notre Dame alumni — The Acting Ensemble and the Presbyterian Players all operated in South Bend. Soon, only Civic remained, but after Jim Coppens became its executive director in 1995, it underwent more than a decade of growth that laid the groundwork for today’s scene.

Since then, Civic has trained more than a generation of theater artists through its productions and education programs, which include classes and youth performances.

In 2007, Civic moved from the 77-seat Firehouse Theatre that had been its home since 1968 into its current location on Main Street, where it has a 70-seat black box and a 200-seat mainstage, spaces that give it flexibility in the shows it produces. Hence, the large-scale musical Xanadu and the three-hander drama Copenhagen both appear on Civic’s 2020 season.

Most of the city’s theaters don’t have that luxury.

Active from 1981 to ’91 and again since 2010, The Acting Ensemble is renovating its own building in Mishawaka after years of operating out of a storefront in South Bend.

United Youth Theatre is based downtown at Century Center, but to greater and lesser degrees, the other theaters are more peripatetic. Most have opened within the last six years or so, and reflect the emergence of younger leadership that has marked local politics and the city’s business community. United founders Clare Costello and Drake Shrader are still in their 20s, while Alex Price and Joshua Louis Maurer opened 574 Theatre’s debut show, The 25th Annual Putnam County Spelling Bee, in May 2018, the same month they graduated from Bethel University in Mishawaka.

Each theater fills a different niche, although there is some overlap, particularly with the theater industry’s biggest moneymakers — musicals. Five of the seven stage them somewhat regularly.

Even there, variety exists.

574 Theatre produces older, popular musicals, such as Annie and The Sound of Music, and newer ones, such as 2013’s Big Fish and 1995’s theatrical song cycle Songs for a New World.

Similarly, Civic and the South Bend Symphony Orchestra were teaming up to stage West Side Story until COVID-19 forced its postponement to 2021. Two years ago, however, it staged Lin-Manuel Miranda’s In the Heights with Notre Dame student Jorge Rivera-Herrans ’20 in the lead.

Art 4 defines itself as a “chamber-size musical theatre.” It produces contemporary shows that appeal to younger adult theatergoers and have casts of fewer than 10 people. Its 2020 season includes 35mm: A Musical Exhibition, which it plans to stage at the South Bend Museum of Art in conjunction with a photography exhibit.

Michiana PlayMakers and The Acting Ensemble stick to plays, especially newer and more experimental ones that are often topical and almost always intellectually challenging.

Taken together, it makes for a remarkably busy theater calendar for a metro region the size of South Bend’s.

Andrew Hughes is arts and entertainment editor at the South Bend Tribune, where he has worked since 1993.