What’s it like to be deaf at Notre Dame? Low-income? Transgender? Undocumented? These questions may flit through students’ minds occasionally, but at the six-year-old student production Show Some Skin, they — and others like them — take center stage. 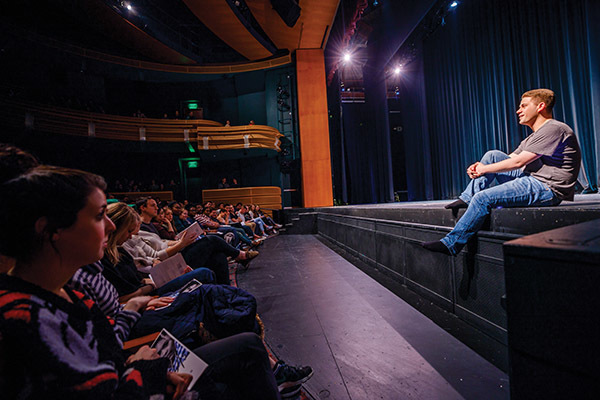 Taeyin ChoGlueck ’14, ’17MFA conceived of the show for then-dean Hugh Page’s First Year Challenge, a competition asking freshmen for proposals that dealt with an issue of local or national importance. ChoGlueck’s contest-winning idea sought to address issues of race on campus and, with the help of faculty advisors Cecilia Lucero ’84 and Nicole MacLaughlin, became Show Some Skin, a series of monologues written and performed by students about their experiences with race. Since its first staging in ChoGlueck’s sophomore year, the show has grown into a campus institution devoted to all things identity — racial and otherwise — and a platform that organizers say is critically important at Notre Dame.

“A whole unexamined part of the student experience is that you are interacting with all of these people” — black, white, immigrant, disabled, gay — MacLaughlin says. Show Some Skin, she adds, stirs a simple question into this ever-bubbling mix: “What do we need to understand better about the humans we interact with on a daily basis?”

Even as the University becomes more diverse, certain demographic facts remain. The Class of 2021 is 68 percent white American and 81 percent Catholic. Much of the student body comes from wealth. All voices are welcome in Show Some Skin, but on a campus that can be “almost monolithic” in its race, religion and tax bracket, Lucero says, the show has a particular passion for elevating the stories of those on the margins.

How does the show’s production crew find material? They ask for it.

Each fall, the production team puts out a call for stories. All members of the Notre Dame community are invited to share their experiences anonymously — anecdotes from their lives, deep and traumatic secrets, even one- or two-sentence questions or observations — via Google Forms. Even those students who want to attach their names to their submissions can’t; the show takes secret-keeping as seriously as do priests in the confessional. If you fear identification or even reprisal when submitting your story, the thinking goes, you’re less likely to share your most vulnerable thoughts.

Once the submission window closes, the team sorts through the stories — this year numbering nearly 100 — and chooses a few dozen. From there, they hold auditions and assign the unedited monologues to performers, matching races and genders to scripts whenever explicitly needed. Then the arduous process of rehearsals begins. 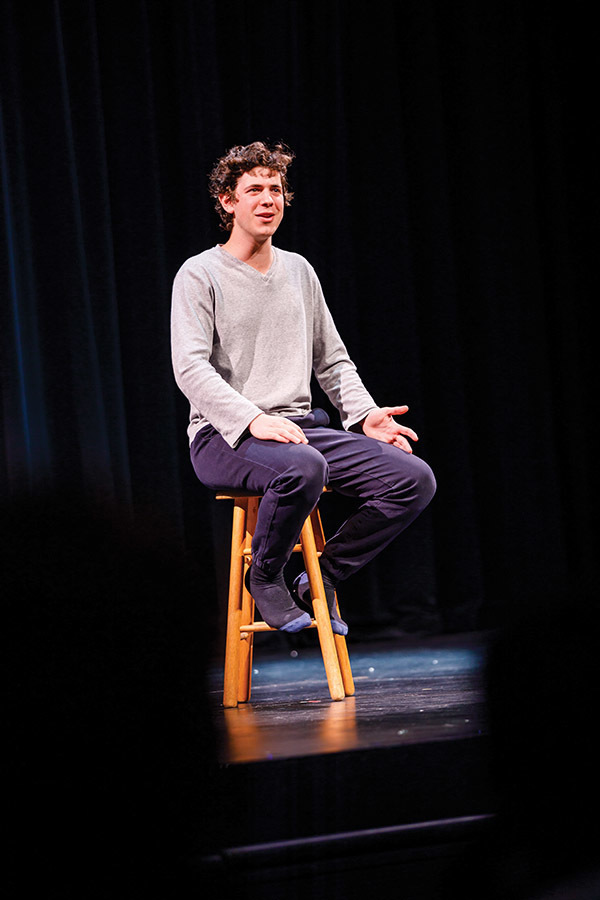 “The transformation was really within the rehearsals,” said cast member Adam Kulam ’19. “Hearing these stories and seeing these people, who I had never met before, all of a sudden inhabiting these very, very touching and vulnerable stories. . . . The rehearsals for me were probably the most impactful part.”

They’re also a significant challenge. For one thing, the cast isn’t always comprised of seasoned actors. Many, like Kulam, have never taken the stage before joining Show Some Skin. Further, the show deals with heavy subjects. From a monologue recreating the scene of a sexual assault to a piece documenting a family torn apart by an immigration raid, many performances brought the audience to tears. Embodying those stories day in and day out can take its toll on the actors.

So why take on a project with such emotionally draining subjects whose authors will never receive credit? The better question, organizers say, might be, “How could you not?”

“What we hope to do,” MacLaughlin says, “is engender a larger culture on campus where it’s OK to voice that you don’t feel included. We don’t always have a good language or strategies for really trying to talk about these issues in ways that resonate with people and their real experiences.”

This year’s student producer, Natasha Reifenberg ’18, agrees. “I like debating and all of that stuff,” she says, “but what’s so amazing about this model is that storytelling is so non-hostile. It’s not an argument. It’s someone’s lived experience.”

'Storytelling is so non-hostile. It’s not an argument. It’s someone’s lived experience.'

Organizers say the storytelling format, as opposed to a lecture or town hall conversation, is crucial to engaging the student body on these difficult questions. Campus response backs up that assertion. This year’s three February shows sold out within hours — despite a move to a larger-than-ever venue in the DeBartolo Performing Arts Center. The production boasted 30 campus sponsors, ranging from academic departments to residence halls. Many professors urged or required their students to attend, and cast and crew members visited classrooms throughout the year to bring monologues and discussions to students who couldn’t make it to the theater. An abridged version of the show appeared in freshman orientation programming for the first time this year, and a production at Indiana University South Bend in April marked the project’s first off-campus performance.

Some monologues gave concrete suggestions for improving Notre Dame life, like allowing Flex Points at laundry machines for students who can’t afford to load up on Domer Dollars. Others raised bigger questions — for instance, how does it affect Notre Dame women to know that they can grow up to be anything . . . except president of their alma mater? 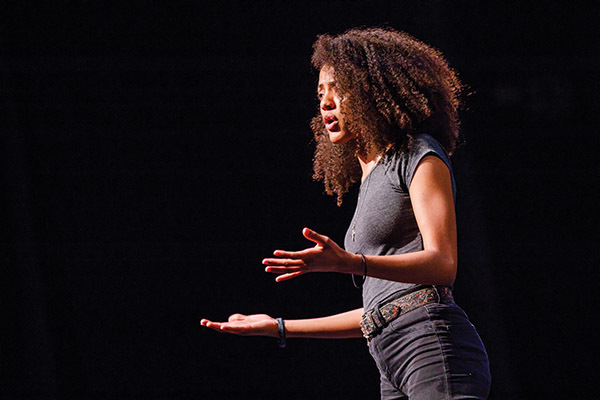 Among the buzziest catchphrases on campus these days is one coined by University President Rev. John I. Jenkins, CSC, ’76, ’78M.A., at a prayer service following the 2016 election: “Either we are all Notre Dame, or none of us are.”

One of this year’s monologues took issue with that notion, essentially asking, “Are we really all Notre Dame?” No matter the day-to-day climate of the campus, within the confines of Show Some Skin, the answer is a resounding yes. Whether you’re struggling with racism or struggling to advocate for the unborn, entrust your story with this band of stewards and it will be honored, for three sold-out, tear-jerking, powerful nights.