Lovers of prints and drawings will find delight in the Snite Museum of Art’s current exhibition titled, No Little Art: Dürer’s Apocalypse and Northern Renaissance Prints. Albrecht Dürer’s 16-sheet series The Apocalypse, first produced in 1498 and reissued in 1511, was a sensation. The artist populated the full sheets with imaginative characters, fantastical beasts, and divine figures of all kinds. Retaining a medieval horror vacuii (fear of empty space), every inch of the paper is energized. The flora and fauna vibrate as if electrified. Celestial bodies twinkle and explode.

Dürer was born in 1471 in Nuremberg in an age that saw the arrival of large-scale papermaking and Johannes Gutenberg’s invention of movable type and improvements on the printing press. Outbreaks of the Black Death occurred throughout Europe, and hit Nuremberg hardest in 1482 and 1494, wiping out thousands of lives. A new disease, syphilis, was first identified in 1484. In 1492, a meteor struck the town of Ensisheim in the Alsace region and was believed to foretell doom. These technological developments and historical events laid the groundwork for the monumental achievement that is Dürer’s Apocalypse. 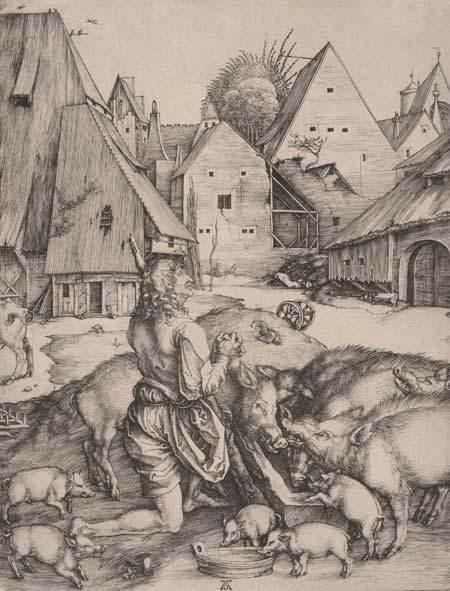 The Prodigal Son (1496) was made during the early phase of his career, although the Snite Museum’s impression was not printed until 1535, after Dürer’s death. This familiar religious subject is portrayed in an unconventional way by using a visual vernacular. Evidence found at archaeological sites in Germany suggests that the village depicted with steeply pitched gables, thatched roofs and arched doorways is an accurate depiction of such late medieval villages in Franconia. He paid close attention to the pigs and in the background placed an unceremoniously cropped steer. This combination of biblical narratives and local scenes makes the message of humility and repentance immediate to a local audience. 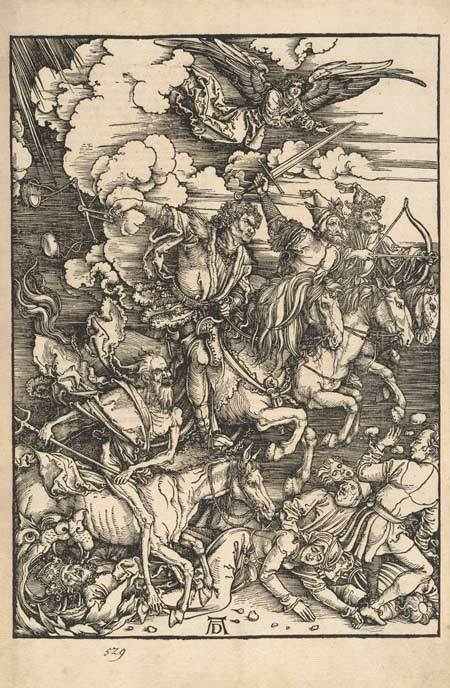 The Apocalypse (1511) is acknowledged as one of the great monuments in art history for technical, iconographic, artistic and economic reasons. It established Dürer’s reputation as a skilled craftsman, an intellectual and a savvy businessman.

Printed on full sheets of high quality linen rag paper, the size alone impressed viewers. Two of the sheets on display bear watermarks from the mill where the paper was produced. It was also printed on more expensive and higher quality paper than traditional woodcuts. Woodcut is a relief process — images are carved into wood (in this case, pear wood) and then inked and stamped so the results are usually small, simple and direct. But Dürer set out to achieve with woodcut the kind of finely detailed image normally associated with copperplate engraving.

Books similar Dürer’s, like the Nuremberg Chronicle which is also on display, were typically the product of collaboration among several different people who designed, executed and funded them. But Dürer’s 16-sheet set is recognized as among the earliest books conceived, designed, and produced by a single artist.

The Apocalypse is especially notable because Dürer afforded the images autonomy from the text. In other books, the images are set into the text. Here, the images occupy the full sheet, and the text is relegated to the verso.

Clients could purchase individual sheets or the entire set bound together. In the Snite’s set hidden by the mats, the edges of the sheets bear residual adhesive and are perforated where they would have been sewn together for binding. Later, the sheets were removed from the binding. Residual glue at the upper corners signals that they were mounted to secondary sheets and probably kept in a portfolio. Numbers inscribed at the bottom reminded viewers of their original order. At that point, the text became irrelevant as it would have been difficult to read attached in this way.

Dürer expanded the market beyond an elite, educated class for The Apocalypse in 1498 by publishing it in both German and Latin. The Apocalypse was wildly successful, so much so that it was pirated in 1502. Dürer addressed this breach by reissuing his own new edition in Latin in 1511. He included a warning on the verso of the last sheet that said his was the only edition sanctioned by Emperor Maximilian I, and publishers of any spurious editions risked having their property confiscated.

This exhibition is organized to celebrate the new acquisition of Dürer’s Apocalypse with funds generously provided by the Estate of Edith and Dr. Paul J. Vignos Jr.