One of the most remarkable American photographers of the 20th century, known for his sweeping and grand views of the American West, Ansel Adams (1902-1984) transformed his medium through stirring images of nature. Some of the most iconic photographs of the American West were captured by him. Visitors to the Snite Museum of Art can view an exhibition of four black and white photographs by Adams taken from the Museum’s collection, and presented in association with the current traveling exhibition, Ansel Adams: Masterworks, on view at the South Bend Museum of Art through January 12, 2014.

Born and raised in San Francisco, Adams first visited Yosemite as a teenager, and later documented his family’s annual visits to the national park with his Kodak No. 1 camera. He was enchanted by the landscape of the American West and spent much of his lifetime capturing its magnificence and beauty. When he was 17, Adams joined the Sierra Club. His first solo exhibition was presented at the club’s headquarters in 1928. His photographs are characterized by their extreme depth of field and crystalline clarity that he combined with careful observation and an ability to capture fleeting effects of light and atmosphere. He developed the “zone system” as a way to properly calculate exposure so that in the darkroom his images would achieve the effects he carefully considered ahead of time. He used his camera and the darkroom to manipulate tones in his compositions that he “preconceived” when encountering his subjects in the landscape. Adams became a noted expert in photographic technique, and his 10 volumes on the process are still considered important source references. 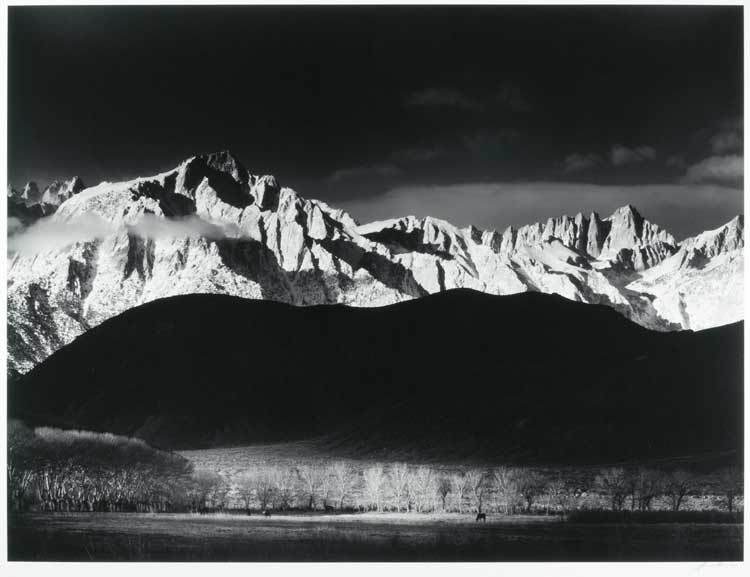 In this photograph included in the exhibition, visitors note a dark area in the middle of the scene. Some viewers believe this surreal mid-zone was a manipulation in the darkroom for effect. In fact, this area is the shadow cast on the face of the mountain range by the mountains rising behind Adams as he was capturing the scene at sunrise.

It is because of the keen eye and masterful technique of this brilliant photographer that this effect could be achieved. In the hands of a lesser artist, this image would have lacked the depth, resonance and dramatic effect of the magnificence of the mountains. It is for these reasons that Adams’ works have been so highly influential to generations of subsequent photographers. His deep focus, intense clarity and dramatic contrasts of black and white have made his images icons for the beauty of the American West.

This intimate exhibition of photographs by Ansel Adams will be on view at the Snite Museum of Art through January 12, 2014 in association with the traveling exhibition in the South Bend Museum of Art.