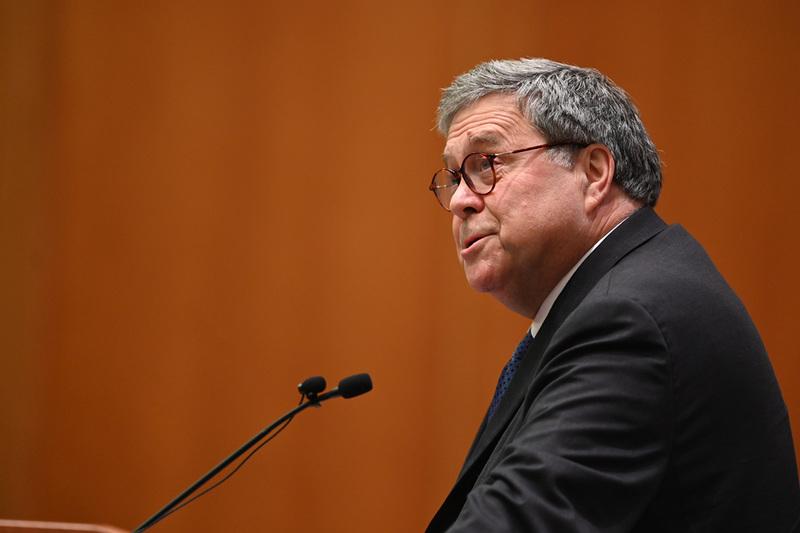 In a speech Friday October 11 at the Notre Dame Law School, U.S. Attorney General William Barr decried the ascendancy of secularism and vowed to do all he can to assure continued religious freedom for Americans.

During the 20th century, the free society of the United States faced off against totalitarianism, standing up and defeating fascism and communism, Barr said. In the 21st century, Americans face the question of whether citizens in a free society can maintain the moral discipline and virtue necessary for the survival of free institutions, he said.

“Modern secularists dismiss this idea of morality as sort of otherworldly superstition imposed by killjoy clergy,” he said. “But, in fact, Judeo-Christian standards are the ultimate utilitarian rules for human conduct.”

Barr spoke in the law school’s McCartan Courtroom to law students and faculty, students associated with Notre Dame’s de Nicola Center for Ethics and Culture, which co-hosted the event with the Law School, and other invited guests. Media were invited to cover the speech, but weren’t permitted to stay for the question-and-answer period.

Barr, who is Catholic, earned bachelor’s and master’s degrees at Columbia University, and a law degree at George Washington University Law School. One of Barr’s three daughters, Margaret Barr, is a 2006 Notre Dame graduate.

The U.S. Department of Justice keeps a regular eye out for cases around the country where states are misapplying the Constitution’s establishment clause in a way that discriminates against people of faith, Barr told the audience.

Over the past 50 years, religion has been under increasing attack, according to Barr. There has been a steady erosion of religion as a guiding force for society and a constant effort to drive it from the public square, he said.

The result, he said, has been disintegration of the family, and increases in violence, depression and drug abuse. He noted that U.S. rate of out-of-wedlock births in 1965 was 8 percent, and today it is more than 40 percent.

“Among the militant secularists are many so-called progressives, but where is the progress?” he asked. “We are told we are living in a post-Christian era, but what has replaced the Judeo-Christian moral system?”

The idea of accommodation for people’s religious beliefs is falling out of favor, Barr said, with the battleground shifting to the states, including cases of public schools being required to adopt curriculum that goes against the religious beliefs of some families.

“As long as I’m attorney general,” Barr said, “the Department of Justice will be at the forefront of this effort, ready to fight for the most cherished of all our American liberties, the freedom to live according to our faith.”

Barr was greeted warmly by the audience, but his visit to campus was not without controversy.

A day before his visit, Notre Dame Law School Dean G. Marcus Cole issued a statement reminding people that the Law School has a free speech policy when it comes to guest speakers.

“Notre Dame Law School will neither endorse nor condemn invited speakers. An institution of higher education must be a place where controversial ideas and points of view are expressed, heard and discussed,” the statement read in part.

As Barr spoke inside the Law School, a group of area residents gathered near the front entrance to campus to protest his visit. The protestors handed out and blew whistles, a reference to the whistleblower complaint that has led to the U.S. House inquiry into the possible impeachment of President Donald Trump.

Barr is a central figure in the impeachment inquiry. Trump, during a July phone conversation with Ukrainian President Volodymyr Zelensky, offered to enlist Barr and Trump’s personal lawyer, Rudy Giuliani, to help the Ukrainian government investigate business dealings of Hunter Biden — son of former vice president and current Democratic presidential candidate Joe Biden — with an energy company in Ukraine, according to a government memo of the conversation.

The Department of Justice has said Barr has never discussed the Bidens with Ukrainian officials and only learned Trump invoked his name months after the call.