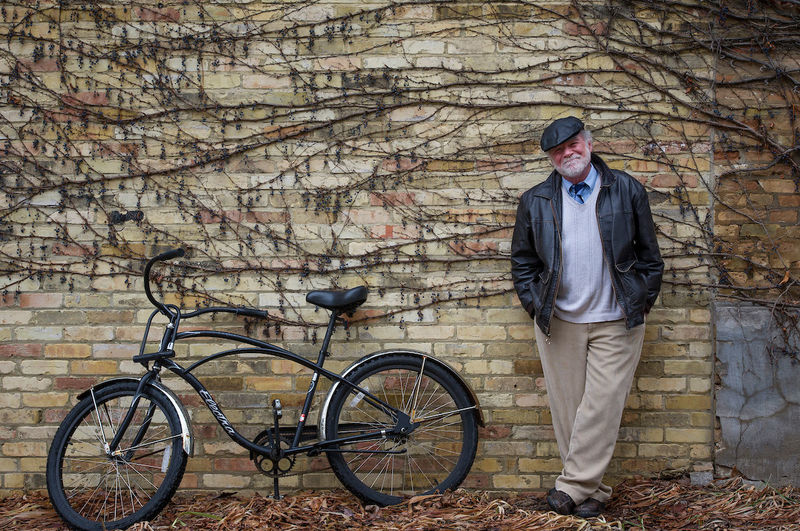 On this, as on most mornings, I ride my bicycle straight south on Juniper Road, gliding across Juday Creek toward the overpass of the I-80 nation-spanner, and on this particular morning, as on several other mornings, I choose to conceive that interstate highway as the ink border of a daily comic strip, which in turn allows me to conceive myself as an untethered cartoon character magically able to traverse a newspaper page from one strip, a fanciful narrative of suburban homelife, to the strip below, a humdrum narrative of workplace doings. What titles should I give them?

A southerly wind gust snaps me out of the daydream, stings my eyes and scrapes my face with tears. This ain’t the funny papers, after all, but reality: Early morning in late November. The broken world bleeds, weeps and waits. Advent is no time for fantasizing.

Sentry duty is what the Advent season is all about. Staying on the qui vive for whatever may be going down. Paying attention and keeping a weather eye, because as the days of Noah were before the flood, so shall the coming of the Son of Man be.

So I resolve at that very moment not to miss a thing: Not the stripped and writhing sycamore branches above me beyond which winter sun-glints perforate shreds of gray cloud, not the clump of underbrush which explodes with starlings as I pass, not the crunch of the silver gravel like rock candy beneath fat bicycle tires. A gray squirrel darts across Juniper a few yards ahead, sees bike and me both, and freezes in defensive adjacency to a roadside hedge; our gazes mutually ricochet, rodent and man both equally alert, measuring and expectant. Whatever the very next nanosecond may bring, we’ll not be caught napping.

Perversely enough, I had, in fact, been caught napping a few mornings before, as the Gospel was read for the first Mass of Advent. “Therefore, stay awake,” the priest (and Jesus) warned those of us who hadn’t dozed off, including my wakeful wife, who obligingly drove her right elbow sharply into my left ribcage, “for you do not know on which day your Lord will come.” I remember furtively regaining consciousness in the bland and airless atmosphere of that overheated chapel, fretting that I may have been audibly betrayed by a snore and not daring to seek a whispered reassurance to the contrary from my wife.

By the time I’d composed myself and retrieved my liturgical game face, the priest (and Jesus) read the conclusion: “So too, you also must be prepared, for at an hour you do not expect, the Son of Man will come.”

The words are there with me as I reach the northern edge of the Notre Dame campus at Douglas Road. The words are always there. I remember an older version, too: “Therefore be ye also ready: for in such an hour as ye think not the Son of man cometh.”

In such an hour as ye think not. The sonorous rebuke in that 17th century phrase is suddenly as palpable as the face-slap of this grit-laced wind. Increasingly aware that each indrawn breath, each heartbeat, each glimpse, each memory is nearer to my very last, how much of myself I timidly surrender to that unguarded hour. The wind, the rebuke and the pang of guilt all coalesce as I wait for the intersection green light, and something very much like a prayer pursues them, something like genuine gratitude for raw wind, for the edginess of an anticipated ambush, for an unexpected elbow in the ribs . . . something like rescue from such an hour as ye think not.

Something like the greeting and kiss of one’s long-lost and very best friend.