“I went to the woods because I wished to live deliberately, to front only the essential facts of life, and see if I could not learn what it had to teach, and not, when I came to die, discover that I had not lived.” — Henry David Thoreau, Walden 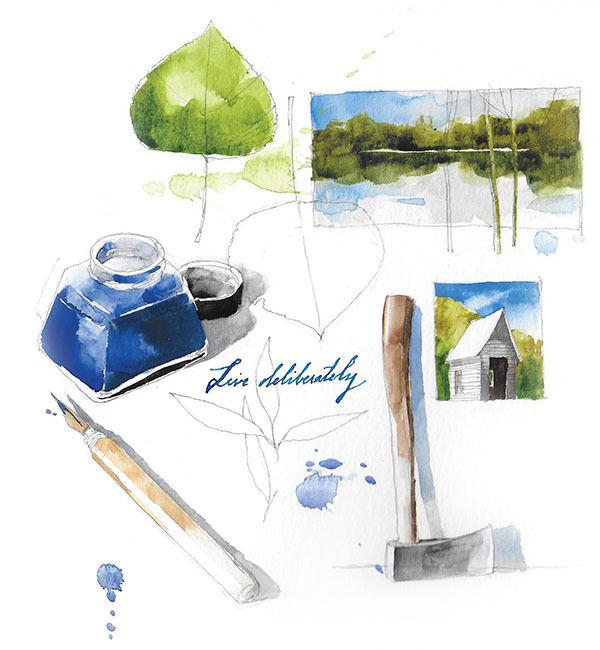 On a low rise of land above a small lake in eastern Massachusetts sits a large, lumpy pile of stones, some rounded, some blockish, some barely more than pebbles and others weighing hundreds of pounds. Many are covered in writing, and most of these are signed — from Japan, Italy, Australia, Germany, every corner of the United States. All are deposited in memory of one man: Henry David Thoreau. Born 200 years ago, on July 12, 1817, in Concord, Massachusetts, this obscure man, the grandson of French, Scottish and English immigrants, died 44 years later famous for two things: going to Walden Pond, and writing a book, Walden, in which he explained why.

Before Thoreau posed the challenge “to live deliberately” to us, he posed it to himself. He grew up the third child of a family struggling to meet the necessities of life. They eventually achieved middle-class comfort thanks to the family-owned pencil factory, which Thoreau himself made profitable through research skills acquired at Harvard College plus an engineer’s curiosity about the workings of systems — intellectual and spiritual as well as mechanical. His home town prided itself as the place where the first shot of the American Revolution had been fired, igniting the war that freed America from the old, feudal world of hierarchy and submission.

From childhood on, Thoreau was steeped in New England’s ideals of individual liberty to forge one’s own path in the world, free before God and man. In Thoreau’s view, those ideals reeked of hypocrisy, for New England’s prosperity was beholden to the system of personal chattel slavery. Though long banned from the North, slavery remained foundational not just to the South but to all of American economic life. Every Fourth of July, Concord, too, celebrated the Declaration of Independence, proclaiming that “all men are created equal” in a nation where, as Thoreau worried tirelessly, more than three million of its people were the legal property of other men. Thoreau saw this crisis as symptomatic of a deep sickness, an intrusive modern system that alienates us from each other, from nature, from God and from ourselves.

He had no name for it — “Economy” came closest — but after failing for a decade to find an honorable place in it, he did have a plan: go to Walden Pond, where his friend Ralph Waldo Emerson had just purchased land; build there a new house and a new self; and weigh every decision he made with care, to learn precisely why he, along with so many of his generation, were living “lives of quiet desperation.”

“I do not propose to write an ode to dejection,” he vowed, “but to brag as lustily as chanticleer in the morning, standing on his roost, if only to wake my neighbors up.”

On the Fourth of July, 1845 — a date chosen “by accident,” he winked — Thoreau hired a hayrick and moved his most essential items of furniture — a desk, a cot, a small table and three chairs — to his new home on Walden Pond: his personal declaration of independence. He would live there for two years, two months and two days, before returning to the town center.

Thoreau was a man of words, a writer and thinker. He read world literatures in six languages — Greek, Latin, French, German, Italian and English (plus a little Spanish when pressed). He paid particular attention to Homer, the “bible” of the Greeks; the Greek Bible of his own Christian upbringing; Hindu, Buddhist and Islamic scriptures; the spiritual teachings of Native Americans. At Walden, he vowed to treat his house as a temple, his food as a sacrament and his writing as scripture for a modern age, when global commerce and industrial capitalism were scrambling all the old ways without offering new ones. Some 20 times a day, Thoreau watched the railroad cars rattle past, just across the pond, carrying raw resources down from the uplands and consumer products up from Boston’s world harbors. He imagined his own book, Walden, making its way overseas to India, melting like a block of Walden ice, mingling with the sacred waters of the Ganges. What, with such hopes, would it mean to “live deliberately”?

As a man of words, Thoreau chose his with unusual care. His word “deliberately” rings with a three-way pun on its roots: libr- for book; liber for liberty; libra for the scales of justice. To live deliberately was to live with the freedom to read the library of the world in its fullness, both written literature and material realities: “Books must be read as deliberately and reservedly as they were written,” opined the man who took nine years to write Walden. And living deliberately meant weighing one’s actions in the world’s scales of justice, with care and without ceasing. Notably, acts of deliberation — as demonstrated by every scene of courtroom justice — are reserved not for the easy decisions but for the hard ones, the agonizing choices that divide conflicting truths and that call, no matter what one decides, for commitment and sacrifice. No wonder, as Thoreau reminds us, we prefer not to make choices at all:

When we consider what, to use the words of the catechism, is the chief end of man, and what are the true necessaries and means of life, it appears as if men had deliberately chosen the common mode of living because they preferred it to any other. Yet they honestly think there is no choice left.

Moving to Walden, on the edge of town by the main road, cast every one of Thoreau’s choices onto a public stage. Back home, living in his family’s boarding house with the pencil factory out back, he’d been invisible. Now everyone who passed by could — and did — inspect his house and his life; as he announced, there was no lock on his door and all were welcome to drop by. Walden was begun in the conversations he held with these passers-by, some curious, some critical, some supportive. To them all he staged his actions as a living performance of his founding choice, to recognize that we do, after all, have choices to make — that we cannot merely inherit our lives. That is, the first commitment made by “living deliberately” is to trade an easy life of submission, without thought, for a life of principled resistance, without rest.

It was while living at Walden that Thoreau was jailed for nonpayment of the poll tax levied on those citizens allowed to vote, a choice he made not because he thought his dollars would fund the state (as he knew, this was a local tax) but to protest state-sanctioned violence: slavery, the Mexican war, the genocide of Native Americans.

Thoreau’s neighbors shamed him for this choice. In response, he wrote a long and respectful lecture in which he explained his reasoning to them, in person, thereby transferring his original act of deliberation into their care. This lecture, published soon after as “Resistance to Civil Government,” was later retitled “Civil Disobedience.” When it came into the hands of Mahatma Gandhi, Thoreau’s dream of mingling his words with the waters of India was at last fully realized. Dissatisfied with the English phrasing, Gandhi devised a new word: Satyagraha, holding to truth. Thoreau, the man of words, would have loved this one. As he entreated in Walden: “Rather than love, than money, than fame, give me truth.”

After stating his own reason for going to the woods, Thoreau admonishes us, too:

Let us spend one day as deliberately as Nature. . . . Let us settle ourselves, and work and wedge our feet downward through the mud and slush of opinion, and prejudice, and tradition, and delusion, and appearance, that alluvion which covers the globe, through Paris and London, through New York and Boston and Concord, through church and state, through poetry and philosophy and religion, till we come to a hard bottom and rocks in place, which we can call reality, and say, This is, and no mistake.

If Thoreau’s goal while living at Walden were to find this “hard bottom and rocks in place,” the goal of the book he wrote there was to show how elusive this “reality” can be. Yet never can we give up the search: “Be it life or death,” he wrote, “we crave only reality.” It’s perilously easy to condescend to the past; we know how it all turned out, and, after all, it turned out well enough — at least it did so for us. But the world of 1840s America felt, to those who lived it, just as fraught and tightly wound as our own. Living deliberately, then or now, offers no solutions, only a way to live with the difficulties. In Walden, Thoreau wrestles hard with life but finds no formula for living well — other than this: “Drive a nail home and clinch it so faithfully that you can wake up in the night and think of your work with satisfaction.”

The carpenter’s task of building a life is bequeathed to us all. Every rock laid on the cairn at Walden Pond tells the path of one more seeker who found, in Thoreau’s quest, a brother to our own.

Laura Dassow Walls is Notre Dame’s William P. and Hazel B. White Professor of English and the author of Henry David Thoreau: A Life.