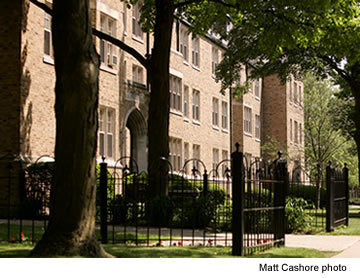 They Call Themselves: Babes since 1999; before that, Banshees

Named for: Brothers-in-law William P. Breen, class of 1877, an attorney, and Frank B. Phillips, class of 1880, a banker. The two benefactors were both from Fort Wayne, Indiana. Breen was a charter member and first president of the Notre Dame Board of Lay Trustees, established in 1920 by then-President James A. Burns, CSC. For many years the University awarded the Breen Medal for student achievement in oratory.

Distinguishing Features: The only hall with a hyphen, B-P enjoys one of the most convenient locations on campus, steps away from the library, LaFortune Student Center and North Dining Hall. The Puzzle Room in the basement is actually a study lounge named for the jigsaw puzzles that adorn the walls. B-P is also known for its lively Sunday liturgies, held in the hall’s sunken chapel. The building’s cornerstone contains mementos from Breen and Phillips’ days as students.

History Made There: Breen-Phillips, Cavanaugh, Alumni, Dillon and Zahm halls all quartered naval officers in training during World War II. At one time the hall housed the entire athletic department in its basement. Coach Frank Leahy had an office there. Pope John Paul II imparted an Apostolic Blessing on Breen-Phillips in 1984.

He Lived There: Astronaut James Wetherbee ‘74, a veteran of six space flights and currently technical assistant to the director of the Safety and Mission Assurance Directorate at the Johnson Space Center.

Lore: For a while in the ’60s the dorm was known to many as Stalag B-P, a takeoff on the 1953 film Stalag 17 about a German POW camp during World War II. The nickname referred to B-P’s rector at the time, who had a reputation for his strictness and also happened to be of German descent. The hall’s Babes intramural teams nickname has dual origins: the 1998 movie Babe: Pig in the City and a good-natured nod to B-P’s reputation as “the fat dorm.” The notion that B-P residents are all overweight dates to a contest some years ago sponsored by an off-campus ice cream eatery. It wanted to find out which dorm bought the most ice cream cones. For some reason every time the men of Keenan Hall went there they said they were from B-P. The women’s hall thus became identified, unjustly, as the largest consumer of ice cream. B-P fat jokes have been a staple of the Keenan Revue for years. A second moniker, “Bay of Pigs,” likely results from the coincidence of initials. As men gave up the hall to women some left mementos behind. Several female students in the ‘70s reported former male residents showing up in their rooms on football weekends to retrieve a “time capsule” they had secreted behind the mirror above the room’s sink.

Traditions: Each spring the women of B-P host a Beach Party filled with beach-themed activities and contests. The dorm’s signature event is the B-P Meal Auction, which raises money for the American Diabetes Association. Students bid on meals with coaches, faculty, staff, rectors and other campus celebrities. This past year’s event raised more than $5,700. The morning of the first home football game, B-P residents march to the North Dining Hall in pajamas and bathrobes for their traditional Bathrobe Breakfast.