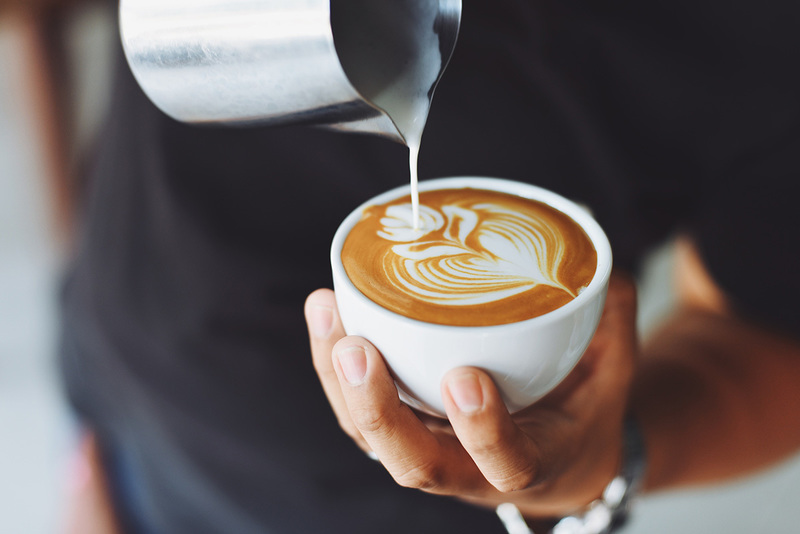 Co-founders Karen Haun and Jill DeLucia ’78 started roasting coffee together when they were IT employees in the Bosch automotive plant on South Bend’s west side. Now Haun, who bought DeLucia’s share of the company in 2017, sells bags of Bendix’s signature blends to stores and coffee shops all over the area. The company doesn’t have a café, but you can pick up a bag of Bendix at Purple Porch Food Co-op, Bamber’s Superette Food Market, South Bend Brew Werks or Chicory Café, or taste its pour-over coffee at The Local Cup and other venues. If you’re lucky, Haun will give you a tour of the facility in the historic Bendix-Bosch factory. (Another perk: Bendix delivers orders via bicycle, weather permitting.)

Before you set foot in The Local Cup, your coffee has been paid for. That’s right. The cozy shop with mismatched chairs inside the Near Northwest Neighborhood building operates on a “volunteer-run, pay-it-forward” basis. Two couples, Catherine ’98 and Mike Griffin ’93, ’04M.Div., ’14Ph.D. and Brook and John Hardy, created The Local Cup, but they don’t consider themselves owners — after all, it’s not so much a business as a community hub. Open on Friday and Saturday mornings and Sunday afternoons, the neighborhood spot has garnered a devoted fanbase since its launch in 2015. Guests are encouraged to give as much or as little as they want to a tip jar — the shop only recently started accepting credit cards. Neighborhood teenagers known as “student interns” prepare pour-over blends of Bendix or Zen coffees. “We like to think this is the kind of place Pope Francis would want to hang out,” Mike Griffin told former South Bend Tribune columnist Heidi Prescott in 2015. “He talks about places for encounter. Places where people can be in dialogue with one another.”

If the phrase “third wave coffee” means anything to you, Zen Cafe, established in 2010, should be high on your list of South Bend stops. Roasting takes place at Zen’s headquarters inside LangLab, the former-factory-turned-event-space on the south side that also houses The Elder Bread bakery and Violet Sky chocolatiers. Beans are ethically sourced from Honduras, Nicaragua and Colombia, and bags are available for purchase at Purple Porch, The General Deli and Cafe, Crooked Ewe Brewery and Ale House and Whole Foods Market in Mishawaka, or ordered directly from their online store, zencafecoffee.com. (The Honduras honey-washed blend is excellent.) Owner Shaun Maeyens, bar manager Tyler Sutch and roaster Kel Stombaugh recently opened a second location in an uber-chic space across from St. Joseph Catholic Church — think exposed brick, lots of light and a groovy Synesso MVP espresso machine.

The General Deli and Cafe

You’ll likely see a new local artist featured on the walls each time you walk into this colorful café with views of Howard Park and the river. In 2016, Paul Kuharic and John Barany ’85 launched the eatery in an old general store and decorated it with an eye for art and upcycled ephemera. Generous seating around big wooden tables makes the place ideal for groups. Order a latte in an oversized mug and try one of their many deli sandwiches made with locally sourced meats. Noteworthy items include The General, a scaled-up grilled cheese with cheddar, feta, pepper jack and tomatoes, and a Paul Strami, a pastrami, swiss and brown mustard on rye named for the shop’s co-owner.

After graduation, Nora McGreevy, a native of South Bend, interned at The Boston Globe and was at Washingtonian magazine.