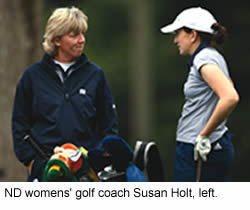 Now name a woman who coaches a men’s team. Hmmm.

When Congress enacted Title IX of the Educational Amendments of 1972, the legislation prevented gender-based discrimination in activities at high schools and colleges that receive federal funds. It heralded epic changes in women’s athletics programs.

But will women ever coach men?

John Soares has posed this question to his “Sport in American History” course at Notre Dame for the past five years. Until last autumn he had always received the conventional wisdom: No.

In a commentary the assistant professor of history delivered this spring on Michiana’s National Public Radio affiliate, Soares outlined common reasons his predominantly male classes of 35 students had given for dismissing the idea: differences in the rules between men’s and women’s games, possible locker room awkwardness and, finally, most women’s lack of what male athletes might consider an imposing physical presence.

Counterarguments offered by Soares and dissenting students included the fact that male U.S. coaches have won at the Olympics under international rules, that men coach women’s sports and that Lou Holtz, as one example, is less than physically imposing. These had failed to persuade the majority.

The response from this year’s class was different. “For the first time ever, students accepted that a woman will one day serve as head coach of a men’s team,” Soares says. Even more interesting, he adds, is that while the gender gap is closing in his classroom, “it was male students who were talking about women coaching men as though it would happen.”

One of Soares’ students, Jay Fitzpatrick ’09, attributes the shift of opinion to an overall rise in female leadership, which Soares speculates may be a natural consequence of a year in which one woman ran a nearly successful presidential campaign and another became a vice presidential candidate. “You see women advancing every day into the highest levels of different fields, so I don’t see why that wouldn’t happen in male sports,” Fitzpatrick says.

“If you were to make a list of top 5 coaches in college basketball, [Tennessee Lady Vols Coach] Pat Summitt would have to be on that list,” he adds. Stephanie Ready is another woman who, Soares and Fitzpatrick note, made history within the last decade by becoming the first woman to coach a professional men’s team in the National Basketball Developmental League, a branch of the NBA, in 2001.

“We have reached the tipping point in terms of women’s sports being taken seriously, that they’ve seen this often enough and long enough that it is more acceptable to them,” Soares says of his students. “I think it’s a combination of improved athletic skill level, media exposure and seeing women in leadership positions in so many walks of life.”

Still, the trends in college athletics don’t favor female coaches — even in women’s sports. A 2004 Brooklyn College study found that only 44 percent of women’s teams at the college level had a female head coach — a proportion that has dropped steadily from over 90 percent in 1972.

Casey Wagner ’09 is one of many students who say they gained a lot from Soares’ course. A former member of the Notre Dame women’s swim team, Wagner believes the success of a coach has nothing to do with their physical strength or their player resume, but instead with bigger issues like knowledge of the sport and motivational skills. Most important is the ability to command the trust and respect of the team.

“If the male athletes have that trust in their female coach, I think it can work,” she says. “If you don’t trust what your coach is doing, you’re never going to have respect for him or her.”

Amber Travis was the spring 2009 intern at Notre Dame Magazine.