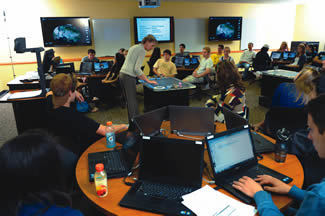 In a less heralded move, the iPads traveled across campus in mid-October into the hands of students in Rev. Hugh Page’s freshman seminar on contemplation for a different kind of classroom experiment. This spring, corporate law students will take their turn with the University-owned devices before possibly handing them over to the Hesburgh Library’s audio-visual resource center, where librarians are researching ways for music and film students to use the iPads to listen to or watch assignments.

Right now, the possibilities seem endless for the iPad, which was released to the public in April 2010. So do the potential benefits.

“Almost immediately from the point that we started getting media attention on this, I was getting emails from alumni and even just anyone out there in the business world saying, ‘We use these in our corporate setting, so it’s great that students are beginning to incorporate this into their education,’” says Angst.

The iPad-driven courses are part of a pilot study by Notre Dame’s ePublishing Working Group to evaluate the usefulness of various technologies in the classroom. The group represents colleges and administrative units across campus, from the Mendoza College of Business to the bookstore. With the iPad — a portable, full-color touchscreen device with multimedia, Internet and annotation capabilities — the group wants to see how an electronic reader encourages learning both in and out of the classroom.

Angst’s Project Management students used their iPads to share documents, timelines and to-do lists while managing projects for local clients such as the Center for the Homeless, Innovation Park and Anthony Travel. The students met with their clients outside of class time, and most say that the iPad was a convenient tool during meetings.

“The iPad is a fairly unobtrusive device,” says Jon Crutchfield, an academic technologies consultant in the Office of Information Technology (OIT). “If you bring a laptop, you open the laptop and then there is a barrier between you and the other people.”

“It was helpful to have a small device to pull up documents and record minutes on,” says senior Taylor Osicek, a Project Management student. “It was also helpful to be able to update our progress electronically in real-time without a laptop. We were able to build charts on the devices, too.”

The students in Page’s one-credit seminar, Contemplation and the First Year Experience, used the iPads in a different way. The final project for the class involved creating a map to a quiet, contemplative space in nature; journal entries; producing a podcast; creating a music playlist; and cutting and editing a digital video. Students typically perform these tasks in different mediums. This time they did it all on the iPad, even using an application that enabled them to handwrite their journals with a stylus.

“The possibility of doing a case study and seeing whether technology could be used in a slightly different way, with first-year students, was kind of exciting,” says Page, dean of the First Year of Studies. “We, as a society, haven’t figured out how to use technology to disengage and enjoy life and have a deeper appreciation of the world and the people in it.”

Page sees the iPad as a “bridge technology between an older mode of communication and a newer one.” With laptops and other devices that require keyboards, he says, a certain creative capacity is lost. But with the iPad, there are ways to be creative, to draw and write by hand, without losing all the benefits of modern technology. Page says he designed his class to “muddy the waters with regard to the tendency to see technology as either good or bad. And it will encourage students to be more actively engaged in how they utilize technology.”

Student feedback was overwhelmingly positive at the business school. Professor Angst solicited opinions through surveys, emails and class discussion, recording the results on his blog, teaching-with-angst.blogspot.com. Osicek, for one, says it took some adjusting to the iPad’s touchscreen interface, but she did enjoy using the iPad in class.

Jon Crutchfield of OIT says that this touch-based environment is actually what makes the iPad easy to use. His 2-year-old daughter quickly grasped the concept, using his iPhone to play a children’s game. “It takes very little mental energy to figure it out,” he says. “It’s ‘I touch, and something happens.’”

The iPad is not the only technology the ePublishing Working Group and OIT are investigating. Two new high-tech classrooms on campus, one in Mendoza and the other in DeBartolo Hall, encourage group work with white board walls, laptops and display screens for collaboration. The classrooms have two 60-inch monitors on each wall, where professors can display what is on any laptop screen to share with the rest of the class. This semester, these rooms host classes in Business Problem Solving and Multimedia First Year Composition.

Many professors also use a technology called Poll Everywhere, which allows students to text answers to questions professors pose during a lecture. Students can use Poll Everywhere through cell phones, laptops or any device with a web browser, so it does not limit those students without text messaging, or with limited plans. The professors receive the answers and can tally the results and give students credit for each response. OIT works with professors to ensure that there is adequate cell phone coverage in their classrooms to support the technology.

Crutchfield and his colleagues even think about how furniture relates to classroom needs. They use comfortable chairs on wheels to facilitate classroom collaboration. “There is a place for the large auditorium, the lecture hall, the seminar room,” says Crutchfield. “It’s just finding what works and helps support the faculty the way they want to teach and then putting those pieces of technology in the right way, in the right places.”

The iPad was chosen for the study in part because it is one of the only e-readers that allows for highlighting and note-taking, though students found it much more difficult to annotate on an iPad than on paper. “For someone like me who loves color-coding my notes with highlighters and gel pens, annotating on the iPad was a little restrictive,” says Osicek.

Perhaps the biggest problem with e-readers now is the variety of publishing formats and the limited availability of electronic books. And many e-textbooks can only be “borrowed” for about six months before the license expires or the student pays an additional fee to own it. There is also no standard publishing format, so an e-book that works on the iPad would not be compatible on Amazon’s Kindle. “It’s a huge battle in the industry right now, which format is going to win out,” says Ronald Kraemer, vice president of Information Technology at Notre Dame.

Still, the seers of OIT predict vast changes ahead in the way students buy books. Instead of purchasing traditional textbooks, future Domers might one day go to the bookstore and pick up an iPad that’s been loaded with all their course readings.

Maura Sullivan was the magazine’s student intern during the autumn 2010 semester.