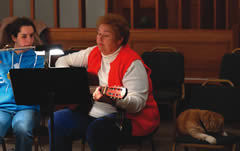 “Never a dull moment” is how Notre Dame’s longest reigning rector, Sister Carrine Etheridge, IHM, sums up her 16 years in Farley Hall. Need proof? How about the day someone’s pet iguana got loose, running up and down the corridors “scaring the bejeebers out of all the housekeepers and residents"? Or there’s the time a couple tried to make pancakes in the Farley kitchen but instead set the dorm on fire. (That one caused maximum excitement but minimum damage, fortunately.)

Or then there’s the “Great Rope Ladder Episode,” when Farley’s night security monitor caught a wayward male student climbing out of his girlfriend’s room, swinging in the breeze on a portable ladder.

Life as an ND rector, however, involves more than the excitement of enforcing parietals or dealing with all the mundane details to keep a 250-woman residence hall running smoothly. “The job is a lot like being the pastor of a parish,” the Norfolk native says in a Virginia Tidewater accent that melts words like “four” into “fo-uh” and “house” into “hoose.”

“We’re with the students in good times and bad times,” Etheridge says. “There’s a unique tension to the work. On the one hand, you’re a pastoral presence to the students when they’re in trouble or sick, or if they need comfort when you have to break bad news. On the other hand, if they’ve gotten into trouble over the weekend, you have to call them in for a little chit-chat. But I’d say only 5 percent of being a rector involves discipline.

“Coming into this work fresh from graduate school, you think everything’s gonna be by the book because you know all the theory,” says the nun, who holds a doctorate in pastoral theology and who served years as an elementary and high school teacher. “But, little by little, you realize the job is mostly opening your door. It’s the ministry of hospitality. It’s mostly being there for them.”

Sister Carrine says she has two sure-fire magnets that draw students in through her door: a large bowl filled with an endless supply of M&M’s, and Farley, the little Pekingese she adopted eight years ago when ND Security found the stray wandering campus. “The girls will come in to play with the dog or grab some chocolate, and then if they’ve had a bad day, they may want to sit and chat,” she says. “Or if they’ve broken up with their boyfriend, they’ll take Farley for a walk and fill her ear with it. I’m sure that dog has heard a lot, but she always keeps a confidence.”

The rector gives a brief tour of her parlor, revealing some history and curiosities. The dorm can legitimately claim to be the “Hall of Presidents,” she says. “Monk Malloy lived here as a student, and Father Hesburgh was a Farley rector. That’s his desk over there in the corner. He wrote two books on it.”

Across the way on a wall is a photo of Sister Carrine and the football team running out the stadium tunnel with Lou Holtz. The picture has been known to cause a double take or two. “I put my face on one of the players, and when I picked it up at the store, the lady said, ‘Ohhhh, you have a boy at Notre Dame!’ I just said, ‘Uh hunh.’ ‘Well, he’s the spittin image of you,’ she said. And I just said, ‘Yeah, we’re very close.’ She never caught on.”

Abruptly the whine of a siren from somewhere on campus seeps through Etheridge’s window, interrupting her train of thought. She cocks her head toward the sound. “Now that’s something a rector can identify with. . . . ‘Uh oh. Is it I, Lord?’”

The saddest and yet perhaps most inspirational time in her tenure, Etheridge continues, may have been the summer of 1996 when a Farley resident, Patty Kwiat, and her sister perished in the crash of TWA Flight 800, which exploded over Long Island Sound, probably from an electrical malfunction.

The entire hall was affected by that tragedy, the nun recalls. “I spoke at Patty’s funeral. When her body was recovered she was identified by her class ring. We spent a lot of time that whole year nursing Patty’s friends, being with those girls who were so deeply affected by her death.

“A lot of them were off-campus kids, former Farley girls. The hall, you know, is like home base. Even when girls leave, they’ll come back for Mass, to visit or if they get in trouble,” she says with a chuckle. “Oh yes, if they have to go to Res Life sometimes they’ll come back and ask if I’ll go with ’em. And, of course, I always do.”

Etheridge is adamant that the lessons of hall life are as important as those taught in the classroom. “The whole dorm is a learning atmosphere,” she says. “This isn’t just some Christian boarding house. We’re learning how to deal with conflict and pressures and balancing things. This is a community. It’s not just a place where you get your keys and condoms as they do in some public schools.”

Sometimes the best lessons come from less than ideal circumstances. While Farley’s rector says she’s pleased that the University is building new dorms to ease overcrowding, ironically she believes cramped quarters have some merit.

“Like they say ‘it’s an ill wind that doesn’t blow somebody good.’ Talk about the great polisher! It takes these diamonds-in-the-rough, and they rub each other the wrong way and, in the process, they come out really nice people. I call it the ‘First Year De-Princessing Process.’ We should give students six credits for getting through freshman year; it’s a crash course in Life 101.”

Over her years in the dorm, the rector has noticed some noteworthy changes in students. Her tenure coincides with the rise of the Internet, so it’s no surprise that she views technology as a significant driver of student change, some good, some “not so.” A story she tells related to dorm overcrowding illustrates the positive side, the bonding from improved communication.

Four freshmen had been assigned to a less-than-desirable basement quad at the beginning of the school year, Etheridge recalls. However, when it became apparent that more suitable rooms would be available, the girls said, “Oh, no! We don’t want to break up and move. We love each other.” To which the rector replied, “But you haven’t even met each other.” And they said, “Oh we know each other from Facebook!”

On the negative side, Sister Carrine says the Internet and cell phones have slowed freshman adjustment to college life. “It used to be that parents would come see their children on football weekends or they would call once or twice a week and send some snail mail now and then,” she notes. “But today with cell phones, or ‘the longest umbilical cord in the world,’ as Father Poorman calls them, it’s easier for parents to not let go, and that’s not good for their children.”

In the rector’s opinion, the ever-quickening pace of student life is another negative change. Etheridge says she sees many more students today suffering from anxiety disorders and depression. “Notre Dame students are getting brighter and brighter, but they’re also much more stressed these days.”

Amid all that change, however, one of the constants both current and former students feel is a tight bond to their hall, she says. “Many times we’ll have men, former Farley guys, the good ol’ boys, come back to the hall and ask to see their old room. But now an interesting thing is happening. The ‘good ol’ boys club’ is becoming the ‘good ol’ girls club.’ Every year we have more and more young women whose mothers lived in Farley. In fact, we have three right now.”

The rector says she is constantly inspired by Farley women. “I had one student who was working two jobs on campus and sending money home, and now she’s graduated with a great job. There are a lot of success stories on this campus. That’s what makes it all worthwhile.

“When I first came here I thought this Notre Dame spirit business might be just a lot of hype. But over and over I’ve seen firsthand what this place can do for a young person. It’s not just what they study; it’s the kind of people they rub shoulders with.