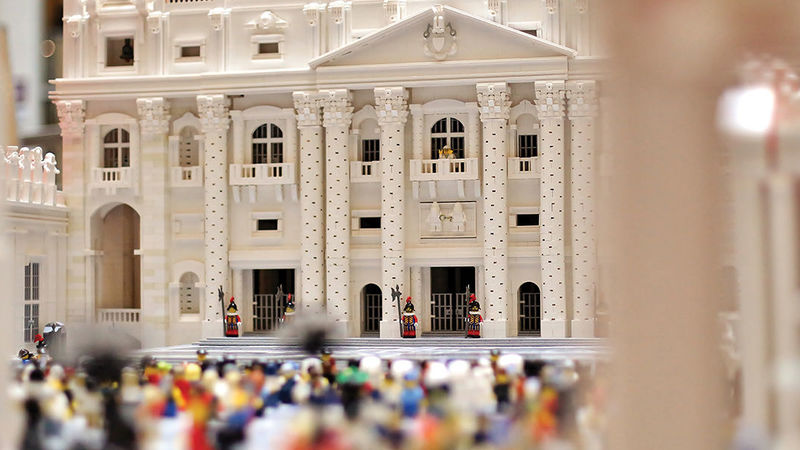 As Father Bob Simon ’96M.A. remembers it, around age 5 he began to discern two distinct but equally contemplative callings: the priesthood and playing with Legos. They stuck.

When Pope Paul VI died in August 1978, followed by the elevation and sudden death of John Paul I, then the election of John Paul II, all within about two months, the 13-year-old Simon followed the tectonic Church news. He’s of Polish ancestry, so when Karol Wojtyla, the former archbishop of Krakow, became Pope John Paul II, the event carried particular significance. To commemorate that momentous period, Simon built his first Lego Vatican.

In his memory, it was a structure of soaring grandeur. A model made of toy blocks, maybe, but one Michelangelo himself might bless with a kiss of his fingertips. “My sister showed me pictures a few years ago,” Simon confesses with a laugh on the phone from the Moscow, Pennsylvania, parish where he serves as pastor. “It wasn’t as epic as I remembered it.”

What Simon achieved as an adult working in the same medium — including some bricks left over from his childhood — far surpassed his first draft. His Michaelangelic masterpiece incorporates an estimated 500,000 bricks, stands about 4 1/2 feet high and encompasses almost 100 square feet. Little Lego figures representing Simon’s “here comes everybody” vision for the Church populate his miniature St. Peter’s Square, including an Elvis impersonator, a tourist in an “I’m With Stupid” T-shirt and nuns posing with selfie sticks and eating ice cream cones. There’s even a robber, whose presence has arched a few eyebrows in Simon’s direction. “Yeah,” he says in response, “because everybody’s welcome.”

The dream of a project like this might have lingered in his mind, but Simon had more or less left Lego behind since his youth. Then he went to BrickFair, an annual exposition in Virginia for Lego aficionados where builders display their intricate creations. “I went just to check it out,” he says, attending twice before an idea took form and led him to register as an exhibitor for the August 2015 convention.

Simon started with the St. Peter’s Basilica façade. A close-up on the cover of a Knights of Columbus book about the Roman church’s mid-1980s restoration provided the vision he needed, if not the calculations.

“I was really worried about scale and all that stuff,” he says. “I talked to two young math teachers in my parish and I said, ‘Could you help? Could you have some conversations with me about scale?’ They were looking at me like, ‘What in the world is your problem?’”

There were only so many arches and round bricks in the Lego inventory, Simon realized, limiting his options but granting the freedom to experiment in an effort to match the real thing. His basilica dome includes pieces most often used as skeleton arms or as wheel wells on a Lego car. The round windows encircling the dome? Those are normally life preservers or toilet seats. Simon took creative delight in a “spirit of almost alchemy,” refashioning familiar materials into something new. Using his childhood stash, gifts from parishioners and economizing bulk brick purchases, he figures the project cost between $5,000 and $6,000 — about one-tenth of what a magazine estimated in its back-of-the-envelope calculation.

Working in scraps of time — late evenings and idle weekend hours — he spent about two months late in 2014 constructing the façade, then set the project aside during the busy Christmas season. Returning to it after the holidays, Simon laid out the nave and the apses and awakened to the daunting magnitude of what he’d assigned himself. “I thought, ‘What in the world am I thinking?’” he says. “I could actually lay inside of it.”

Metaphorically, that’s what he did for a while — just lay there in creative paralysis. For a month he would climb up to the empty third-floor room in the rectory that made a perfect Lego studio and . . . do nothing. “I would just sit there and stare at it.” Stuck.

He had a deadline, remember, that August expo. Simon realized that, if he wanted to make it, he needed to thaw the mental freeze that had settled over him. Only deliberate forward progress could achieve that.

“You’ve just got to put one brick on another brick,” he told himself, discovering a universal lesson that he has since dispensed to parishioners who have come to him in need of a nudge to free themselves from life’s little ruts.

One night the project took on an even greater spiritual dimension. Simon got word that a parishioner had died, and he visited the family’s home to console the wife and daughter of the deceased man. Returning to the rectory not long before midnight, Simon knew he wouldn’t be able to sleep right away, so he decided to wind down brick by brick. Instead of turning on the television, his usual ambient distraction, Simon prayed for the man and his family as he worked. “Then I realized the bricks in my hand were very similar to having a rosary in your hand,” he says.

All the threads of Simon’s inspiration — the prosaic and the transcendent, the playful and the prayerful — braided into a unified whole. He pondered the intention of Michelangelo’s dome on St. Peter’s, intuiting in its soaring reach a “connection between heaven and Earth and between Peter and the living Pope.” And he contemplated the purpose of Bernini’s piazza leading to the basilica, with its arcing colonnades open like a mother’s arms “embracing all of humanity.”

Simon has felt humanity’s embrace in return since his model’s debut at BrickFair. Unbeknownst to him, a friend contacted The Franklin Institute, a prestigious science museum in Philadelphia. The institute had a popular Lego exhibit called The Art of the Brick and also happened to be preparing a Vatican-related show to coincide with Pope Francis’ visit to the United States. A Lego St. Peter’s inspired just the kind of instantaneous interest from the museum that you’d imagine under those coincidental circumstances and it spent six months on display at the Franklin.

The model moved in March from an exhibit in Warsaw, Poland, to another show in the city of Lublin.

Simon met a fellow builder in Poland who, as an 11-year-old boy, had created a World Trade Center model after visiting New York City months before the September 11 attacks. A modest effort, eclipsed in the shadow of what he would accomplish as an adult — like Simon’s original St. Peter’s. Almost two decades later, the man built a 20-foot-high World Trade Center replica. They scrolled through smartphone photos of their first drafts in kinship.

Alongside his Lego Vatican at the Lublin exhibit, Simon decided to display the pictures of his childhood original. Kids who see his sprawling, intricate St. Peter’s often blurt out that they could never do that. The old pictures, Simon figured, would help validate his reassurance and affirm the truth of the secret he divulges about how he did it, and how they could, too: “One brick at a time.”