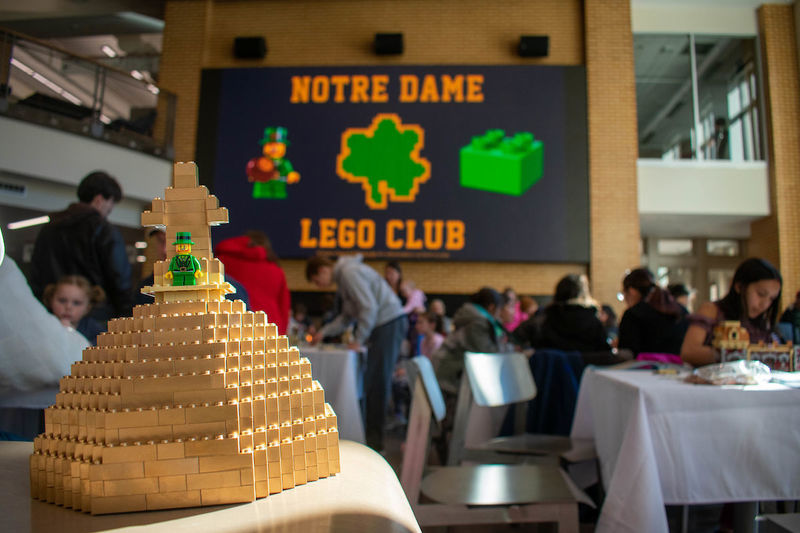 The roller coaster is nearly complete, except for a section of missing tracks that would certainly lead passengers on a path to disaster.

Piece by plastic piece, Caleb Bui, 8, and his father, Peter, are crafting The Hook, a ride destined for a place in the Pirate’s Cove section of Lego KingDOME, a miniature tabletop theme park created in one day entirely of Lego pieces.

The pair are following an illustrated Lego construction manual. “I just like to build,” Caleb says. Sometimes he crafts Lego projects and uses a cell phone to create stop-action videos of his progress.

“He says he wants to be some kind of engineer,” says his father, Peter Bui ’06, ’10M.S., ’12Ph.D., a Notre Dame associate teaching professor of computer science and engineering.

The father-son team are among dozens of area residents who turn out on a cold, sunny Saturday in late February for a Lego build event in the Duncan Student Center organized by two student clubs, the Lego Club of Notre Dame and the Themed Entertainment Association at Notre Dame. It is the second annual Lego build event the clubs have co-hosted.

The project is ambitious: Constructing a complete Lego miniature amusement park in 13 hours that is a mix of Notre Dame, Disneyland, Harry Potter and a classic theme park. It includes a Golden Dome (of course) topped with a green Lego leprechaun, a fairy tale castle, a wizarding world, a Ferris wheel and more.

The Lego line of plastic construction toys was invented in 1949 in Denmark. The early sets were composed primarily of plastic bricks that could be interlocked to construct an array of buildings, vehicles and figures. In more recent decades, elaborate Lego kits have become available to allow for construction of realistic-looking spacecraft, famous buildings and projects based on popular films. Adding to the allure, there are eight Legoland amusement parks around the world, including one in California and one in Florida.

“I like that you can take pieces made for one thing and build something completely different,” says Notre Dame senior Colin Whelpley, who is snapping together plastic pieces to create a pen for Lego dinosaur figures destined for the Fossil Falls section of the mini theme park.

A mechanical engineering major, Whelpley founded the campus Lego club three years ago because he wanted to share his Lego fascination with other students. “I’ve been using Legos since I was 6,” he says.

The Lego Club has about 20 regular members drawn from Notre Dame, Saint Mary’s and Holy Cross.

The Themed Entertainment Association draws students who aspire to work for Disney and/or design future theme parks and rides. The annual Lego build is open to campus and community residents, and this year it draws a large crowd of area children and their parents, as well as undergraduates.

Notre Dame seniors Mary K. Wentzel, a civil engineering major, and Andy Slavin, a computer science major, aren’t members of either club but they turn out to help with the Lego KingDOME project. They chat as they piece together a section of the fairyland castle. Both are Lego enthusiasts.

As a child, “I would build little Lego horse barns,” Wentzel says, snapping together pieces that will form the castle walls.

“I like that you see the results of your work,” Slavin says.

Abageal Liptrap, 5, is joining together sections of gray plastic tracks for the Notre Dame Central Railroad section of the tabletop theme park. She places little Lego people in the passenger car of the Lego train.

“We built up our collection of Legos online fast by buying by the pound,” says Heather Liptrap, Abageal’s mother. “We're getting a 17-pound box next week.”

Some of today’s children and young adults got interested in Legos by joining Lego Robotics groups, which build Lego objects that are computer-programmed to move and complete simple tasks.

“Legos were a big part of my childhood,” says Matthew Herrmann, a Notre Dame sophomore and the Lego Club’s current president. “It’s an outlet for creativity.” He’s an architecture major who has always liked building things.

By 11 p.m., the Lego theme park will be complete. Then it will be immediately deconstructed, vanishing until the next Lego build event.