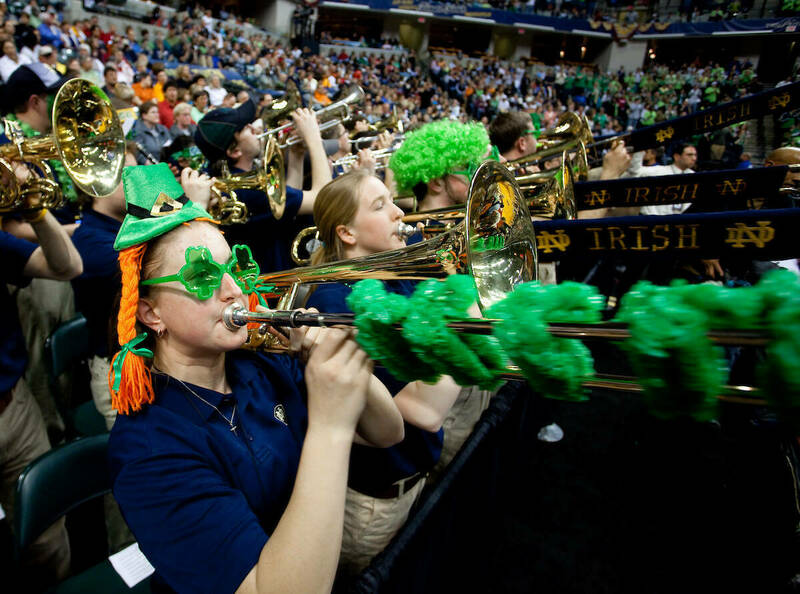 The tune remains the same, but the “Victory March” now recognizes Notre Dame’s sons and daughters. Photo by Matt Cashore ’94

Maryann Moorman Prezzano ’78 was a Notre Dame junior living in Breen-Phillips Hall in 1976 when some male undergraduates gathered outside to serenade the B-P women with a vocal rendition of the “Notre Dame Victory March.”

She appreciated the sentiment, but it got her thinking. This was in the early years of Notre Dame coeducation.

She penned a letter to the editor of The Observer, the campus newspaper.

“Isn’t it about time that they noticed that we’re not all ‘sons,’ and change the words? For two years now, I’ve sung our fight song, at the top of my lungs on many occasions, ending it with as ‘our loyal sons and daughters march on to victory.’ (Hammerstein could have done better!),” she wrote in the letter published September 28, 1976.

“So, can’t you please join with us and help to improve our fight song? Granted, it’s the football players who are ‘marching on to victory’ but shall we make up a different song for women’s varsity and intramural sports? Is it too much to rewrite a simple but very traditional fight song and admit that women are here to stay, or would this be the straw that broke the alumnus’ back?” —Maryann Moorman

In commemoration of the 50th anniversary of the enrollment of women undergraduates, Notre Dame on Thursday June 2 announced a slight — but significant — change to the famous fight song in order to honor both the “sons and daughters” of the University.

The second verse, which is in the public domain, previously read:

Wake up the echoes cheering her name.

Send a volley cheer on high.

Shake down the thunder from the sky.

What though the odds be great or small.

Old Notre Dame will win over all.

While her loyal sons are marching

The University officially changed the last line to:

While her loyal sons and daughters

March on to victory.

More than a century after its debut, the “Notre Dame Victory March” has been fine-tuned to accurately reflect the demographics of the contemporary student body.

The first public performance of the newly arranged song happened June 2 as part of a daylong celebration to mark this year’s 50th anniversary of coeducation. Alumni on campus for the reunion joined in singing the revised song during a dinner gathering.

Author Murray Sperber, in his book, Shake Down the Thunder: The Creation of Notre Dame Football, called the Victory March “one of the nation’s four best known songs. (The others are ‘The Star-Spangled Banner,’ ‘God Bless America’ and ‘White Christmas.’)”

According to campus lore, the song’s public debut occurred in 1908 when Michael played it on the organ of the Second Congregational Church in the Shea brothers’ hometown of Holyoke, Massachusetts.

The “Notre Dame Victory March” made its campus debut on December 1, 1908 during an event in Washington Hall to honor University President Rev. John W. Cavanaugh, C.S.C.

“New Notre Dame Song Making Hit, Shea Production Sung First Time at President’s Exercises,” a South Bend Tribune headline announced the next day. It was sung by the Notre Dame Glee Club, accompanied by the University orchestra. “The song made a decided hit in the hall and at dinner, where it was also given,” the newspaper reported.

“The song will be published before Christmas by a Chicago music house. Already there is a large demand for copies among students and among outsiders who have heard the march,” the Tribune reported.

The lyrics have changed some over the years. A June 1921 edition of Scholastic Magazine mentioned the song in a news article related to Notre Dame’s drive to establish a $2 million endowment. At the time, the wording was slightly different and lacked the “wake up the echoes” line:

Send down the echoes cheering her name;

Send a volleyed cheer on high,

Shake down the thunder from the sky.

What though the odds be great or small,

Old Notre Dame shall win over all.

When her loyal sons are marching

The Shea brothers credited much of the success of the march to 1923 graduate Joseph Casasanta, University band director from 1923 to 1942, who in 1928 arranged the tune as it is known today. (Casasanta went on to compose the alma mater, “Notre Dame, Our Mother,” and several other ND football songs including “Hike, Notre Dame.”)

Prezzano, who penned that letter to the editor so long ago suggesting a wording change, was thrilled to hear the news. She’s always sung it as “sons and daughters,” as have many of her longtime female friends from college days.

“That’s fantastic,” Prezzano said in a telephone interview. “I’m really happy and my girlfriends will be so happy too.”