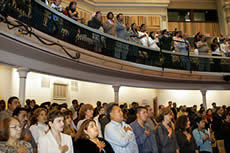 Thousands of foreign nationals become United States citizens each day in settings as surprising as Baghdad and Disneyland and as mundane as your local federal courthouse, but never before it seems in the land of Sorin and Rockne. Despite Notre Dame’s historic (and romantic) ties to what executive vice president and naturalized American John Affleck-Graves calls “the iconic figure of the immigrant,” no naturalization ceremony had taken place on campus until September 12, 2008.

The time and place couldn’t have been better for Vittorio Hösle.

Less than an hour before he raised his right hand and took the oath of allegiance in the auditorium of Washington Hall alongside 194 other Americans-in-the-making, Hösle, Notre Dame’s Kimball chair of arts and letters, still didn’t know whether it would happen.

There had been application forms, fingerprinting, a host of procedural questions, months of waiting and an invitation to be sworn in last spring that never came. With days to spare, Hösle learned of the next local ceremony, which happened to be taking place at the theater built by Notre Dame’s immigrant founder, and pressed his case.

In the end, it came down to the proverbial lost file. While officials in the Chicago office of the U.S. Citizenship and Immigration Services (USCIS) dropped everything else to conduct a search, Hösle dashed across the quads from his Flanner Hall office. The thumbs-up came 15 minutes before the ad hoc court opened.

For Hösle, a philosopher of international reputation born to a German father and an Italian mother, the personal attention he received illustrates something admirable about Americans. “They are willing to make an extra effort” when there is a reason, he said. “This is a mentality that I like very much, which in Germany is very difficult to find.”

The masses huddled inside Washington Hall as Hösle took his seat hailed from five continents and 50 countries, from Bangladesh and Bulgaria to Venezuela and Vietnam. The largest group came from Mexico, as attested by the prolonged and joyful applause that erupted when that country’s name was mentioned in the roll call of nationalities — a powerful moment during a ceremony co-sponsored by Notre Dame’s Institute for Latino Studies.

Undoubtedly each of these immigrants came — and ultimately chose citizenship — for different reasons. Umesh Garg left India in 1974 to study for his doctorate at Stony Brook and attained U.S. resident status shortly after joining Notre Dame’s physics faculty in 1982. He found himself humbled by the woman sitting next to him. “This lady came from Darfur, and I cannot compare my experience of becoming an American to hers,” he said.

Their emotions may have differed, but Garg shared in the pervasive happiness and pride with which all took the oath and sang renditions of “The Star-Spangled Banner” and “God Bless America” led by ND junior Joshua Diaz. Like Hösle, Garg has two children who were born in South Bend, “Americans in every sense of the word.” His Indian-born wife, Anita, became a citizen nearly a decade ago, and he acknowledges laziness on his path to citizenship.

“In many ways, I had already become very American. I live here. I yell and scream as much at the Congress and everything. The problem was that I could not vote, so if I decided to ‘throw the bums out,’ I had no way to do it,” Garg explained.

The door opened recently for both of these Notre Dame professors when the governments of Germany and India, like many others in recent years, relaxed restrictions barring dual citizenship. Garg said his colleagues assumed he already was a U.S. citizen. “Everybody asked me the same question: Why now? And I said, ‘Well, I want to vote.’”

Hösle reported that the right to vote — and angst over the policies of the Bush administration — was the leading motivation for those he spoke with among the 12 Notre Dame faculty, students and staffers who were naturalized that day in Washington Hall.

“I think you have a moral duty to take part at least on an elementary level in the politics of a country,” said Hösle, author of the 1,000-page philosophical tour de force, Morals and Politics. “I have a level of authority with the students if I can address them as ‘my fellow Americans’ and they cannot simply say, ‘Ah, this is a European who doesn’t understand our country.”

“What you think this nation should do matters in a new way now,” Chief Judge Robert L. Miller Jr. of the U.S. District Court of the Northern District of Indiana affirmed in his congratulatory remarks. “We need your help in the continuing work of maintaining our freedoms, our rights and our democracy.”

Outside, volunteers waited in the rain at voter registration tables to make sure these Americans by choice had at least one more opportunity to beat Indiana’s deadline for the 2008 elections.

USCIS Acting Director Jonathan “Jock” Scharfen ’86J.D. encouraged witnesses at the ceremony to ask their new compatriots why they had chosen to become Americans and what U.S. citizenship meant to them.

Beyond voting, which as an Indian expatriate he hadn’t been able to do for much of his adult life, Garg says his years at Notre Dame and the shock of the September 11 attacks gave him a sense of belonging. “I fully expected after that I would be ‘randomly’ searched every time I traveled. After the first month that hasn’t happened. And that’s the beauty of America. You can be different, and it doesn’t bother anybody.”

Natalia Baeza grew up in Colombia and was transplanted to Alabama at age 15 when her mother married an American. A doctoral candidate in philosophy, Baeza was eligible to apply for citizenship in 2005. She was troubled by the war in Iraq, however, and says she needed time to mull the implications of U.S. citizenship. “One funny thing was, when talking about politics, starting to talk about what we’re doing here and there.”

“America is better today because of your citizenship,” she’d heard Scharfen declare from the podium in Washington Hall as he unveiled a poster featuring Knute Rockne, the first of a citizenship services series spotlighting “prominent foreign-born Americans.” But Baeza had already absorbed the message.

“I realized that becoming an American citizen doesn’t mean agreeing with everything that is happening right now, but means becoming part of this experiment that is still open to criticism and self-revision, and it’s the openness that means a lot to me.”

Alfonso Aguilar ’91, chief of USCIS’s Office of Citizenship, said civic education has regained prominence in the naturalization process since the old, notorious Immigration and Naturalization Service was reorganized, renamed and moved into the nascent Department of Homeland Security in 2003. The Puerto Rican son of immigrants from Italy and Costa Rica, Aguilar embodies yet another connection between Notre Dame and the U.S. immigration story.

When read from the stage that fresh fall morning at Washington Hall, that story began with a very foreign flock of French missionaries in the gritty American heartland and reached its symbolic, Jazz-Age climax with an enterprising Norwegian coach and his “Fighting Irish” footballers. In the school’s third century, Hösle, Garg and Baeza take delight in having added their names to that honored list.