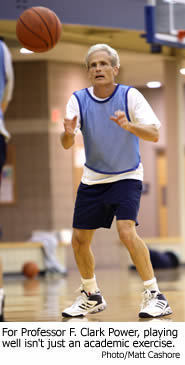 If you’re a red-faced hockey dad in Massachusetts, a high-strung cheerleading mom in Texas or some other species of overzealous sports parent, be warned. A Notre Dame educator is deploying a small army of coaches to change the tone of kids’ sports—starting with Catholic youth leagues—and they agree that you are a big part of the problem.

A group of about 30 coaches and youth ministers from South Bend and places as far away as Ireland gathered in June at Notre Dame for the first Sports as Ministry workshop, just as the campus began to swell with its annual inflow of sports campers.

The workshop is an outgrowth of the work of Professor F. Clark Power and his colleagues based at the University’s Center for Ethical Education (CEE). It represents the first step toward a comprehensive program for Catholic youth sports that Power says puts kids and their developmental needs first. Participants reflected on coaching philosophy and talked about some of the problems they have encountered in youth sports. Then they were trained to partner with parents and athletic boards to address these problems.

For Power, a specialist in character development who teaches in the University’s psychology and liberal studies programs, the focus is not on winning or creating the next generation of star athletes. Instead, he says, the workshop stresses that sports should be an opportunity for kids to have fun, develop a sense of fair play and respect, and build the decision-making skills they will need to become healthy adults.

CEE research, reported in the summer issue of this magazine, surveyed parents’ and athletes’ bad behavior and found plenty of cause for the high levels of sports burn-out that other studies have discovered among kids 13 and under. These behaviors were especially egregious in Catholic programs.

Power finds this inexcusable. “Catholic programs are not making a difference. That alone should be motivating. If you’re not getting your religious values across, why do it? You’re actually giving the Church a bad name.”

The Sports as Ministry program, which Power developed in conjunction with Greg Dobie Moser, director of the Diocese of Cleveland’s youth and young adult ministries, takes its cues from scripture and such Catholic sources as Pope John Paul II, golfer Jack Nicklaus, the Catechism and the theologian Hugo Rahner. “To play,” Rahner once wrote, “is to yield oneself to a kind of magic . . . to enter into a world where different laws apply.”

The win-at-all-costs mentality so often found in youth sports snuffs the value Rahner found in sports. Power says that children’s natural inclinations to play and compete have given way to adults’ interests in getting their children ahead in life. The CEE research noted that neither boys nor girls put winning among the top seven reasons they want to play sports. According to the workshop materials, when coaches focus on helping players set goals, build relationships and take ownership of the game, “winning will take care of itself.”

As a former youth coach, Power knows well that selling coaches on character development alone is a turn-off. He remembers how men’s soccer coach Bobby Clark, one of several Notre Dame coaches to help Power craft the programs, admonished him to “talk about winning.”

No problem. Although “Sports as Ministry” will target younger kids, Power can point to famously successful programs that seem to share his philosophy at the high school and college levels. There are stellar examples in Notre Dame’s proud tradition, of course. But note also that Saint John’s University in Collegeville, Minnesota, has the highest winning percentage of any Division III football school in history, much of which has come under Coach John Gagliardi’s “Winning-with-no” rules, which include “No hazing tolerated”; “No trash talk tolerated”; “No rules, except the Golden Rule.”

At the Gilman School in Baltimore, coaches won’t allow players to let any other Gilman boy eat lunch alone. They remind players at every practice that the coaches’ job is to love them. The high school went undefeated in 2005, won its second consecutive state football championship in its division and finished 12th in the USA TODAY national poll.

At the youth level, Power says the emphasis should be on equal playing time, a concept that parents of some exceptional athletes view as a policy of enforced mediocrity. “But I think there’s a lot of hypocrisy here,” he says. “A lot of people will say sport builds character. Then why wouldn’t you give kids equal time to get good at this?"