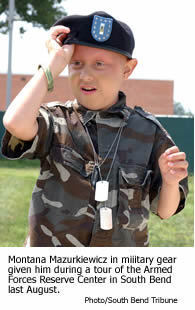 Fans watching the Notre Dame football game at Washington last September may have been struck by Coach Charlie Weis’s daring in calling a pass play with the team at its own 1-yard-line to start its first possession.

Daring had nothing to do with it.

Weis was fulfilling a promise he’d made a few days earlier to a 10-year-old boy named Montana Mazurkiewicz. Fighting an inoperable brain tumor, the boy had been told earlier in the week by doctors that there was nothing more they could do for him. The avid Irish football fan, named for Joe Montana, asked if a player could visit him. Weis came to the family’s home in Mishawaka instead.

According to various news accounts, the boy was at that point paralyzed from the waist down and in constant pain. When his mother suggested Montana toss her the football Weis had brought with him, he was too weak to comply, so Weis assisted with the arm movement.

The pair talked football, and Weis told the boy about his 10-year-old daughter, Hannah, who has global development delay, a rare disorder said to be similar to autism. Before leaving, Weis agreed to let Montana call Notre Dame’s first play of the game at Washington. He chose “pass right.”

Conventional football wisdom called for a run in that position to advance the ball away from the goal line and reduce the chances of a safety. But Weis had told quarterback Brady Quinn about the ailing boy’s play call before the game. As the coach would later tell reporters, Quinn asked, “What are we going to do? I said, ‘We have no choice. We’re throwing it to the right.’”

Quinn completed a short pass to the right to tight end Anthony Fasano, who leapt over a defender on his way to a 13-yard gain and a first down. Notre Dame went on to win 36-17.

But Montana Mazurkiewicz didn’t see the play or any of the game. He had died the day before.