Temperatures in the 30s greeted guests and graduates May 15 at the Class of 2016 commencement. And protesters gathered near the University’s main gate to give Laetare medalist Vice President Joe Biden a chilly reception, arguing that he should not be honored because of his support for abortion rights.

At the ceremony inside Notre Dame Stadium, though, a warm camaraderie prevailed as Biden and fellow Laetare recipient John Boehner, former Speaker of the House, praised each other’s bipartisan spirit and called on the graduates to renew the character of American politics.

Here are excerpts from their remarks and commencement speaker retired U.S. Army General Martin Dempsey’s address to the Class of 2016: 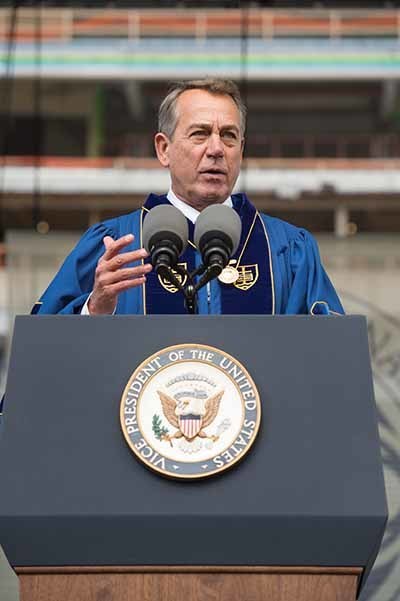 “Politicians these days are constantly being pushed to promise the impossible. . . . Governing, in its essence, is the art of the possible. Governing requires us to look for the common ground where it can be found without compromising our principles. As Speaker, I always drew a distinction between compromise and common ground, because I truly do believe they’re different things. . . . While I’m a Republican and Joe’s a Democrat, the fact is, at first, we’re both Americans.” 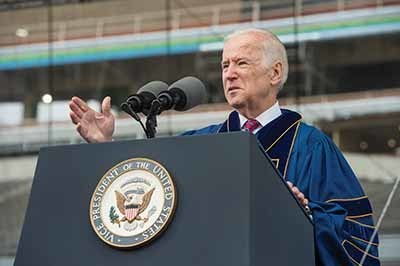 “To the detriment of the nation, in my view, and I think John would agree with me, [politics] has become a blood sport full of invective and ad hominem attacks. . . . I was taught by my family and my faith to look beyond the caricature of a person, to resist the temptation when you disagree to ascribe a negative motive. . . . I’ve read some accounts how John and I are old-school. We used to treat each other with respect, hang out with each other. John and I aren’t old-school. We’re the American school. We’re what you have to restore, where progress only comes when you deal with your opponent with respect, listening as well as talking.” 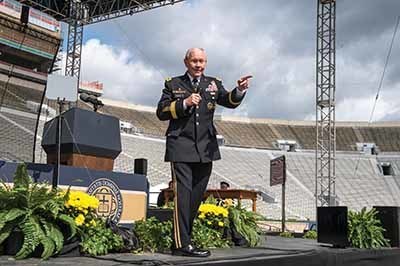 “‘Make it matter’ is a phrase with meaning in each of our lives, regardless of our occupations. So today, I ask you to make tomorrow matter and then the day after that and the day after that. And pretty soon it will be the sum total of your life that has mattered, not any one particular accomplishment.”