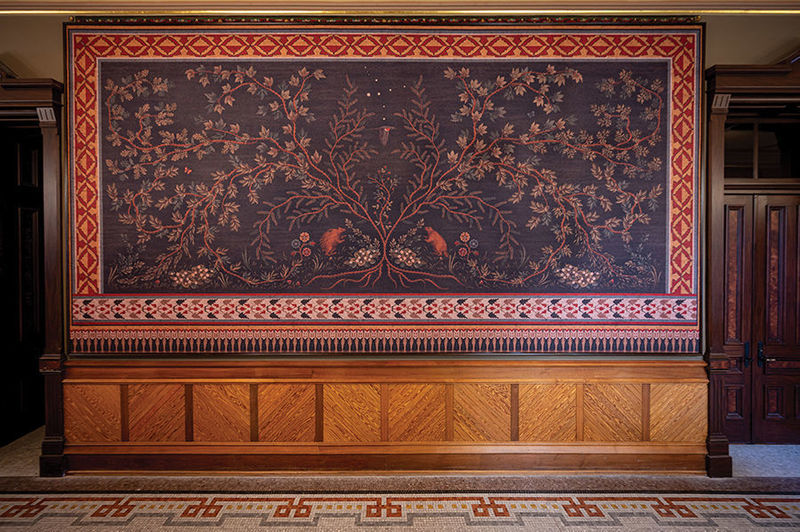 Paintings of Christopher Columbus no longer adorn the central corridor of Notre Dame’s Main Building. The murals, which had incited controversy in recent times, have been covered with nature-themed fabric in rich shades of green, brown, rust and gold.

The coverings, like tapestries in their detail, depict trees, leaves, flowers, birds and other elements of the Midwestern landscape. Their borders reflect natural and geometric motifs of the Pokagon Band of Potawatomi, the tribe whose ancestral homelands include the area where Notre Dame now stands. The artwork, designed by Erik Baden, an artist and interior designer with Conrad Schmitt Studios of New Berlin, Wisconsin, was transferred to a light fabric using a dye sublimation print process and is secured to the walls in wood frames.

Columbus was a national hero in 1881, when Italian artist Luigi Gregori was commissioned by Notre Dame’s unabashedly patriotic patriarch, Father Edward Sorin, CSC, to paint the 12 murals that would celebrate the achievements of the artist’s famous countryman. The murals’ somewhat curious prominence in the second-floor hallway of the Main Building may be best understood — at least historically — for their symbolic braiding of Catholicism, ethnic identity and national pride.

Heralded as the discoverer of a vast new world he claimed for Spain, the explorer was admired at this frontier school founded by French missionaries and home to many other European immigrants. In recent decades, however, the murals have come to represent a darker side of the Columbus legacy and what his arrival on these shores meant for the continent and those who had lived here for thousands of years. Student groups periodically called for them to be removed.

The challenge, then and now, is that Gregori’s artwork, using Notre Dame figures as models, is painted directly onto sturdy walls and has some historical value and institutional significance.

In 1997, when the controversy again erupted, the University offered a compromise by providing visitors with a pamphlet that acknowledged the discrepancy between the sensibilities of Gregori’s time and those of the modern moment. Gregori, the brochure explains, portrayed Columbus “much as a hagiographer might tell the story of a missionary saint.” Since then, many have expressed offense at the artist’s depiction of the native people Columbus encountered — dressed in stereotypical and historically inaccurate attire — as being uncivilized, subservient heathens in need of saving.

Additionally, beyond the decimation of native cultures that followed his “discovery,” more recent biographies of Columbus have documented the explorer’s brutal treatment of Native Americans and his hauling hundreds back to Europe to be sold as chattel in the Seville slave market.

The controversy flared again in 2018, and this time — after years of deliberation — a decision was made. University president Rev. John I. Jenkins, CSC, ’76, ’78M.A. announced in January 2019 that the murals — rather than being removed or painted over — would be covered “by woven material consistent with the décor of the space.” High-resolution images of the murals would be available in another campus location and an exhibit that explains the murals and situates them in the context of University history would be installed.

Then, in an August 2020 letter discussing racism, justice and public discourse, Jenkins announced that the murals were now being covered — a move that will please many and disappoint others.