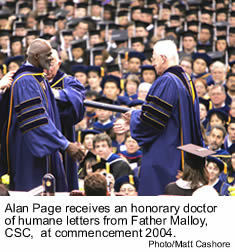 Speaking a day before the 50th anniversary of the Supreme Court’s landmark school desegregation decision in Brown v. Board of Education, Minnesota Supreme Court Justice and former football great Alan C. Page ‘67 told the audience at Notre Dame’s 159th commencement that some things have changed for the better in regard to race issues in this country.

Page, who is African-American, told the capacity crowd in the Joyce Center on May 16 that the disappearance of “Colored Only” signs and other symbols of what he called “state-sponsored apartheid” demonstrated clear progress. But he despaired of studies showing that five decades after Brown, many schools are re-segregating. And nearly four decades after passage of the Voting Rights Act, “far too many African-Americans feel they have no reason to vote.”

Page said he was particularly concerned about the criminal justice system. He cited studies showing that people of color are arrested, charged, and given higher bails, tougher plea bargains, less fair trials and far longer sentences than whites.

“There is something fundamentally wrong when our judicial system —the one branch of government designed to protect individual rights—persistently denies equal justice to communities of color,” he said.

Page became the first African American to sit on the Minnesota Supreme Court when he was elected to the post in 1993. He had previously served as an assistant attorney general for the state and, prior to that, practiced law at a firm in Minneapolis. He attended the University of Minnesota Law School during his years starring in the National Football League and earned his law degree in 1978. He was a three-year starter at defensive end for Notre Dame, a consensus All-American and led the Fighting Irish to the 1966 national championship as a senior.

Page devoted about half of his address to issues of race and the other half to the more traditional commencement theme of encouraging graduates to be of strong character and work to change the world for the better.

“You don’t need to be a Supreme Court justice or even a football hero to make change happen,” he told the assembled students, faculty, administrators and family members and those watching on TV elsewhere on campus and on the Internet. “Everyone here . . . has the ability, the opportunity, and I believe the obligation to make this world a better place. All we have to do is act. And act we must.”

Also speaking at commencement was the recipient of this year’s Laetare Medal from Notre Dame, the oldest and most prestigious honor given to American Catholics. Father J. Bryan Hehir, president and treasurer of Catholic Charities for the Archdiocese of Boston, talked of the priest sex-abuse scandal in the Boston area, which he said had devastated the archdiocese and created a “crisis of trust.” He said he was accepting the award on behalf of all those trying to restore that trust and “as a pledge of commitment to the work which must be accomplished if the social ministry of the church is again to be credible and effective.”

Before his most recent appointment last January, Hehir had served as president and chief executive officer of Catholic Charities USA since 2001. He had been on the faculty of Harvard Divinity School beginning in 1993 and from 1998 to 2001 was the first Catholic priest to lead the school. Prior to Harvard, Hehir worked for two decades in Washington in what was then called the United States Catholic Conference (now the U.S. Conference of Catholic Bishops). A prominent scholar on the theory of just war, he is regarded as the principal architect of the bishops’ influential 1982 pastoral letter on nuclear weapons, which called for reducing the nation’s nuclear arsenal.

Valedictorian Sarah Streicher of Toledo, Ohio, who earned a 3.99 grade-point average as a double major in English and French, spoke of the multitude of activities, interests and causes in which students are involved at Notre Dame. She called on graduates to remain engaged.

“If we were to stop doing so,” she said, “the tensions that once pulled our character so big might slacken, and we might just snap back to something narrow and diminutive.”

Academic degrees were conferred on some 1,850 undergraduates and 600 advanced-degree candidates at this year’s commencement.

Eleven individuals were given honorary degrees, including Page, whose doctor of humane letters represented his second honorary degree from the University following a doctor of laws in 1993.

Also receiving honorary degrees this year were: Judge José A. Cabranes of the U.S. Court of Appeals for the Second Circuit; Sister Anita de Luna, MCDP, assistant professor of religious studies and director of the Center for Women in Church and Society at Our Lady of the Lake University in San Antonio; John L. Hennessy, president of Stanford University since 2000 and a professor of electrical engineering and computer science; Elaine Kim, professor of Asian-American studies at the University of California, Berkeley; business executive Terrence J. McGlinn ‘62, a member of Notre Dame’s Board of Trustees and Board of Fellows; Reverend Jerome Murphy-O’Connor, O.P., Dominican priest and professor at the Ecole Biblique et Archeologique Francaise in Jerusalem; Homer A. Neal, Samuel A. Goudsmit professor of physics at the University of Michigan and former interim president (he was the first African-American to lead the university); James D. Sinegal, founder, president and chief executive officer of Costco Wholesale Corporation; Roxanne Spillett, president of Boys & Girls Clubs of America; and Peter Tannock, vice chancellor of the University of Notre Dame Australia.