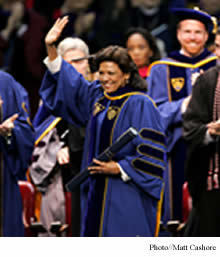 2. Remain open to change and surprise.

3. Make room for God in your life’s routine.

“I have nothing but gratitude and thankfulness to all of you, this class and all the classes that preceded it,” said Monk, who stepped down June 30, 2005.

“Thanks for the memories, and God bless you all,” he concluded to a standing ovation.

Home-run king Hank Aaron. The executive director of the United Nations World Food Program. The actress who plays “Maria” on Sesame Street. The head of Xerox. The president of USC. A brain surgeon who performed the first successful separation of Siamese twins joined at the head. And one of the worlds most prominent cardinals.

They all received honorary doctorates at commencement.

The 16 individuals who received Notre Dame honorary doctorates included, as is the custom, the event’s principal speaker, Vartan Gregorian. Also receiving honorary degrees were two of the University’s leaders, who were leaving office June 30, Monk and Provost Nathan Hatch (the new president of Wake Forest University).

Read the list of honorees and their biographical summaries at www.nd.edu/~ndmag/su2005/docts.html.

said that when he was president of Brown University he used to welcome and bid farewell to students with the same saying: “The number of those who undergo the fatigue of judging for themselves is very small indeed.”

At commencement, the scholar and historian, now president of the philanthropic Carnegie Corporation, urged graduates to put in the hard work—utilizing both faith and reason—to try and understand not only why the world is as it is but “to what end?”

“[K]eep focused on that big picture, on what role you want to play in the great human drama. Remember that you are not mere actualities. You were born as potentialities.”

About 95 percent of the 2,040 undergraduates who enrolled at Notre Dame in the fall of 2001 received a diploma at commencement—one of the top five graduation rates in the nation.

All 50 states were represented in this year’s class.

Some 80 percent of graduates participated in volunteer and service-learning programs in the greater South Bend area, nationwide and around the world.

About 10 percent of seniors are headed off to a year or more of service work in programs such as the Peace Corps, Teach for America, the Jesuit Volunteer Corps, Notre Dame’s Alliance for Catholic Education and Holy Cross Associates.

Santa Ana, California, helped organize marches for immigrant rights in South Bend, co-founded the new group MEChA de ND (Chicano Student Movement of Aztlan), and was among the students who successfully lobbied the University not to renew an athletics sponsorship agreement with local Taco Bell restaurants. Their concern grew out of a national boycott of Taco Bell involving wages paid to migrant farm workers by the company’s supplier of tomatoes. After graduation, the political science major plans to work with the Student Farmworker Alliance and Interfaith Action in Immokalee, Florida.

Granger, Indiana, founded InternNation (www.internnation.com), a free on-line community that allows Notre Dame students participating in internships to connect with each other and share resources while away from home. The marketing major is going to work for the retail and auction website Overstock.com.

Identical twins Brendan and Kevan O’Neill, Lima, Ohio, sons of a double Domer (James A. O’Neill, ’78, ’01MBA), finished neck and neck as pre-med majors with both posting GPAs above 3.9. After graduation they both plan to study at the Columbia University School of Dental and Oral Surgery.

(history), in his dissertation, traced the grassroots origins of the American religious right as the political movement developed in the decades after World War II in one of its most fertile settings: Orange County, California. His study included a look at demographic trends seen in patterns of migrations, especially from Arkansas, Texas and Oklahoma.

(biological sciences) examined the role of a secretory protein in the biology of mammary gland development and tumor progression in breast cancer. Among other findings, she showed that over-expression of the protein in breast cancer cells dramatically increases the propensity of these cells to metastasize to distant organs.

In his valedictory, Enrique Schaerer, the son of immigrants, said people need to look beyond stereotypes and see racial, religious, ethnic and gender differences as a source of strength.

“Tolerance may not be enough. We tolerate pain. At its best, diversity should be . . . transformative, something we celebrate because it opens our minds and stimulates our community.”

the 1990 Nobel laureate who performed the first successful organ transplant 51 years ago.

Murray became interested in tissue and organ transplantation while working as a surgeon at the U.S. Army’s Valley Forge General Hospital in Philadelphia from 1944 to 1947. The hospital had a major plastic surgical center to treat WWII battle casualties. On Dec. 23, 1954, at Boston’s Peter Bent Brigham Hospital, he successfully transplanted a donated kidney from one brother to his genetically identical twin brother. The recipient survived for several years.

Notre Dame’s Laetare Medal is the oldest and most prestigious honor given to American Catholics.