Lives ruined and complicated: such are the fruits of four years at Notre Dame, according to Class of 2007 valedictorian Michael Rossmann.

“You probably didn’t save for years and take out loans with the explicit intention of being ‘ruined,’ but Notre Dame has changed us, has ruined the ‘us’ that came here in the fall of 2003,” the theology and economics major told parents and students at the University’s 162nd Commencement Exercises on May 20. “We cannot see things the same way, and our lives are more complicated because of engaging the world with the resources of faith and reason.”

Notre Dame, the place of paradox, the residential liberal arts college with a heart in faith-filled service and an impressive research resume, was on display throughout a commencement weekend that included a separate degree ceremony for the Graduate School and the presentation to departing Board of Trustees chairman Patrick McCartan of the most prestigious award for an American Catholic, the Laetare Medal.

Rossmann captured the paradoxes with an allusion to “rebellious” students praying the rosary atop the Stepan Center and references to his studies in Uganda, where he learned to speak the Swahili and Luganda languages, completed a program in development studies and was challenged by his host family to speak openly about his Christian faith.

“Michael . . . we could all stand to be ruined as you have been ruined,” said Provost Thomas Burish, wishing Rossmann well as he prepares to enter religious life and study for the priesthood.

“You represent everything that is right about this country: the scholarship, the values, and the excellence,” said the chairman and chief executive officer of General Electric Co., which owns the NBC television network. “I like recruiting Notre Dame students, and I like televising your games.”

Challenging students to live with passion and purpose and to teach others to do the same, Immelt spoke in tones serious and good-humored of his own well-publicized passion for innovation.

“I want all the dads to know that I administer a $6-billion research budget. My next pet project is the ‘Virtual Colonoscopy.’ So dads, I have your interests close to my heart,” he quipped.

Immelt was one of 10 guests to receive honorary doctorates. Other recipients were Lithuanian president Valdas Adamkus; Father P. Raniero Cantalamessa, OFM, a Capuchin priest and preacher of the papal household under popes John Paul II and Benedict XVI; Galilean Archbishop Elias Chacour of the Melkite rite of the Catholic Church; University of Michigan president and biochemist Mary Sue Coleman; Dr. Paul Farmer, the 2006 ND Forum speaker and founder of the international organization Partners in Health; Kenneth Hackett, president of Catholic Relief Services; the Chicago-based sculptor Richard Hunt; Immaculée Ilibagiza, an author and survivor of the 1994 Rwandan genocide; and Robert Kiley ’57, whose career in public service has led to substantial improvements in the transportation systems of Boston, New York and London.

“The fact that you are honoring President Coleman from Michigan tells me a little something about your ability to forgive,” Immelt said in his opening remarks.

Indeed, Coleman’s visit to the home of the Irish was historic because of her role as principal speaker at the first separate commencement exercises of the Graduate School, held May 19 at the Leighton Concert Hall of the DeBartolo Center for the Performing Arts. An eminent researcher and administrator, Coleman noted the significance of the University’s decision to honor its graduate students with their own ceremony, pointing out to them that “as that first class, you are the role models for a University that is telling the world, ‘We take graduate education and research very seriously at Notre Dame.’"

Among other awards, the Graduate School also presented its first Distinguished Alumnus award, honoring globalization expert Saskia Sassen ’74Ph.D., the Ralph Lewis Professor of Sociology at the University of Chicago.

Burish acknowledged degree recipients representing the Graduate School at the Sunday exercises, which included the conferral of degrees to students in the Law School and to master’s candidates in the Mendoza College of Business. 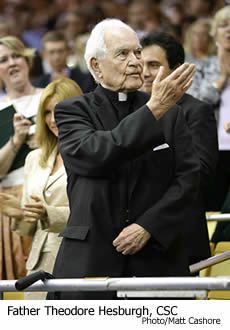 Moments later, after the University president, Father John Jenkins, CSC, conferred degrees to the undergraduates and led parents, professors and administrators in a blessing of the class, Burish greeted Father Theodore Hesburgh, CSC, and announced that the man who “has perhaps devoted more of his life, more intensely, more publicly, to Notre Dame than any other person alive” would turn 90 the following Friday. As Burish’s voice was lost in a standing ovation, and Father Hesburgh’s wave and white hair were obscured by the gathering around him, the Notre Dame Concert Band led thousands of voices in an unscripted singing of “Happy Birthday to You.”