The day after the Pulitzer Prize Board named Carlos Lozada ’93 a finalist for the prize for criticism, he celebrated with his students. 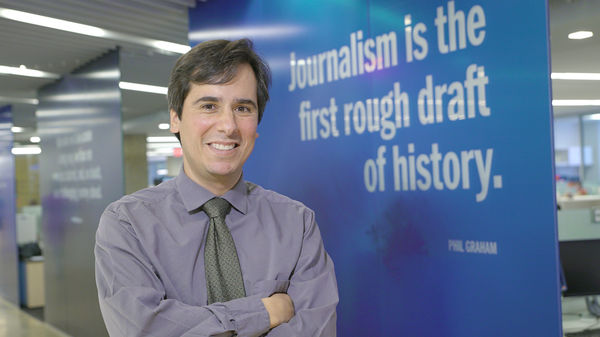 Lozada at the Washington Post offices. Photo by Carrie Gates

Lozada is the Washington Post’s nonfiction book critic, and the Pulitzer board recognized him “for criticism that dug deep into the books that have shaped political discourse — engaging seriously with scholarly works, partisan screeds and popular works of history and biography to produce columns and essays that plumbed the cultural and political genealogy of our current national divide.”

That’s high praise for someone who balances his day job with an adjunct professorship in Notre Dame’s Washington, D.C., program (not to mention time with his wife and three young children). But for the last nine years, Lozada has juggled several different positions at the Post while also teaching American Political Journalism. And at the end of every semester, he hosts current and former students at his home for a pizza party. This semester, the celebration fell on April 17, the day after the Pulitzer announcements.

“It was great,” Lozada says. “It was like my first little celebration was with my students. . . They were thrilled. They wanted to know all about it. And it was exciting for me, too.”

In only his third year as the Post’s book critic, this year’s Pulitzer recognition isn’t the first time Lozada’s keen eye for criticism has garnered national acclaim. In 2016, the National Book Critics Circle honored him for excellence in book reviewing. In his acceptance speech for that award, Lozada explained how he approaches nonfiction criticism.

“Nonfiction books are not just great literature, or big ideas, or feats of writing and reporting,” he said. “They are, overwhelmingly, news.”

So it’s no surprise that Lozada brings his same critical mindset to the classroom, and seeks to instill it in his students.

Lozada pursues his goal of producing more critical news consumers by assigning, well, lots of news stories. The content changes each semester, but students who take the class end up reading dozens of articles that examine what Lozada describes as “the ways in which the political world and the journalistic world intersect in interesting, weird moments.”

For example, each semester students read a 2010 Rolling Stone profile of U.S. Army General Stanley McChrystal, in which McChrystal and his staff were openly critical of the Obama administration. Following the magazine story, McChrystal resigned as commander of U.S. and NATO forces in Afghanistan.

“We read ‘The Runaway General,’ the piece in Rolling Stone magazine, and discuss its merits,” Lozada says. “And then we also evaluate what the Obama White House did in response. Should McChrystal have been fired? Should he not have been fired? That’s a good example of the sort of discussion we have.”

“That class, for instance, is just a way to get people to think about what sort of journalism they value,” Lozada says. “What sort of approach do you want in order to understand this one pivotal event?”

Aside from those two mainstays, though, Lozada says his syllabus changes regularly, sometimes by the week, depending on the news coming out of Washington. Nowadays, though, it can be challenging to prevent the latest political controversy from hijacking class discussion. Lozada says he combats that tendency by making sure discussions remain rooted in the broader themes of the course. 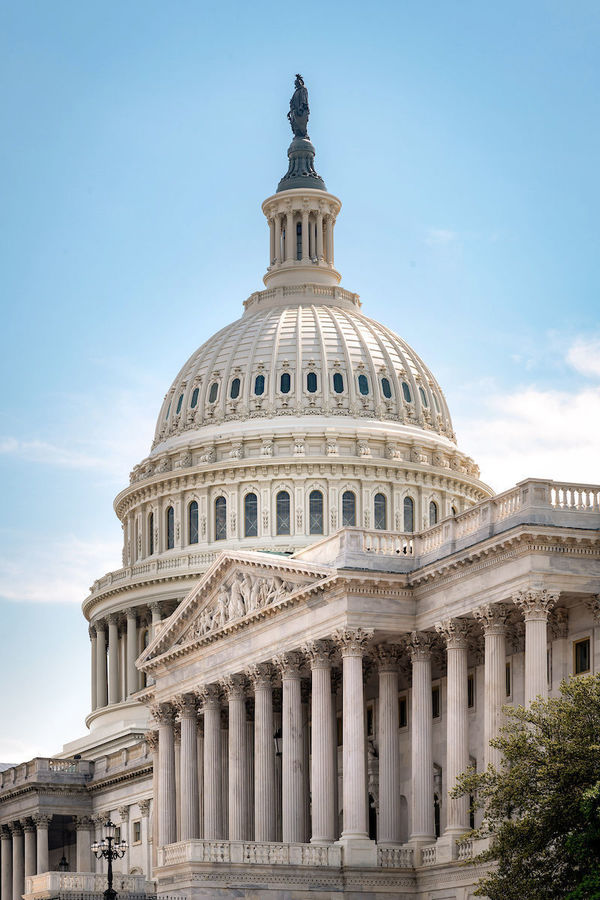 Many students come to Lozada's class straight out of internships on Capitol Hill. Photo by Matt Cashore '94

“I think as long as we are able to keep one eye on the current events, but another eye on history and on principles, then I think it’s fine,” he says. “I think it’s fine to absolutely mix it up with what’s happening today. And I hope that connecting politics and history and journalism to the moment is useful and appealing to the students.”

Guest speakers from the ranks of Lozada’s colleagues at the Washington Post demonstrate the blend of current events and political and journalistic history he hopes to present to students. Marty Baron, the Post’s executive editor, and Bob Woodward, who helped break the Watergate story, both make regular appearances. Robert Costa, a national political reporter and 2008 Notre Dame graduate, has spoken to the class. So has David Fahrenthold, who won a Pulitzer Prize in 2017 for his coverage of Donald Trump’s charitable giving.

Until this year, the class met in a conference room in the Washington Post building, offering students an inside look at the political journalism they studied. This year, Lozada says, the class moved to the University of California Washington Center (UCDC), where Notre Dame students live and take other classes during their semester in D.C.

And though Notre Dame doesn’t offer a journalism major, Lozada has still helped guide several students to careers in journalism.

Alex Caton ’15 took the course in the fall of 2013, the same semester he interned for Illinois Sen. Mark Kirk. Caton says he spent many of his days fielding phone calls from frustrated constituents. Then on Tuesday nights he’d head to the Washington Post building for class with Lozada, and he’d see a newsroom full of reporters and editors actually having fun covering the often-messy politics of the nation’s capital.

For the last year or so, Caton has worked as a freelance journalist based in D.C., where he has written for Politico Magazine, Washington Monthly and the Washington Post’s PostEverything. Along the way, Caton says Lozada has provided invaluable help.

“He’s been directly helpful, and I don’t think that’s unique,” Caton says. “For the students who go through that class and then try to pursue journalism, he makes himself openly available.”

Cassidy McDonald ’17 took the class in fall of 2015, and says she still considers Lozada a mentor. McDonald turned to him when deciding whether or not to accept a Luce scholarship in China after graduation.

“I was initially a little nervous to do the Luce fellowship, but Carlos convinced me that it would be a good choice,” McDonald said in an email. “I trusted him, and he was so right.”

Through the scholarship, McDonald currently works as a journalist in China both for the news division of Chinese tech giant Tencent and as a freelance video and print reporter. In her work, McDonald says she often thinks back to themes from Lozada’s class.

“I read more critically and think more deeply about how reporters got the information they're reporting,” she says. “And as a journalist, I think often about the examples of journalistic failures; I remind myself not to repeat those same mistakes.

“In class, we wrote essays about major cases of journalistic deception, like Rolling Stone's ‘Rape on Campus,’ and This American Life's false story about Apple factories in China. Carlos asked us to ponder the sources of those failures. I think many of those problems stemmed from confirmation bias, news organizations' paternalistic senses of protection or advocacy, and their hesitancy to take responsibility for mistakes. I constantly keep those factors in mind while reporting.”

But Lozada doesn’t just gear the course towards future journalists. He knows that many of his students will instead pursue careers in politics, public policy or the private sector, much like he initially thought he would. Lozada is originally from Lima, Peru, and studied economics and political science at Notre Dame. After earning a graduate degree in public policy from Princeton, he took a job at the Federal Reserve.

Not until his mid-20s did Lozada turn his interest in writing into a journalism career. He spent five years at Foreign Policy magazine, eventually working his way up to managing editor, before accepting a yearlong business journalism fellowship at Columbia University. At Columbia, he learned about the job opening as economics editor at the Washington Post, a role he began in June 2005.

Since then, he has held a variety of roles at the Post, including national security editor, five years as editor of the Post’s weekend opinion section and now as nonfiction book critic. In 2009, he added professor to his list of roles when he took over American Political Journalism from former Post colleague and fellow Notre Dame alumnus Dan LeDuc ’83.

In his time teaching the class, Lozada says he has enjoyed learning alongside his students and forming a community of class alumni, many of whom stay in touch and show up at the end of semester pizza party. And ultimately, Lozada says he hopes his students find the world of American political journalism as exciting as he does.

“I hope they get excited about politics and journalism,” he says. “It’s so easy to get down on all of that these days, with the fake news debates and political polarization. But I fundamentally think that the two worlds they’re exploring, politics and journalism, are incredibly exciting. It’s just riveting to observe it and to be part of it. And so I hope that they capture some of that flavor.”

“I hope it’s cool for them,” Lozada says. “It’s definitely cool for me.”

For more on Lozada's work at the Washington Post, see the College of Arts and Letters' video on his career at this link.