Don’t get me wrong: I am a ride-or-die psychology major.

I’ve loved psychology since the days when the major’s intro class was the only thing getting me up on Friday mornings as a second-semester. I worship Freud (of course), I have classic psych-major stories of using stuffed animals to perform social experiments – truly, I eat, sleep and breathe the stuff.

But in the nature of going against my own, I think the coolest classes at Notre Dame might be those taught in the Department of American Studies.

In a University-wide “Cool Classes” series, I suppose it’s important to highlight all disciplines, from PLS to business analytics to chemical engineering. If it were up to me, though, I’d happily talk about AMST classes each and every month.

This month, I got my wish with AMST 30142, better known as Latino Muralism in Chicago. A new offering this semester from associate professor and 10-year department veteran Jason Ruiz, this course offers a new space in the American Studies curriculum for criticism and digital archiving of an art form that’s available to quite literally anyone: public muralism. 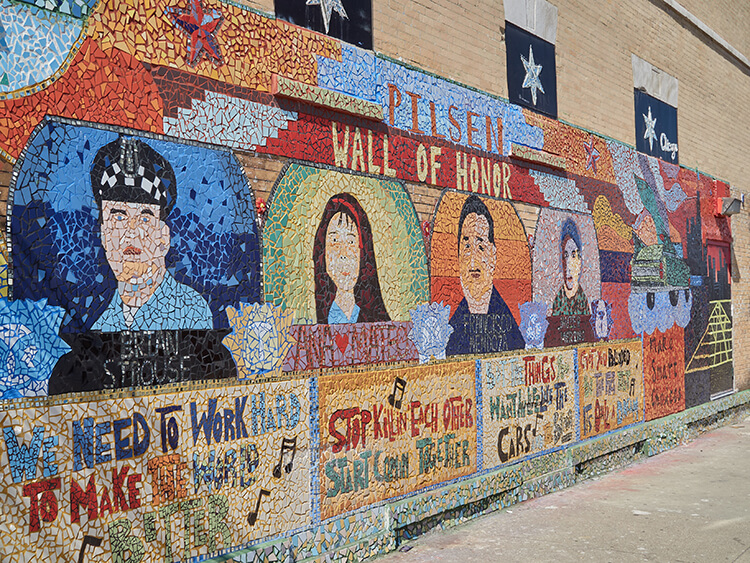 One major character in the development of this class is the Pilsen neighborhood, a lower west side community that houses a large swath of Chicago’s Latino population.

The neighborhood was once a haven for working-class German, Italian, Polish and Czech immigrants, whose architectural influences still pepper the area today. Infrastructure changes in the city in the 1960s led to an influx of Mexican immigrants to the neighborhood, and a number of other Latino groups have arrived since then. This cultural history has cemented Pilsen’s reputation as a port of entry for immigrants seeking their own and created a sociopolitical context ripe for public art and muralism.

“One thing that I’ve stressed in the class is that Pilsen has always been a gateway community,” says Ruiz. “It’s always been a place where new immigrants go to find people who speak their language, who eat their foods, who share their culture – and we’ve seen several waves of that in the history of Pilsen.”

Ruiz has been tied into the Pilsen community since visiting the area and realizing the need for documentation and preservation of the area’s culturally-precious murals. In concurrence with Notre Dame’s Historic Urban Environments (HUE) team, Ruiz has received two grants to build an app that documents the art of Pilsen. When completed, the app will provide visualizations, information, and analysis of the street art, functioning almost as a personalized virtual walking tour of the neighborhood.

AMST 30142 combines the artistic criticism you’d expect from a class on muralism with practical work for the app, a combination that Ruiz says enhances the students’ engagements with the Pilsen neighborhood. Research done in this course will contribute directly to Ruiz’s project, assisting him in the development of this archival digital humanities project.

“They’re part of a project that’s bigger than just class work,” Ruiz says. “Every single assignment in the class is designed to be practical and applicable to some dimension of the Pilsen project… I’ve really designed [the class] to both educate and compel students to roll up their sleeves and work on the project with us.”

The class will be making two visits to the Pilsen neighborhood: one as a large group, and another after they have broken down into smaller research groups. The purpose of such experiences, Ruiz says, is to critically examine the public art displayed on the streets of Pilsen while simultaneously gaining exposure to and understanding of the neighborhood itself. In-class discussion can only go so far, he adds, when it comes to comprehending the complicated dynamics of an “authentically ethnic” community like Pilsen.

Marie Fazio, a senior American Studies major, is an intern with Ruiz on the app project in addition to being a member of the class. Her work has required even more trips to the neighborhood, where she has digitized slide images from the Chicago Public Art Group archives of Pilsen murals dating back to the late ’60s.

“The physical visits to the neighborhood are imperative in a project like this,” she says, “in gaining understanding and context of the murals themselves and the people living in the buildings that they adorn. It’s all interconnected.”

Both in Pilsen and on campus, the course material walks a carefully crafted line between criticism and self-reflection. Via trips to the Snite Museum and in-class discussions on “thought experiment” homework, Ruiz looks to connect the concepts of art analysis and lived experience.

“How you interpret a text is directly related to the person that you are and the experiences you’ve had,” he says. “I really try to open up the time and my own heart to listening to some of their personal stories and reflections, because I think it matters.”

Ruiz hopes that, in its pushback against the encroaching gentrification so present in major US cities today, AMST 30142 can be an empowering force for both his students and the Pilsen community.

“Murals are, right now, actively a tool against gentrification,” he says. “We are looking for the ways artists respond to demographic changes in the neighborhood through muralism. The class goes far beyond just simply understanding art for art’s sake, but that it’s really about the politics and cultural politics of public art.”

The professor is aware that some may criticize his use of modern technology (namely, mobile apps) to prevent modern gentrification (namely, the erasure of neighborhood murals). But Ruiz says that the support he has received in grants – one from the University’s Faculty Research Support Program and the other through the Whiting Public Engagement Fellowship – will allow him and his team to create without the potentially problem-causing need to turn a profit.

Further, steps are being taken throughout the process – from app creation and mural documentation to in-class ethical discussions – to minimize intrusion effects on the Pilsen community. Ruiz has worked together with the Pilsen Alliance and the lower west side-based National Museum of Mexican Art to create the digital archive, and just as the murals themselves are free for all to enjoy, the archivists plan to make the technological applications of their work free of charge as well, for both community members and visitors.

“We’re partnering with the National Museum of Mexican Art and the Pilsen Alliance as a way to provide tools to people who are doing the work for the community, but not profiting from the community,” Ruiz says. “The class is constantly thinking through some of the ethical issues surrounding tourism and whether or not we’re contributing to [the industry].”

Ruiz is emphatic about his overarching goal for the class.

“I hope the students leave the class with a sense of empowerment, that they leave feeling like they can view art, engage with art, and interpret art on a more sophisticated level because they’ve been in a class that empowers them as interpreters, as critics,” he says. “They have that right.”

The stress Ruiz has placed on course content impacting students beyond the classroom is already leaving a mark on Fazio.

“The works can act as a true grassroots voice of the people in a community,” she says, “exhibiting anything from cultural pride and historical events to the current struggles the community is facing.”

As seen in the Columbus mural controversy on campus this year, this voice-of-the-people quality of murals can be seen in communities well beyond southwest Chicago.

“Muralism is never just paint on walls,” Ruiz says. “It’s always attempting to nudge the culture in some direction or another. How amazing that we have a set of murals that have been a source of controversy for decades on this campus right below us, and they’re just yet another testament that murals are particularly powerful representations of the place in which they appear.”