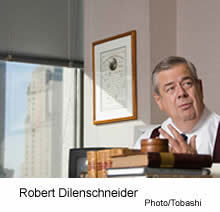 In the era of email overload, public relations guru Robert Dilenschneider ‘65 likes to send thank-you notes, the old-fashioned kind that come in envelopes with stamps on them. It’s a way he circumvents the crush of emails that flood the in-boxes of power players every day.

“I believe you should thank people for virtually everything,” he says. “I treasure a personal note. I save them.”

Dashing off a personal note is among Dilenschneider’s prescriptions for success, documented in his eighth book, Power and Influence: The Rules Have Changed. For those up-and-coming executives who want to prosper in the 21st century, he suggests: embrace the technology, answer your emails within 24 hours, read the blogs and prepare to re-create yourself many times during your working years because job security just ain’t what it used to be.

Other strategies, like his devotion to writing notes, touch on age-old niceties that still resonate today. “Decency, civility and straightforwardness are very, very important,” says Dilenschneider. “A letter can be quite powerful.”

The 64-year-old, who lives in Darien, Connecticut, and commutes to his office on the 26th floor of MetLife building in midtown Manhattan, knows the power game. In 1967, shortly after earning a master’s degree in journalism at Ohio State, he landed a job with the public relations firm Hill & Knowlton. Within 20 years he’d become president and chief executive officer of the firm, which then had 82 offices around the world.

He hobnobbed with presidents, kings and corporate barons. But by 1991 he had lost interest in administering the corporation and quit to form The Dilenschneider Group. The corporate counseling and public relations firm brought him back to providing personal service to his clients. A few big ones, including Ford and Procter & Gamble, kept him on retainer.

In his book, he reveals the secrets of his success as he moves from lunches at private clubs in midtown Manhattan to the Davos World Economic Forum in the Swiss Alps. Much of it relates to nurturing his network of friends and professional colleagues. Those contacts can be turned into quite a payday. When one client needed introductions to four top executives, Dilenschneider charged the guy a cool $25,000 to place the phone calls.

“He’s a man who can pick up the phone and reach a CEO,” says Jim Lukaszewski, a New York crisis management executive who became acquainted with Dilenschneider more than 20 years ago after receiving one of his thank-you notes. “There are very few public relations CEOs who can do that. Bob Dilenschneider has access. He can get in the door.”

Lukaszewski moderated a recent forum in suburban New York with public-relations professionals who’d come to hear Dilenschneider talk about his new book. At the speech, he encouraged the PR pros to adapt to new technologies, search for power but never forget to share it, and to grow their network by reducing it whenever possible.

“Trees don’t grow unless you prune them,” he told them. “The same thing applies to human capital. And it applies in spades after a setback, or worse.”

While having the ability to reach the top dogs in industry still commands top dollar, how Dilenschneider serves his clients has shifted since his Hill & Knowlton days. In the 1980s, the daily newspaper reigned, so one could help shape public opinion with the right contacts at the nation’s leading publications. Dilenschneider could rely on professional editors to filter what got into print in the 24-hour news cycle.

That changed with the advent of the Internet. The popularity of blogs—those citizen-run web sites—has opened up the arena of commentary to all comers. Though that wide-open arena has empowered millions, Dilenschneider says the blogsphere has spawned a more venal world, with myriad outlets for critics to spew their venom. He cites studies showing there are 4 million sites that attack corporations.

This has created countless platforms for criticism of his clients. Dilenschneider says he often advises them to ignore some of the attacks, letting the one-day slam die for lack of interest.

Still, they cannot leave the negativity unanswered. For example, if a client who is under fire gives a speech or receives a community commendation, Dilenschneider will make sure the text and notice of the award gets posted on the web. “At some point you have to speak out, but it’s not a good thing to reinforce the negative,” he says. “You need to put out positive stuff about the issue at hand, and that will overcome the problem. And if you are a good writer, you will eclipse the one-sentence guys trying to smear you.”

Putting one’s good foot forward in the community also can help counter the negative buzz. Dilenschneider laments that today’s CEOs tend to be less involved in their communities.

“The giving back just isn’t happening today,” he says. “There used to be more of a community spirit, with CEOs leading fund-raising drives or helping out in the food kitchens. The CEOs led by example.”

That was the message Dilenschneider learned on Notre Dame’s campus in the early 1960s—practice humility, be active in your community, keep a balance in one’s life and get caught doing good. When an executive came to his office recently, concerned about what his obituary would say, Dilenschneider showed him a card on his desk that reads: “Our duty is to do good and be courteous and polite to all people.”

“I told him he shouldn’t sweat his obit,” says Dilenschneider. “He needed to sweat what he was doing right now, and he had to try to do the right thing.”