This past August, I started my first post-graduation job in Lewiston, Maine, and moved into my first one-bedroom apartment in neighboring Auburn.

I was no stranger to moving. Between college, summer internships, and study abroad, I’d lived in five different places in five years, and I was a pro at meeting people and exploring. Lewiston-Auburn was a smaller place to explore, I reasoned, but why should it be different? 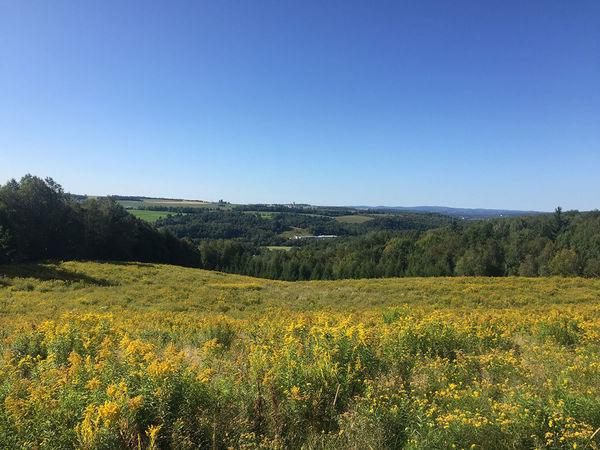 A hiking-trail vista near Sherbrooke, Quebec

The difference, of course, was the real world’s lack of freshman orientation or summer-intern Facebook group. There were no roommates, no built-in group of people eager to meet and look around. Outside the friendly confines of a like-minded new arrivals group, I’m not a person who can strike up a conversation with whoever, wherever. A thousand miles from Notre Dame, with no dorm movie nights and club info sessions in sight, I would need to work harder to find my people.

So during my first two weeks in Maine, when I wasn’t working, I embarked on a series of mini-adventures. I went to an outdoor concert at a hot-air balloon festival. I drove to Portland and toured Henry Wadsworth Longfellow’s childhood home. I shopped at the Freeport outlet stores. I hiked some trails in Lewiston. I went to a Unitarian Universalist post-service coffee hour.

But by Labor Day weekend, I’d run out of obvious stuff to do. I’d met my coworkers, most of whom were a decade or more older than me, and some churchgoers, who tended to be well beyond that, but not yet anyone I could get a drink with on a Friday night. In the back of my head, I knew I’d need more than two weeks to find the people and places I’d like. But I’d just come off four years of semesters abroad and summer internships. In that world, if you hadn’t made friends after two weeks? Good luck.

When I woke up that Saturday and saw that it was only 8 a.m., I realized I needed to get out and do something, something fun and cheap, something whose success didn’t depend on meeting new people.

So I decided to drive to Canada.

Why not? It was only three hours away, and I’d heard that a few miles across the Quebec-Vermont border was the town of Coaticook, home to (among other things) North America’s longest suspension footbridge. An afternoon in a Whole ’Nother Country was way more appealing than staring at the white walls of my apartment all day, or forcing myself to hit another event, alone.

I looked up the Parc de la Gorge de Coaticook, the park/trail system/campground that contained the suspension bridge. It’d be open into the evening, but if I wanted to get there and have a few hours of hiking time, I’d need to leave now. So I changed into workout pants and tennis shoes, grabbed my passport and phone charger and a book, and, anticipating my loss of international cell service, took screenshots of the route to Canada on Google Maps. Then I called my mom so somebody would know I’d be in a Whole ’Nother Country for the day. At her suggestion (“You’re not spending the night?”), I tossed another shirt and some extra underwear in a backpack.

Then, 45 minutes after I decided to venture to the exotic land of southern Quebec, I got in the car and drove off. Instead of being alone in Auburn, I was young, single, and on an adventure. This was more like it.

I lost cell service about as soon as I left Auburn. The drive had turned very rural very quickly, and AT&T’s decidedly city-friendly coverage did not keep up. But in place of my preselected podcasts was New England’s spectacular late-summer scenery, miles and miles of pine forests and lakes and winding roads, dotted with the occasional tiny town.

I thought about simply stopping for the day three times: at a large yard sale not far outside Auburn; at Grafton Notch State Park, where you can wind through conifer-covered hills and get out to hike wherever catches your eye; and in Errol, New Hampshire, where a lone propeller plane poked out of a building marked “Errol Int’l Airport.” I kept going because I wanted to make good time — and also because I worried that stopping in places I hadn’t researched wouldn’t be as safe, or as fun, by myself.

As I pumped the brakes down a steep incline around a northern New Hampshire lake, I decided I was going to spend the night in Coaticook after all. Though the state roads I’d driven on certainly didn’t require stunt driving, I’d just spent four years on South Bend’s perfectly flat ground, and I knew I’d be too nervous to navigate New England’s curves and hills in the dark.

After a miles-long sliver of Vermont, I was at the border. The Whole ’Nother Country delivered on its ’notherness: The lakes and hills continued, but there were fewer trees, more rolling pastures. As I rolled into Coaticook, I marveled at the subtle differences. Speed limits in kilometers! Stop signs reading Arret! The cell service is Bell (and I can’t use it)! Thankfully, my GPS still worked, with data or without.

At the southern edge of Coaticook, I came upon a combined fast-food place and motel. That would do. The woman at the counter greeted me in French (“hi,” I responded sheepishly), took my personal-pizza order, and booked me a room. 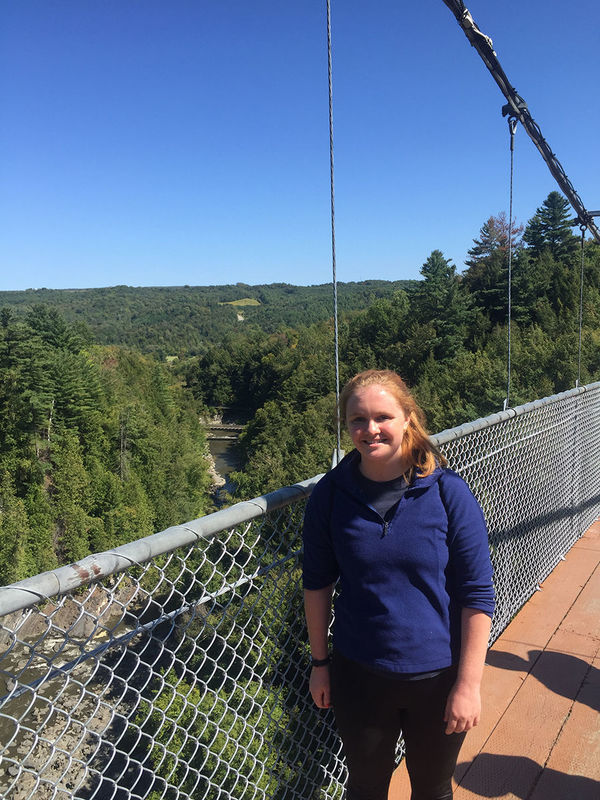 The author on the Parc de la Gorge bridge

I drove through the town (Rues and rivières! Tim Horton’s!) and found the Parc de la Gorge, which in addition to the suspension bridge boasts campgrounds, a small water park, an after-dark multimedia light show, and trails for skiing and biking. I made it to the famed footbridge, the barrier between me and a 50-meter-deep gorge swaying as I walked across. I got a family to take my picture on the bridge and then wandered around the park, climbing up and down metal stairs built into the sides of the gorge and trying to decipher some of the French I heard around me. I didn’t expect to talk to anybody, but I still kept my eye out for individuals or couples who looked open to small talk. Eventually, I found a quiet part of the park and settled in among some boulders to read a book. It felt nice to be hidden.

Obviously, I hadn’t made a plan for the evening. Back at the restaurant, eating my first and hopefully last bowl of poutine, I frantically Googled. No free events to speak of, but there were a couple bars nearby. That would do. I had only packed hiking clothes, but I found regular shoes in my car, and that extra shirt my mom got me to bring was nice enough to be presentable.

The place was crowded. I wanted to bolt, but I was young, single, and on an adventure, so I sat at the bar and ordered a beer. After a few seconds I realized I couldn’t just sit there staring, so I took out my phone. I hoped that if people noticed me, they’d think I was waiting for someone.

A bartender asked me something in French. I mustered the confidence to respond, entirely incorrectly: “Jay non parluh francais.”

She gave me a look. “Do you speak English?”

“Yes.” Probably should have answered in English in the first place.

“Can you please move so that there are two seats in a row open?”

I moved to the end of the bar, and a touchy-feely couple took the seats next to me. Had I really thought that by going to a bar in hiking clothes in a Whole ’Nother Country, I’d feel any less out of place? I finished my beer and left.

The next morning, I got up early and drove to Sherbrooke, a larger city a few miles north. My plan was to walk around in the Parc du Mont Bellevue, supposedly home to a nice overlook, and to embrace my solitude, getting the idea of talking to people out of my head entirely.

But by 9 a.m., I was driving at a whopping 90 kph towards the border. Because of my lack of skill in both French and navigation, I had been unable to find the overlook using the park’s walking paths, and I’d decided to try my luck on a ski trail. Not far from where Google Maps told me the overlook was, I walked through a beehive of some kind and got stung twice. My ankle and behind were throbbing by the time I found the walking path again. It was time to go home.

The next Tuesday, I told my coworkers the story of my spontaneous adventure to a Whole ’Nother Country with all the appropriate embellishments.

“So then,” I said when I got to the part about the bee sting, “I thought I should maybe be in a place where I have cell service and I speak the language.”

“Or you could have gone with someone,” my coworker pointed out. I could only shrug.

My bee-stung ankle itched for the next few days, but I tried to leave it be. It would need time to get better.

Emily McConville '17 is a writer in the communications office at Bates College. She has some friends in Maine now.