The last time I went to a conference, I came back with an inbox full of unanswered emails and a new tote bag. When Sarah Lum went to the International Symposium on Microscale Separations and Bioanalysis in 2016, she came back with a doctoral dissertation project.

Then a second-year doctoral student in the Department of Chemistry and Biochemistry, Lum had signed up to present her research on bacterial separation, but the conference was small. At one point, the only events on the schedule were one talk on pharmaceuticals and another on forensics. 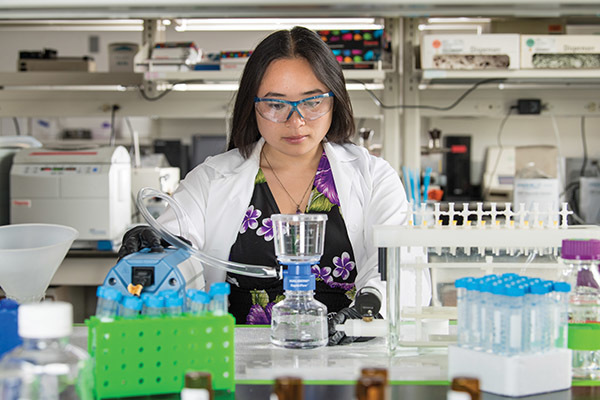 “Neither one applied to me or my research,” Lum says, “but Norm” — Norman Dovichi, Lum’s advisor and the Grace-Rupley Professor of Chemistry and Biochemistry — “sent me to the conference, so I thought, ‘Eh, may as well go learn something.’”

She picked the forensics session, and her journey toward one of Notre Dame’s more unusual doctoral careers began.

In the talk, analytical chemist Bruce McCord of Florida International University spoke of what’s known in the forensics community as “the backlog” — the hundreds of thousands of “rape kits” sitting untested in crime laboratories across the United States. Medical personnel use a sexual-assault evidence kit, better known as a rape kit, to perform an exhaustive physical exam that gathers the DNA evidence left behind on an assault victim’s body.

That evidence can be crucial in solving a crime and preventing future ones, but it often goes untested. Some kits fall into the backlog because detectives and prosecutors fail to request DNA analysis. Others sit in evidence lockers for weeks or even years because of financial or scientific barriers: Testing a rape kit is expensive, difficult and time-consuming.

As Lum listened to McCord’s talk, she realized that her work in Dovichi’s lab might be able to resolve some of those issues.

“The main problem in the rape-kit analysis,” Lum says, “is the separation of male from female DNA.” Swab beneath the fingernails of a survivor who clawed at her attacker’s arms, and you’ll get DNA from the attacker, but you’ll also get a lot of what was already on the survivor’s fingers. “So if you were take that and analyze it,” Lum says, “you’ll get a very, primarily, female profile. And that’s kind of useless to us, because we know who the victim is. We’re trying to figure out who the perpetrator is.”

Existing separation technologies may take days to distinguish perpetrator DNA from victim DNA. In Dovichi’s lab, Lum had been working with a separation method called capillary electrophoresis. She used it to study proteins, but she had a feeling it could apply to rape-kit analysis — and would require only a few hours to produce results.

She caught up with McCord and asked if anyone had tried capillary electrophoresis in this field. To his knowledge, no one had.

“You should give it a shot,” he said.

Lum came back to Notre Dame and, in a series of after-hours experiments, did just that. Using yeast and E. coli as stand-ins for epithelium and sperm, she determined that capillary electrophoresis could separate such disparate types of cells. She shared her work with Dovichi, who agreed the project was bigger than a few late-night tests. At a university without a forensics department, Lum’s forensics experiment had just become her doctoral research project.

Since then Lum’s research has consisted of a lot of fieldwork and many more conferences. She and Dovichi patented her technology. She met with leading forensics experts and crime-lab scientists to ensure her method would be feasible in a real-life police department. Collaborators stepped in to help Lum ethically source the tissue samples needed to refine her tests. Law enforcement agencies, including the New York Police Department, came on board.

As buzz has built around the project in forensics circles, so has praise for the student spearheading it. Last year, Lum won the Young Scientist Award at the very same microscale separations and bioanalysis conference where she had first heard of the backlog — a rare honor for a graduate student in her mid-20s, since the award can go to any student, postdoc or professor younger than 35. A few months later, she earned a graduate research fellowship from the National Institute of Justice, which provides financial support to students whose research furthers the interests of the United States Department of Justice. Not bad for a forensic scientist still new to the field.

“Sarah is truly an exceptional student,” Dovichi says. Realizing, as Lum did, that a technology you work with for a specific purpose could solve an unrelated problem is a “brilliant leap intellectually,” he adds. But to go from that “aha!” moment to proving the theory in a lab, finding collaborators and earning funding? 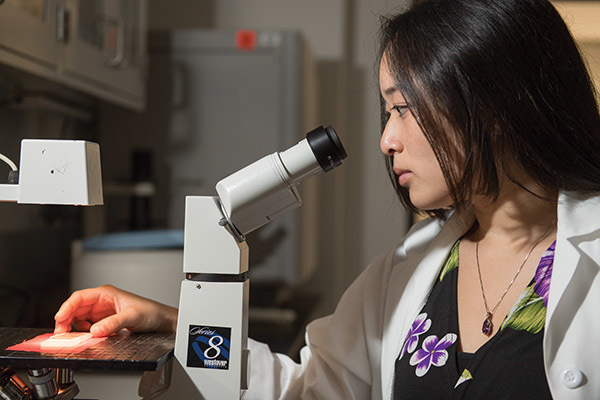 Lum plans to finish her doctoral studies within two years, at which point her next brilliant leap — from exceptional student-scientist to real-life forensics problem-solver — awaits. She’s worked with Notre Dame’s Idea Center to pitch her technology to manufacturers and hopes that, by the time she graduates, a major laboratory technology firm will be ready to scale up her project and get it into crime labs.

“We want something that can be broadly dispersed among crime labs regardless of the resources that they have,” Lum says. “Because our point — or at least my whole purpose — isn’t to make money off of this. It’s to actually develop something that can help people.”

Translating Lum’s work to crime labs across the country will be a long and challenging process. Even if a manufacturer picks it up, someone will have to teach lab technicians how to use the technology. Someone will have to convince attorneys and the courts that it’s better than previous methods. But the potential to help people is enormous. One might say “exceptional.”

Standard estimates place the backlog at more than 400,000 untested kits nationwide. Testing even a fraction of them could identify unknown perpetrators, put repeat offenders behind bars and give closure to thousands of victims of sexual assault.

“It’s not just a physical crime,” Lum says. “It really affects an entire person — your mental state, your emotional state, how you view yourself after something like that happens.”

Ending the backlog is not simply a matter of solving a scientific problem, she says — “it’s social justice.”