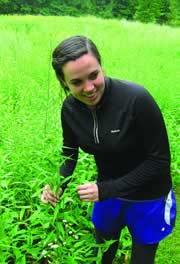 In theory, the invasivore idea is brilliant: Eat what you want to reduce. But is it reasonable? Should people who don’t frequently peruse edible plant and survival encyclopedias forage in the woods and try to make use of nature’s ingredients?

Despite a slight aversion to nature, I wandered into the woods at Love Creek Nature Center in Berrien Center, Michigan, in August with our team of graduate invasivores. We had called ahead asking about garlic mustard, Japanese honeysuckle and Canada goldenrod, so when we arrived, the staff had prepared a map highlighting where to find the most prominent patches of these invaders. Unfortunately, garlic mustard and honeysuckle were largely out of season, leaving behind only a few withered stragglers. Canada goldenrod, on the other hand, was rampant. We identified this plant by its leaves — alternating on the stem, lance-shaped and sharply toothed, with furry undersides and three parallel veins. After seeing one, I was able to identify them. We harvested, making sure to remove the roots so they would not spread.

I was hesitant to put a bunch of leaves in my mouth — to the point where I watched my guides for a while to make sure no negative side effects would ensue — so I tasted just one. Peppery. Not bad.

When we returned to campus, I more eagerly took a portion of the goldenrod leaves, which taste similar to parsley or cilantro, so I could write a recipe for invasivore bruschetta. I gave the plants a thorough wash as I didn’t know who or what had browsed through them before me. The stems seemed firm and unappetizing so I just plucked the leaves for use in my recipe.

The furry leaves make Canada goldenrod easy to identify but don’t offer the most appetizing texture, so I chopped the leaves into very small pieces so eaters wouldn’t be distracted by the hairs and would still get the peppery taste. I combined them with diced tomatoes, fresh mozzarella, olive oil, salt, pepper and garlic salt. Then I toasted some garlic bread, wrote down the number for poison control (just in case), and tasted it. It was surprisingly delicious. The Notre Dame Magazine staff partook, and at press time we’re all still alive and craving another batch. We later sampled Sheina Sim’s Himalayan blackberry custard tartlets, which were also incredibly good.

So, I’m convinced. After experiencing the entire invasivore process from bug spray to blender, I can attest that it works. I would, however, be hesitant to pick the plants alone. A few tips, then, for the more adventurous:

o Find a local nature center or preserve that is well-staffed and ask for guidance and directions.
o Study the species you want before you go and bring photos for identifying the plant.
o Be aware of pesticides and pollutants when eating foreign plants.
o Don’t eat anything you haven’t identified with 100 percent certainty.
o To learn more or to Ask the Invasivore, visit Invasivore.org.

Tara Hunt was the summer 2011 intern at Notre Dame Magazine.