For her 90th birthday, Helen Hiatt received a white T-shirt that had been hand-painted to say “Mother of the Huddle,” her long-standing nickname. The shirt was signed with birthday wishes and thank-you messages by all her coworkers.

At one time, all of Hiatt’s clothes were handmade. Before she lost her eyesight, she was an avid seamstress who made clothes for her entire family and was happy to tailor garments for students. 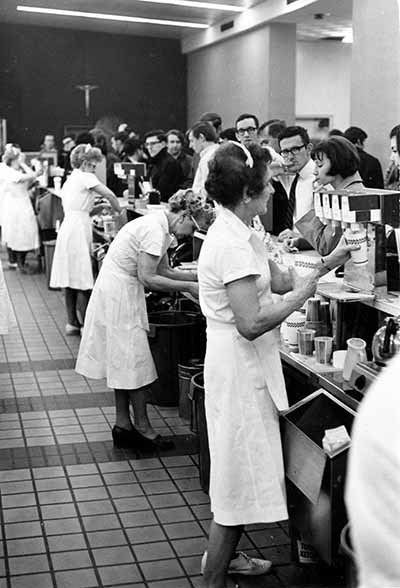 She had been employed at the Huddle since 1967, when she came in for a job interview and was asked if she could start that moment. For 11 years she worked the old cigarette counter until she transferred to the register, where she would happily toil for another 25. She originally retired in 1988, shortly before Father Hesburgh and Father Joyce went on their retirement trek around the world, but when they returned, Hiatt was scurrying around the Huddle once more. With her signature wit, she told them if they were going to leave, someone had to stay around Notre Dame and teach everyone the ropes.

In her later years, Hiatt’s hours were limited — three or four hours, five days a week — but she always made time for a cup of black coffee with old friends, students and administrators, especially Sister Jean Lenz, with whom she chatted each morning in the same booth in the Huddle. Even as her abilities declined, Hiatt was generously accommodated by the Huddle staff, who ensured she could work as long as she liked. And until early 2013, she did.

On July 26, Helen died at her home in Elkhart at age 92. Survivors include a daughter, Mary Beth Bradenburg, eight grandchildren, nine great-grandchildren, and thousands of Notre Dame alumni she encountered throughout the years.