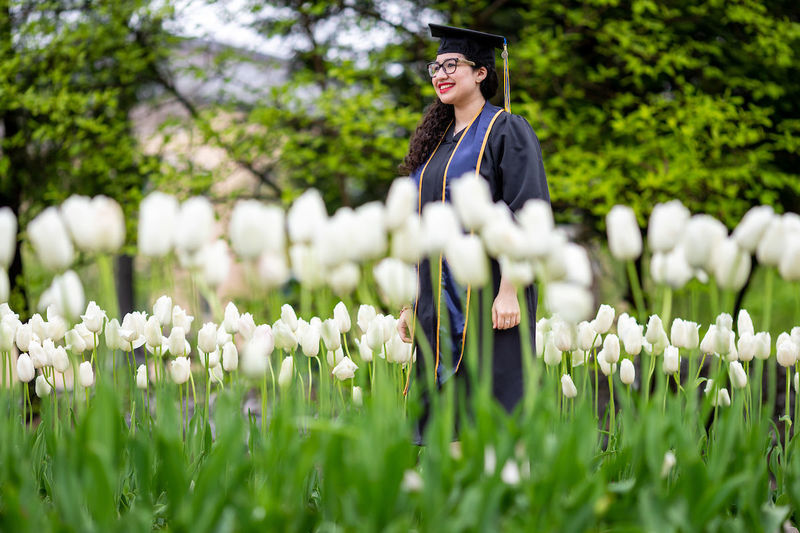 It was a University of Notre Dame commencement day like no other.

Notre Dame Stadium, where the ceremony had been scheduled to occur, was vacant and locked. The campus quadrangles, traditionally crowded with strolling graduates and their families snapping photos on this most important day, were mostly quiet except for the falling rain. Campus trees and flower beds were in spring blossom, but seen by few.

As a result of the coronavirus pandemic, Notre Dame on Sunday, May 17, held the first virtual degree conferral ceremony in its history, awarding 3,207 degrees to the Class of 2020.

Bridget O’Reilly ’20 walked across the campus with her parents and sister late in the afternoon, a few hours after she received her bachelor’s degree via the virtual conferral ceremony. “I packed a lot today. And I watched the ceremony. Tonight I’ll celebrate with some friends,” said O’Reilly, who continued living in South Bend and taking her classes online this spring after the University ceased in-person instruction because of the spread of the virus. She planned to drive home to Yardley, Pennsylvania, with her family on Monday.

“They saved a lot of the ritual and ceremony for next year,” O’Reilly said of the online commencement. She’s looking forward to celebrating fully when the Class of 2020 convenes to make up for what it missed this year during festivities set for Memorial Day weekend 2021.

Freshly minted Notre Dame 2020 MBA graduates Shraddha Goyal, Chinmay Jain and Christie Deepa took photos of each other Sunday afternoon on the front porch of the Main Building. With no formal ceremony to attend, they took turns posing in a single shared graduation gown and stole. The stoles, sent to graduates by the University, include an embroidered phrase: “Still Notre Dame, even when far apart.”

The trio participated with other Mendoza College of Business MBAs in a Zoom video conference graduation ceremony and they watched the virtual degree conferral. Goyal said job prospects for new MBAs have been disrupted and delayed amid the pandemic and global economic downturn.

Sarah N. Wright ’20Ph.D. received her degree in chemistry but didn’t plan to watch the virtual commencement ceremony. “My family can’t be here, so it’s not really worth it,” she said. “I totally understand why the University is (having a virtual commencement). I think Notre Dame is being wise.”

As a doctoral student, Wright said the highlight of her final year was presenting and defending her doctoral dissertation in February. When that was complete, Wright knew she was a graduate, after six years of work and study at Notre Dame.  “That meant so much more than the (commencement) ceremony,” she said.

Wright is among the fortunate graduates. She’s been hired as a senior scientist in vaccine research for Merck Research Laboratories. In June, she and her husband, Josh Wright ’19M.S., will move to West Point, Pennsylvania, where she’ll start work in a Merck laboratory.

She knows fellow graduate students whose research and possibly their degrees will be delayed by the COVID-19 campus shutdown, and others who had summer jobs or job searches halted by the pandemic. Some peers had to delay their dissertations or present their defense via Zoom rather than in person, she said. She considers herself lucky. “God kept opening doors for me,” Wright said.

During Sunday’s online ceremony, University President Rev. John I. Jenkins ’76, ’78M.A., formally conferred degrees on the graduates. In pre-recorded messages, deans from each of the eight colleges and schools presented the candidates for degrees.

In his charge to the class, Jenkins made reference to the “Greatest Generation,” as Americans who grew up during the Great Depression and helped win World War II have come to be known. “What set them up for greatness was the adversity in which they were reared and the challenges that shaped them,” he said.

Hardship has a way of bringing out what is highest and best in all, Jenkins said. The story of the Class of 2020 will include the massive social, economic and public health challenges that are now facing the world, he said.

“I’m sorry for these hardships, but they are your opportunity,” Jenkins told the graduates. “You see, you cannot be the Fighting Irish if you never had to fight through anything. You have your fight. Seize it.”

John J. Brennan, chair of the University’s Board of Trustees, gave the opening prayer and Provost Thomas G. Burish ’72 served as master of ceremonies. Burish will step down as provost July 1 after 15 years of service.

The three men spoke from a campus studio, with an image of the Main Building as a backdrop.

In advance of the ceremony, all graduates received commemorative boxes from the University containing a letter from Jenkins, a graduation stole, a candle and a copy of the 2020 Dome, the campus yearbook. Diplomas will be mailed to the graduates in June.

A few graduates still in the South Bend area took advantage of sunny 70-degree weather on Saturday to visit campus. Small groups of students — some in graduation caps and gowns, others in jeans and sandals — snapped photos of each other on the main quad and on the front steps of the Main Building. Long rows of tall white tulips lined the walkway to the Grotto, where individuals and families stopped to light candles.

Also on Saturday, one by one, 52 Notre Dame ROTC graduates took their commissioning oath online during a virtual commissioning ceremony. Many of the graduates participated from their homes, with parents and siblings joining them.

Admiral Christopher Grady ’84 referred to the pandemic in delivering the commissioning ceremony address, saying: “This once-in-a-lifetime, once-in-a-century challenge is fundamentally changing how we do nearly everything. And this ceremony is no different.”

The new graduates join the ranks of those whose mission it is to preserve freedom for the other 99 percent, Grady said. “An act, I believe, that is the truest measure of what it means to be a citizen.”