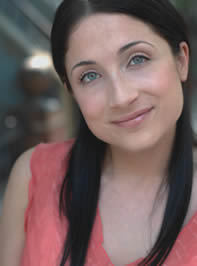 Like many a theater major before her, Katharine Sise, Notre Dame class of 2001, arrived in New York City after graduation with big dreams and a paltry amount in her bank account. She wrote short stories in the mornings, auditioned in the afternoons and took a bartending job to bide her time until her big break.

A fine plan, until the day she dropped a pricey bottle of champagne on the way to deliver it to Robert De Niro’s table at Tavern on The Green. Clearly, serving drinks was not working out. Her backup plan to pay her bills? Designing jewelry, of course.

Sise had no design experience to speak of, aside from playing around in her grandmothers’ jewelry boxes as a child, but she took a retail position at a hip boutique in the Meatpacking District. “I thought it would be a great creative environment to work in, and it was,” says Sise. “I was really inspired by the stuff around me, and I started to make jewelry just for fun, or so I thought.”

Then a customer came in and wanted to buy the necklace Sise was wearing, which was one of her originals. “At that point the boutique owner said, ‘We’d better get a shelf for you.’ She let me sell a few of my pieces, and it just kind of took off from there,” says Sise.

Jen Ford, then fashion news editor for Lucky magazine, spotted Sise’s work and featured her in the May 2005 issue as a “designer to watch.” Sise parlayed the press coverage and her sales at the first boutique to convince other shops to place orders. Eventually stores started calling her, and she had a roster of famous clients from Kate Winslet to Cameron Diaz to Kelly Ripa, a boon to any designer in a celebrity-obsessed marketplace. Her jewelry, which Sise describes as “modern, eclectic and nature-inspired,” popped up in all the major fashion magazines, national ad campaigns for Gap and Keds, and on such TV series as Gossip Girl and Brothers and Sisters.

Drawing upon her acting experience, Sise booked television gigs as a style expert, eventually working for about 18 months as a co-host for a show on The Home Shopping Network. A few years after ditching bartending, Sise was supporting herself financially solely through her creative pursuits.

All the while, Sise was writing. “The first creative aspiration I had when I was younger was writing. I was always writing stories, always writing fiction. And when I went to Notre Dame, I originally wanted to be a writer when I got there freshman year, before I switched my major to theater during my sophomore year,” she says.

In 2008, reflecting on her own unconventional career path and the missteps and triumphs along the way, Sise set out to come up with a blueprint for women looking to make a living by following their passions. “Other careers have step-by-step paths. Lawyers go to law school, doctors go to med school,” says Sise. “With a creative career, it’s sort of like you’re out there floating in the wind.”

Sise’s book, Creative Girl: The Ultimate Guide for Turning Talent and Creativity into a Real Career, was published in September by Running Press. Written in upbeat, encouraging prose and aimed at CGs (creative girls) in fields ranging from acting to graphic design, the book is a kind of survival guide for achieving a career that is rewarding both personally and financially. Sise offers up wisdom gleaned from interviews with a wide range of talented women, including Jane Lauder, general manager of Origins skincare brand and a granddaughter of cosmetics mogul Estée Lauder.

“I really learned a lot from those interviews, how people grew their businesses and the mistakes that they’d made,” says Sise, 31. Her own winding path to career success also figures large in the book’s major lessons.

“It’s really important to be somewhere where the world can find your work. There are some creative fields that are solitary, but for the most part, people need to see you,” she says. Indeed, if she had never taken the job at the Meatpacking District boutique, which counted many fashion editors as customers, Sise’s designs may have never caught the eye of Ford, now the fashion news director at Lucky.

“They felt like they were all one-of-a-kind, which set them apart from other things that we were seeing in the market,” says Ford. “That is a trend that will never go away, because everybody wants something that separates them from the rest of the pack in terms of what they wear.” That first bit of press in Lucky led to more sales and more press. “Then people start to call you, which makes it a lot easier,” says Sise.

“Katharine . . . has a very clear direction of what she does and what her look is. And I think that that’s why she has such a following and has been able to cultivate it over the last five years. She has a very distinct vision,” says Ford.

In 2009, Sise jumped at the chance to work with Target when representatives from the mega-chain, known for its buzz-generating designer collaborations, approached her to do an exclusive, limited-run jewelry line. The deal enabled Sise to reach a mass audience for the first time. “I just figured how to make something in the style of what I make, but with the Target customer in mind — their price point and their budget,” she says.

In Creative Girl, Sise urges readers to “network like a superstar,” and at least some of her success is due to her tendency to fearlessly strike up a conversation with pretty much anyone she encounters. She once stopped a woman in an airport bathroom to compliment her on her sunglasses, and they started chatting.

“She seemed really artistic, and I love talking to creative people,” says Sise. The woman said she was a singer and that she would be happy to be interviewed for Sise’s book. Only later did Sise learn that she had been talking to Melody Thornton of the Pussycat Dolls. “Here I am thinking I’d be helping her, she’s an aspiring singer. Yeah, right,” says Sise, laughing. “It’s about really being open. You never know who’s standing next to you in line.”

Plenty of people who embark on an unconventional career path are met with quizzical looks or worse from well-meaning relatives and friends concerned about their stability and financial well-being. Sise, who grew up in Loudonville, New York, just outside of Albany, was fortunate to have the opposite situation. Sise’s parents, Jack and Mary; sister, Megan, an ’04 ND grad and a medical resident in Boston; and brother, Jack, an investment banker in New York City, were more like Sise’s personal cheering section than harsh critics.

The same is true of her husband, Brian Sweeney. “As a numbers person, he’s especially proud that I started my business from the ground up, without any financial support. . . . There’s no one better in the world to brainstorm ideas with,” Sise says.

All in all, Sise has taken a supremely practical approach to a creative life, and she devotes a large chunk of her book taking on the romantic notion of the starving artist.

“Oh, forget about that,” she says. “I don’t think it helps your creativity to be worrying about money. I think that the more financially successful you are as a creative person, the more that frees your mind and frees you to create and frees you period. And if you’re always worried about money, you’re going to have to take on projects that don’t mean as much to you, whereas the more financially solvent you get, you can take on more passion projects. There are a million reasons to be financially savvy as a creative person.”

These days Sise estimates that she spends about half her time on writing (she’s working on a novel), about 40 percent of her time on jewelry and 10 percent on television appearances. “It just boils down to where the work naturally flows. Jewelry I can work on at night, where writing takes a lot of brainpower and I love to do it during the day. TV is just as I book something.”

She has an exclusive jewelry line at Castor & Pollux, a stylish West Village boutique, and designs the occasional custom piece for a magazine spread. Last fall, major fashion label alice + olivia hosted a party to celebrate the publication of Creative Girl at their flagship Bryant Park store, and Sise continues to do promotional events that combine a book signing with a jewelry trunk show. “It’s perfect, because the audience is the same — creative women,” says Sise.

What’s next? Sise would love to use her acting background and on-air skills to somehow translate Creative Girl to television. “I think there’s a place for a positive show that spotlights women and their small businesses and how they work through the obstacles that arise when starting their own ventures,” she says. “There’s something special that happens with collaboration. I found so many people willing to help when I first started my business, and I think it would be great to watch others have that experience.”

In October, 2010, Sise returned to Notre Dame for a book signing and to speak with a class of senior theater students in the throes of weighing post-graduation options. “They had all these different questions about the business of making it work,” says Sise. “It made me remember exactly how I was then, which was that I knew I didn’t want to work in an office. I wanted a creative career so badly, more than anything else.”

The class was taught by Sise’s mentor at Notre Dame, Siiri Scott, head of acting and directing in the Department of Film, Television and Theatre, who gave her a piece of advice that Sise passed along to the students. “Siiri taught me how much work goes into having a creative career and that it’s not just sitting around idly and waiting for something to happen to you. It’s about being proactive.”

Sise also encouraged the theater students to think in an expansive rather than restrictive way about their creative journeys, being open to unlikely paths that may stem from their original pursuits. “It has a snowball effect to it. A lot of times if you do well in one field, that feeds into another, and that can progressively build your career. After I graduated, if I had said that the only thing I want to do is act, I would have missed out on all of these other amazing opportunities.”

Wendy G. Ramunno is a freelance writer in Philadelphia, Pennsylvania.