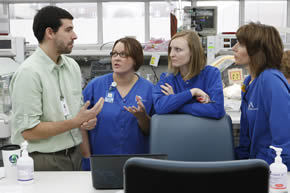 Every time Fernando Carvalho ’09MFA left his family and boarded a plane in Rio de Janeiro to travel back to school in South Bend, he carried something valuable with him.

Once it was the experience of six months’ work at Rio’s Independent Living Center retrofitting full-size wheelchairs to meet the unique physical circumstances of each impoverished child who needed one. Another time, it was what a man taught him about carrying heavy loads while delivering drinks out of low-slung barrels to thirsty patrons on Rio’s beaches. That lesson shaped Carvalho’s idea — a belt-mounted “hip harness” — for helping paramedics navigate the treacherous terrain of the city’s sprawling, hillside slums and transport patients on stretchers to competent medical care.

As Carvalho prepared for his final year of study in Notre Dame’s graduate program in industrial design, he packed a notebook full of sketches from a summer spent in a Rio maternity hospital and notes from a dozen penetrating conversations he’d had with the parents of premature infants. The parents shared the fears and barriers they felt they had faced as they began to assume care from the specialists who had stabilized their tiny, fragile children.

In South Bend, Carvalho then spent a year working with professors, doctors and nurses to fashion what he’d learned into what may one day be a new kind of cradle for infants transitioning from hospital intensive care into healthy life at home. He calls his cradle the Elo, the Portuguese word for “bond.” The cradle is proving valuable not only to his development as a product designer but to newborn intensive care at South Bend’s Memorial Hospital and — just maybe — to the future of healthcare in general.

Industrial designers think up new ways to make things work better. Their job in essence, says Carvalho’s adviser, Paul Down, Notre Dame associate professor of industrial design, is to transform their grasp of a problem into a manufacturable solution. The really good ones take fresh angles on problems that others may not even see.

For Carvalho, that means total engagement: watching, listening to and, when possible, living the experience of the people who will use his product. When, for instance, blind ND swimmers came to Down in search of ideas to help them swim straighter and know when to kick into a wall turn without the help of a human “tapper,” Carvalho joined Down, swim instructor Annie Sawicki and Kyle Walters ’07MFA on the design team. He promptly blacked out a pair of goggles and jumped in the pool.

Down says his former pupil “has this human sensitivity that places him in a position as a designer that takes ego out of the mix. His empathy for the end user is much higher.”

The collaborative result for the swimmers was a series of flexible rods, each with a soft ball on one end, called the AdapTap. It snaps onto floating lane lines and gives swimmers what Down calls “an abrupt yet friendly tactile encounter.” 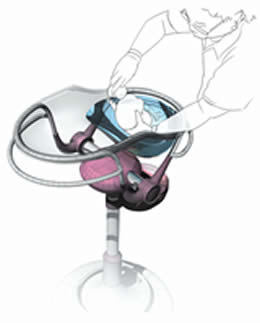 Carvalho refined his people-centered approach as he developed the Elo, pictured right. His observations and parent interviews at the Brazilian maternity hospital led him to identify several problems with the industry standard cradle. For one thing, it was designed for full-term babies, which made premature newborns appear even smaller and frailer to their frightened parents. The high bassinet walls, perfect for protecting large, healthy babies, made it harder to caress, handle or lift the preemies, or even to change their diapers. The cold, welded steel frames resembled those of medical carts.

Carvalho’s design indicated warmer materials that would meet the same sanitary standards and a shallower cradle bed that could be turned and tilted to make interactions more comfortable. He shaped an interchangeable bathing unit that reduces the effects of gravity on the baby’s body while allowing immersion in warm water, eliminating the shock of cold air. He also added frames for decorations and photos that would provide the baby with suitable stimuli and personalize the space for their families.

“Many times I think of designers as mediators of relationships,” Carvalho says. Officials at Memorial Hospital say that description accurately sums up the role he played for caregivers and families in their Newborn Intensive Care Unit (NICU) as he worked there last year.

Impressed by the heart, mind and method that produced the provisionally patented Elo and hip harness, the patented AdapTap and several other inventions, Memorial took a possibly unprecedented step last summer by hiring Carvalho on a full-time, trial basis as an in-house designer. While hospitals often retain part-time consultants who recommend new equipment or environmental changes to improve the quality and cost-efficiency of their care, administrators expected Carvalho would fit their hospital’s national reputation for innovation by focusing on the human aspects of the hospital experience, especially in the NICU.

Reg Wagle, the senior vice president of the Memorial Health Foundation, says the unit’s goal is “to give the best possible care, but also to be supportive of families who are in some of the toughest and certainly most profound moments of their life.

“What Fernando brings is that incredible eye to something that has been the standard for so long it was hard to think differently about it,” Wagle says of the still state-of-the-art unit that Memorial’s chief neonatologist, Dr. Robert White ’71, an international authority in NICU design, created two decades ago with the help of Tom Whitman, a ND professor of psychology.

Carvalho says current needs at Memorial, where administrators hope to break ground on a new children’s hospital within the next five years, have as much to do with interior and environmental design as developing better equipment. For six months, he researched new equipment purchases, helping clinical leaders get past the technical sales copy. He took photographs and crafted hundreds of full-color digital mockups to help the nursing staff visualize and vote on a decorative scheme for the NICU that would better define bedside spaces in the unit’s wide-open, white rooms and create a more human sense of life and flow. One flooring design concept incorporated the contours of South Bend’s Saint Joseph River into a proposed color scheme to orient visitors and direct traffic.

Such tasks are important, but clinical leaders focused on staffing, protocol development and rotations can’t make them a top priority, says Kathy Nania ’96MSA, Memorial’s executive director for women’s and children’s services. “Most of Fernando’s time has been taken up by planning for some renovations to the parent rooms, something that has been sorely needed,” she says.

That project emerged after a meeting with a couple who had stayed in one of the rooms for more than a week when their child was transferred in from another hospital. The infant didn’t survive. Carvalho attended the meeting soon after joining the staff and listened as the grief-stricken parents expressed their gratitude to Wagle and Nania for the hospital’s efforts and offered insights about their experience as a way to give back.

As the project drew to a close around Thanksgiving, Carvalho made a difficult announcement. Family matters beckoned him home, possibly for good. His alma mater, the Pontifical Catholic University of Rio de Janeiro, had offered him a position on its design faculty. He would return to Brazil at Christmastime.

Nania and Wagle agree that keeping ties with him is a top professional and personal priority, particularly as they eyeball plans for the future hospital. “He would be very, very busy,” Nania says.

For Wagle, the Brazilian designer is a “wonderful” example of a multifaceted relationship with Notre Dame that represents an essential component of successful, 21st century healthcare: Clinical care and customer service cannot improve without innovation. “Unless we’re able to see the work that we do or imagine work that we don’t yet know how to do in new ways, we won’t survive. Memorial has been preaching that for quite some time. The good news is, we have this great partner just up the street from us that understands that.”