A discovery by Mason Roberts ’13, the School of Architecture’s valedictorian, is reopening an old debate over what historians have long considered the original appearance of a temple in the Roman Forum. The key to his surprising finding is a combination of new, high-resolution scanning technology and good old-fashioned principles of classical architecture.

For centuries the Roman Forum was the epicenter of public life in the ancient world, teeming with citizens attending celebrations and orations, conducting business, prosecuting criminals, exhorting gladiators. It also became a place to commemorate great men. 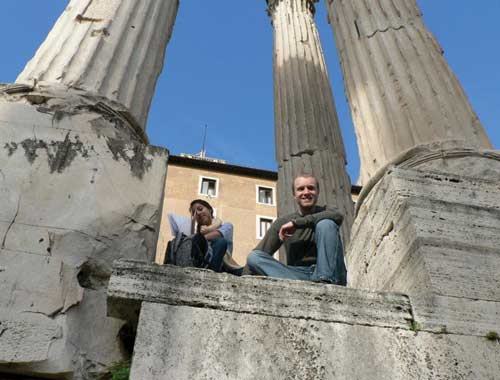 One such shrine is the Temple of Vespasian and Titus, a memorial to the Roman emperors who ruled from 69 to 81 A.D. Begun just after Vespasian’s death during the reign of his son, Titus, the temple is believed by all to have had a portico six columns wide. Little more than three Corinthian columns, excavated and restored in 1811, stands today.

Most architectural historians believed that research during the 1980s had produced renderings that captured the original appearance of the whole temple most precisely. But when Roberts compared those drawings with the three-dimensional images that he and others on the school’s Digital Historical Architectural Research and Material Analysis (DHARMA) team had produced using laser scans of the temple’s foundation, columns and entablature, he saw that they didn’t line up.

He showed the discrepancy to Krupali Krusche, associate professor of architecture and DHARMA’s leader, wondering if his measurements were wrong. In fact, Krusche believes, the 3-D digital images are more precise than those formerly authoritative renderings.

The DHARMA team works with a high-speed, long-range scanner called the Leica 3-D, which helps the team — among the first to use the technology in 2008 — visualize the appearance of structures with exceptional precision. In this case, the scans revealed that the base supporting the temple is wider than previously thought. According to Roman architectural prescriptions, the larger base indicates a wider spacing between the temple’s center columns, which have not survived. Instead, the DHARMA team projects a column-spacing for Vespasian and Titus similar to the nearby temple of Antoninus and Faustina, which was built a century later.

Krusche says Roberts’ first insight led to another during DHARMA’s work on the site last December: Back in 1811, the columns were not properly aligned with the remaining fragment of the entablature they support. This summer, Krusche traveled to Rome and continued her work to verify how much of the reconstruction is accurate.

Roberts credits his own sharper vision to the Notre Dame curriculum’s rare emphasis upon the principles of Greek and Roman architecture, which, he says, instilled in him a working knowledge of the “visual refinement that was very common of temples of that era.” When used along with the technology now available to students, he says, it’s like having an architectural time machine that enables the thrill of discovery.

Krusche says the combination of these new and old ways of seeing equips students with “a holistic understanding of monuments of the past.

“Mason, through his abilities as an architect and a researcher, broke a widely held perception and,” she says, “came to a different conclusion.”

Roberts’ discovery will be on display at an exhibition Krusche is curating to be held at the forum from April through October 2014. “The Past and Present of the Roman Forum” will feature DHARMA-captured 3-D scans of the forum’s temples and shrines, in addition to students’ watercolors. The exhibition will include touch screens illustrating how the ancient sites have evolved over time.

Related projects help preserve the structural and cultural integrity of the Roman Forum and other World Heritage sites, including the Taj Mahal, one of the first locations the group studied. Combining 3-D documentation with meticulous hand measurements, the students create blueprints that would not otherwise exist for these ancient structures. If the landmarks were ever destroyed, this information would be essential to their reconstruction.

The technology also has the potential to keep such a catastrophe from happening in the first place, identifying areas of deterioration and allowing for repairs and the prevention of further damage.

The DHARMA team’s work has already opened doors. In April the School of Architecture signed a four-year agreement with the United Nations Educational, Scientific and Cultural Organization (UNESCO) that allows University researchers to bypass the arduous application process for access to World Heritage sites.