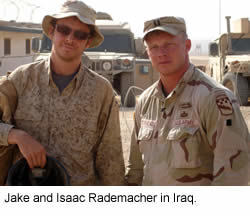 Notre Dame alums who returned to campus for reunion this spring got a special screening of a rough cut portion of Brothers at War, a documentary directed by Jake Rademacher ’97. The film depicts the journey of a young filmmaker who immerses himself in one Iraqi and three U.S. combat units.

The director says the purpose of his mission was twofold: to better understand why two of his brothers—Isaac, a captain, and Joe, a sergeant—chose to serve multiple tours of duty and to learn what soldiers face while fighting the war in Iraq. Rademacher says he also wanted a firsthand view of U.S. troops’ accomplishments. His brother Isaac, after returning from his second deployment, had told Jake about how the troops in the 82nd Airborne unit stationed in Fallujah had trained security forces there and helped rebuild 20 schools and 12 health clinics.

Rademacher made two visits to Iraq. With military approval to film, he lived in the barracks and accompanied Isaac’s unit on their five-day missions. During filming, the soldiers talked candidly about their lives, all the while working to resurrect a war-torn land and its people.

“I felt like I was going to be in danger the moment the plane set down in Kuwait,” Rademacher says. He did at times have to dodge bullets, and once an IED, improvised explosive device, detonated on the road in front of him. He also saw the civil support taking place.

Rademacher, who returned home to Los Angeles after the filming, says the experience gave him new insights into war, family and, ultimately, his own character. He hoepd to release the film this autumn. For more information go to brothersatwarmovie.com.