It doesn’t feel the same. I walk past my dorm or the buildings in which I took my most memorable classes, and I have no reason to go inside. If I eat lunch at the dining hall, my friends are nowhere to be found, replaced by unfamiliar faces that seem too young to be in our places. 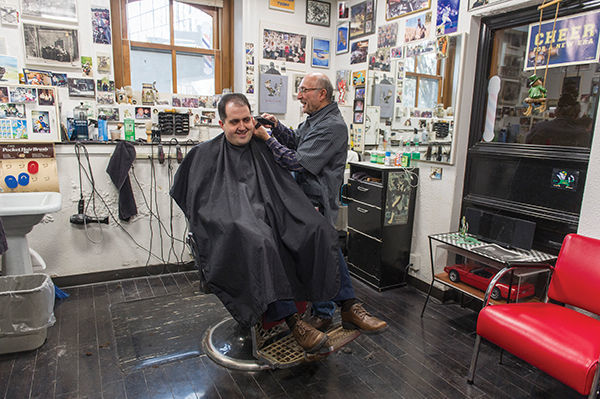 This campus belongs to its students, and as a former Notre Dame student and current staff member, I sometimes feel like I’m walking through my childhood home, observing new residents enjoy what was once my personal space.

Yet one spot does feel the same. It’s a tiny room in the basement of LaFortune Hall where, every few months, I am greeted by a man with a warm smile and an unforgettable name.

Frank Franco is my barber. He cut my hair for four years through college. He hasn’t changed much, and neither has his one-chair shop. The walls are still lined with pictures of campus and past football glories, and the calendar book and No. 2 pencil remain out on the table for customers to sign up for an appointment. The only thing that seems different is the thinning hair on my head and the streaks of gray on my temples.

We didn’t talk all that much when I was a student. Frank sets appointments for every 15 minutes, so he gets you in and out quickly. Now we chat throughout each visit, and I’ve gotten to know him and the circuitous path that led him to the basement of LaFortune.

Growing up, Frank swept the floors at Franco’s Barbershop in Alliance, Ohio. His father, also named Frank, ran the place. After the younger Frank graduated from high school, his dad convinced him to put off college and attend a nine-month barber school.

“He didn’t want me to be a barber,” Frank explains. “He wanted me to use barbering to get through school to do something more worthwhile.”

With his barber skills sharpened, Frank enrolled at Kent State. He studied business administration, cutting hair in the afternoons to pay his tuition. “It took me seven years, but I graduated,” he chuckles.

He finished school in 1967 and was drafted into the Army. At Fort Lewis, near Tacoma, Washington, he clerked in a station that oversaw the shipment of troops to and from Vietnam.

Once he realized he wasn’t going to be deployed overseas, he married Darla, whom he had met several years earlier in Ohio. He got out of the Army in 1969 and set out to start his new career.

Over the next 18 years, he worked as a purchasing agent and project manager for several manufacturing companies. New opportunities took Frank, Darla and their three sons on a tour of the Rust Belt; they eventually landed in South Bend, Indiana. But in 1989 Frank became one of the many casualties of the collapse of the manufacturing industry across the region. Over the next few years he could find only temporary work, and by 1992 his family had lost their home, and his oldest son was about to start college.

Lying in bed one night, Frank heard a voice. It reminded him, in less than polite terms, that he used to cut hair on a college campus and now lived a mile from one of the most famous universities in the country. He should go to Notre Dame and offer to cut hair, the voice said.

Frank acknowledges that this story sounds far-fetched. Still, the next morning he headed to Notre Dame in search of a job. He was told the school already had a barber — Joe D’Angelo, affectionately known on campus as ROTC Joe. Frank visited the LaFortune barbershop, and D’Angelo shared his secret: He was planning to retire. In June 1992, more than 30 years after he finished barber school, Frank Franco succeeded ROTC Joe as Notre Dame’s on-campus barber.

“I’ve always heard that Notre Dame kind of calls its people,” Frank says. “And there it was.”

As a barber, Frank is efficient and old-fashioned, not eager to help a customer find his new look. His definition of a haircut: “As is, but shorter; exactly as it is, but shorter.”

The pictures on the walls reveal his passions — his family, popes, the motorcycles he used to ride, Notre Dame. The amateur photographer has shot hundreds of photos of campus. “My wife asks me, ‘How many different pictures do you need of the Dome?’” he says. “Well, the Dome looks different every day — according to the lighting, according to the season.”

His business is mostly students, and he’s had some notable regulars. He claims to be the architect of the memorable flattop belonging to former star fullback Marc Edwards ’97. Staff members and Holy Cross priests come, too. I arrived early one afternoon last year to find Father Edward A. “Monk” Malloy, CSC, in the chair, chatting with Frank like old friends.

Monk’s predecessor as president also went to Frank. Father Theodore Hesburgh, CSC, would ask the barber about his most recent motorcycle trip, where he rode and how fast. Last year, when Father Ted died, Frank got a surprising call. He was on a list of the legendary priest’s close friends and was invited to all of the week’s events. He was astounded and touched by the gesture.

Cutting hair was supposed to be a means to an end, but Frank has now spent more time working as a barber than he did in manufacturing. And he’s glad. He loves working at Notre Dame and says he plans to run the shop “as long as I’m standing, and as long as they don’t kick me out.”

As long as Frank’s still there, I’ll head to the basement of LaFortune every few months for a trim, a chat and a welcome dose of nostalgia.