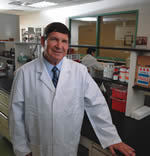 After working in drug discovery and development for more than 20 years, Michael Flavin, Notre Dame class of 1978, is now as much entrepreneur as chemist. He has steered his young company through its initial public sale of stock and is raising tens of millions of dollars to do business in the highly competitive pharmaceutical industry.

These are not skills the 52-year-old envisioned he would need as a chemistry major at Notre Dame or later during his two-year stint as a post-doc fellow at Harvard. “You could learn about the natural biochemical processes and what happens in disease,” he says, “and then you could potentially go in the lab and do something about it. And that was fascinating because the idea was always, you know, can you make a difference?”

Flavin entered the working world at Baxter International, looking into potential new products to treat such problems as acute respiratory distress. In 1987, hoping to continue the work he had done as a Harvard fellow on a potential anti-cancer agent, Flavin received a $50,000 grant from the National Institutes of Health. So he and his wife, Karen, started MediChem Life Sciences.

“It was a career choice that was just opening up to scientists at that time,” he says. “I was quite drawn to it because I felt like it would be a way to make a difference perhaps sooner and maybe with more opportunity than being one person in a company with 30,000 employees.”

With the seed money, Flavin rented space at Chicago Technology Park, which had been created to spawn new biotechnology businesses. He leased the equipment he needed to get his new company off the ground.

When the grant funding expired, MediChem worked under contract on early-stage drug discovery and development projects for larger pharmaceutical and biotechnology companies. Over 14 years MediChem grew to about 240 employees. The firm conducted more than 500 projects, working on cancer, inflammation and anti-infective drug candidates for about 90 firms.

“I would say one out of 100 initial candidates that look kind of good at a test-tube level ultimately make it to be new drugs,” he says. “Six to seven of the early-stage drug candidates we worked on at MediChem ultimately made it to the market.”

Flavin left the company in 2002 after it was acquired by an Iceland-based company in an $84 million all-stock transaction. “At MediChem we were able to work on so many projects simultaneously because we had a lot more people,” Flavin says. “We were being paid by the companies to do this work. We were not investing our own funds.”

That isn’t the case with Flavin’s other venture—Advanced Life Sciences, a biopharmaceutical company in Woodridge, Illinois, that he split off from MediChem in 1999. “Here, we have about 35 people. We’re not being paid by any company to do this. We’ve raised the money in the capital markets through investors who believe that some of the products that we have in development can be successful.”

Finding a niche
“As a smaller company, you’ve got to find places where you have a competitive advantage, and infectious disease is one of them,” Flavin says. “To try to come up with another cholesterol-lowering drug—why? That’s covered by big pharma. So you have to pick your battlefields.”

Advanced Life Sciences is running tests on about seven drug candidates. Its lead antibiotic is cethromycin, proposed for use in respiratory infections such as pneumonia. That antibiotic is also a case study in pharmaceutical finances.

In 2004 the company acquired the rights to cethromycin from Abbott Laboratories, which had done 50 clinical trials on it. By completing a $35 million initial public offering in August 2005 and raising an additional $56 million by late 2007, Flavin’s company could afford to continue the tests. Its new drug application ideally will reach the U.S. Food and Drug Administration this year.

Two Phase III clinical trials on cethromycin cost about $40 million. “Things get very expensive at that stage of development, whereas in pre-clinical development a program might cost $5 million. As you go along the amount of money needed is escalating.” But if successful, Flavin says, a drug like cethromycin could bring in as much as $500 million a year in revenues.

Each venture, though, is a huge gamble. If Phase III trials do not prove successful, he says, “Your program is over. And it doesn’t matter how long you worked or how hard it was and how many dollars were invested. I mean, that’s it.”

Once federal regulators receive the new drug application for cethromycin, it could take 10 to 12 months for review. If approved for commercialization, Advanced Life Sciences will need additional resources to manufacture and market the drug, and Flavin hopes his company will partner with larger companies on marketing and sales.

“There’s a dearth of new antibiotics, and pathogens continue to evolve to get around the existing treatments. And so our nearest-term contribution is potentially a weapon for that,” Flavin says, echoing the goals of his early years as a chemist. “Maybe we’re fortunate enough to have this drug be approved and out on the market and helping people. I say that’s a good thing.”

Emily Dagostino is a freelance writer who lives in the Chicago area.