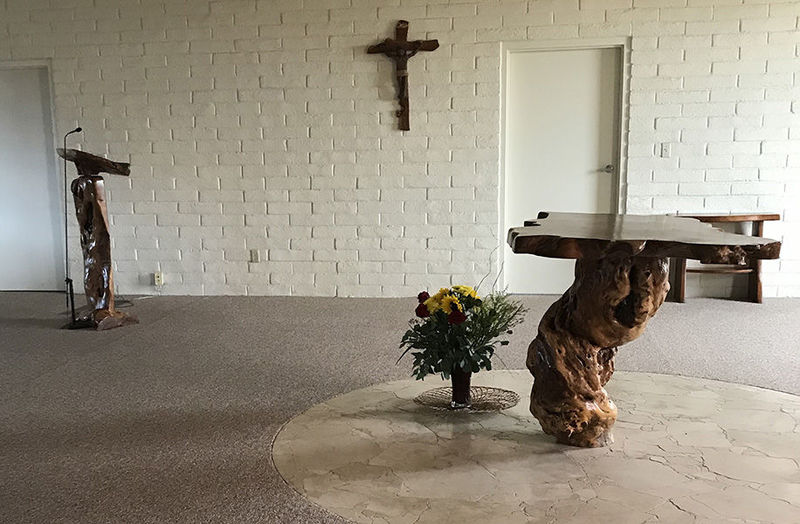 The sixth leg of my fall semester sabbatical has taken me to Santa Rita Abbey in Sonoita, Arizona (population 818). Santa Rita is a Cistercian abbey with 11 nuns, more commonly known as Trappistine nuns. Santa Rita Abbey, an hour southeast of Tucson, was founded in 1972 in the high desert at the foothills of the Santa Rita mountains. The abbey property butts up against a national forest. There are acres and acres for walking. All the roads are unpaved. If you entered “geographical end of the world” in your GPS, Sonoita will come up. Just kidding!  The two nearest towns are Elgin (population 161), eight miles to the east and Patagonia, 17 miles to the south (population 880).

I am spending three weeks of silence and solitude, prayer and quiet, reading and writing, taking longs walks and even longer naps. I love naps. I often think that I am a relatively healthy priest because when I was in the seminary I took lots of naps during my canon law classes!

I celebrate Mass with the sisters each morning at 7:25 a.m. And by 8 a.m., I’m “done” for the day. Almost the rest of the day is spent in silence and solitude. It is lovely. I’ll join the sisters in the chapel for vespers and compline each day, but there is no conversation, only silent praise of God. Getting up early and praying reminds me why prayer in the early morning has always been a privileged time to be with God. Of course, God is present all the time at every moment. But there’s something beautiful about the early morning, before the sun rises . . .

On some days I’ll drive into Sonoita, about five miles from the abbey. I’ll go to the grocery mart and buy bananas and apples, or mostly cookies and candy! I’ll say a few words to the clerk, but no real conversation. Highways 82 and 83 intersect in Sonoita and almost everything — bank, post office, gas station, mini mart, Dollar General — is on one of the four corners. Until two years ago, Mass was celebrated every Saturday evening in the fire station in Sonoita. I’m not sure why it was the fire station. Maybe it had something to do with scaring people about going to the fires of hell! Now there is a small chapel.

Other days I’ll drive to Patagonia. There is a fitness center there with all sorts of aerobic equipment. But again, no real conversation. For one thing, I’m huffing and puffing from exercising so that I can barely talk anyway. And all I’m thinking about is that egg roll and cookie or two chicken thighs and a cookie from the mini mart that I will reward myself with once I finish working out.

The scenery is beautiful for miles around and sometimes I just enjoy going for a drive. God’s creation is beyond beautiful, beyond what we ever could have imagined. If cows and horses were people the population of Sonoita and Patagonia would be in the tens of thousands! There are animals all around the abbey. One day as I was driving I saw a skunk the size of a dog. On another day from the kitchen window I saw a bobcat. At the fitness center in Patagonia, the owner asked me if I had had my rabies shot in case I was attacked by a bobcat. Bobcats never come near a human being unless they are infected with rabies. Then they are relentless in their pursuit of humans. She also reminded me that the snakes have not yet hibernated for the winter. And one morning after Mass another retreatant asked me if I had seen or heard the mountain lion the night before. Yikes! But then I think that these creatures have long inhabited the desert before human beings ever lived there.

On many occasions while walking from the guest house to the monastery chapel, about 100 yards, I see deer running and leaping. There is something about seeing deer that touches the soul. I always think of Psalm 42 that prays “as the deer that longs for running streams, so my soul yearns for you my God . . . ”

We always have to be doing something or looking at something on our phones. Here at the abbey, there is a fleeting internet connection. If you look at your smartphone here the most common two words are “No Service.” I must admit, as someone who is addicted to looking at my email on my smart phone, that it is so freeing to not use the phone here.

God loves us in the concrete dimensions of our lives. And nothing helps us to know this like silence does. Silence is not daydreaming. It is an effortless intention to be with God, to simply rest in God, to know the nearness and closeness of God, the indwelling of God.

Silence opens up so much. As you drive onto the abbey property there is a sign that says “NO OUTLET.” While true road-wise, at a deeper level nothing could be further from the truth. The abbey is an outlet into the vastness and silence of God, which is an openness to the real self, the self created and loved by God. We certainly come to know the love of God made known to us through family and friends. But that love is not all there is. God makes his love known to us through silence and solitude.

Every great world religion has a place for silence in its self-understanding and practice. Every holy person I know has a practice of silence. Nothing can take the place of silence in our lives. Since silence is God’s first language and is more easily heard in solitude I am especially grateful to God for Santa Rita Abbey and the nuns here who welcome anyone wanting to share in their silence and solitude. Their warmth and hospitality, their humanness and way of being in the world is a tremendous gift and blessing to all seekers who arrive.

By their silence and solitude, by their prayer and welcome, they have created a space where all who come can rest in God.

Fr. Joe Corpora, C.S.C., on sabbatical for the Fall 2019 semester, has renamed his regular “Being Mercy” column “Doing Mercy” as he chronicles his experiences around the world during his active leave from campus.