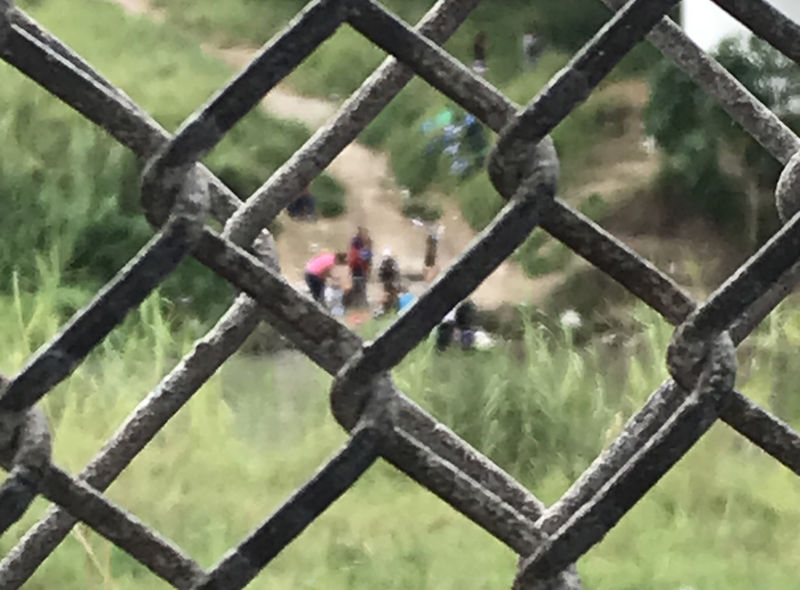 During the 2018 Christmas vacation, I spent a week working at the Humanitarian Respite Center in McAllen, Texas, a ministry of Catholic Charities of the Diocese of Brownsville. The center was founded by Sister Norma Pimentel, MJ, who received the 2018 Laetare Medal, Notre Dame’s highest honor.

After one week working at the center, I knew that I would return as part of my fall sabbatical. And so I did. Many things have happened since I was there at Christmas 2018.

Because of complaints from neighbors, the center was forced to find a new location. They found one, and as God would have it, with space for many more people in a much better location one block away from the McAllen bus station.

The center moved in July 2019. Because of the new location’s larger size, the number of refugees that Border Patrol dropped off each day doubled to between 800 and 1,000. Two of our CSC seminarians worked there for the summer.

I arrived for my sabbatical visit on October 8. As at Christmas time, I was welcomed back to the Rectory at the Basilica of Our Lady of San Juan del Valle. I would be assigned several hours of confession and one Mass each day. I would work at the center for four to six hours each day.

I was prepared to go to the center to start my volunteer work on October 9. I showed up and, to my huge surprise, there were not 1,000 people there. Rather, there were four — a mom, a dad and two children — from El Salvador. This decline in numbers happened six weeks ago and it happened overnight.

Why? I learned that this is a result of the Trump administration’s Migrant Protection Protocols, also know as the “Remain in Mexico” policy. The center went from welcoming 1,000 refugees a day to fewer than 10. The center is still open, waiting for this policy to be struck down. 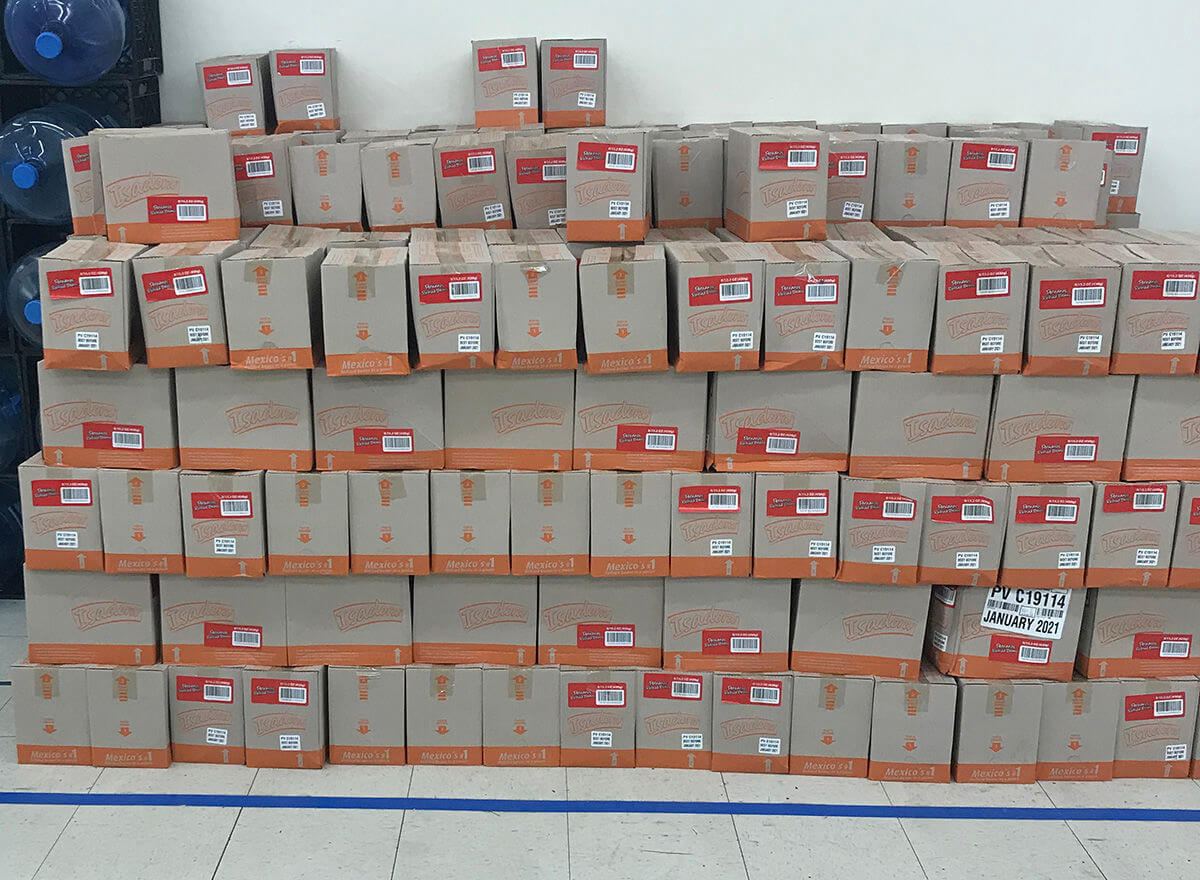 On my first day at the center, I spent time talking with the family from El Salvador, mom and dad, and two children, ages 14 and 5. I fell in love with them. They had arrived that day and would be going to Columbus, Ohio later in the day. We had lunch and visited. Like almost all refugees, they were fleeing violence in their homeland. They were asking for asylum in the United States.

While we were eating, a truck arrived with cans of donated frijoles. I have no idea of how many cans there were. There were 325 boxes of cans, enough beans to give gas to half of Texas. So this wonderful family and I unloaded and stacked all the cans of beans. We talked and visited. Even the little 5-year-old guy, Diego, helped to carry boxes of beans.

Diego is a bright little boy, every bit as bright as the average kindergartener entering school in a Chicago suburb. They will have vastly different futures for sure.

As we were stacking the boxes, the dad didn’t want to put a box in a spot that would have killed a cockroach. They are the kind of family that President Trump insists on calling rapists, criminals and murderers. Completely fake news. You would have to look far and wide to find a more gracious and polite and kind family.

So where are the refugees? The White House says 51,000 asylum seekers have been turned away under the policy. Many of them are “living” at the Mexico-US border on the streets of Matamoros, Tamaulipas, waiting for a court date to enter the United States. They are without access to water or food or clothing or any kind of sanitary services. They are bathing in the Rio Grande. They are sleeping outside. They are eating whatever they can find.

When they are given a court date, they cross the bridge and go into a room where there is judge on a television screen. The judge hears their case and 99 percent of the time denies their request for asylum or they are given a new court date in four months.

On my second day, four of us from Catholic Charities drove about an hour from McAllen to Brownsville. We parked in a garage and walked across the bridge to Matamoros. We brought blankets for the refugees there because the weather predicted a cold front.

I will never forget what I saw when I crossed the border. Hundreds, perhaps thousands, of families in pup tents. I couldn’t believe it. Everywhere I looked I saw people and pup tents. As I walked by I would look in a pup tent and there would be a family of five or six squashed into the tent. And so many babies and infants. I wept. It’s a sight that I will never forget. Toddlers running around everywhere with diapers and no shoes. Mothers breastfeeding babies. People just hanging out, waiting. 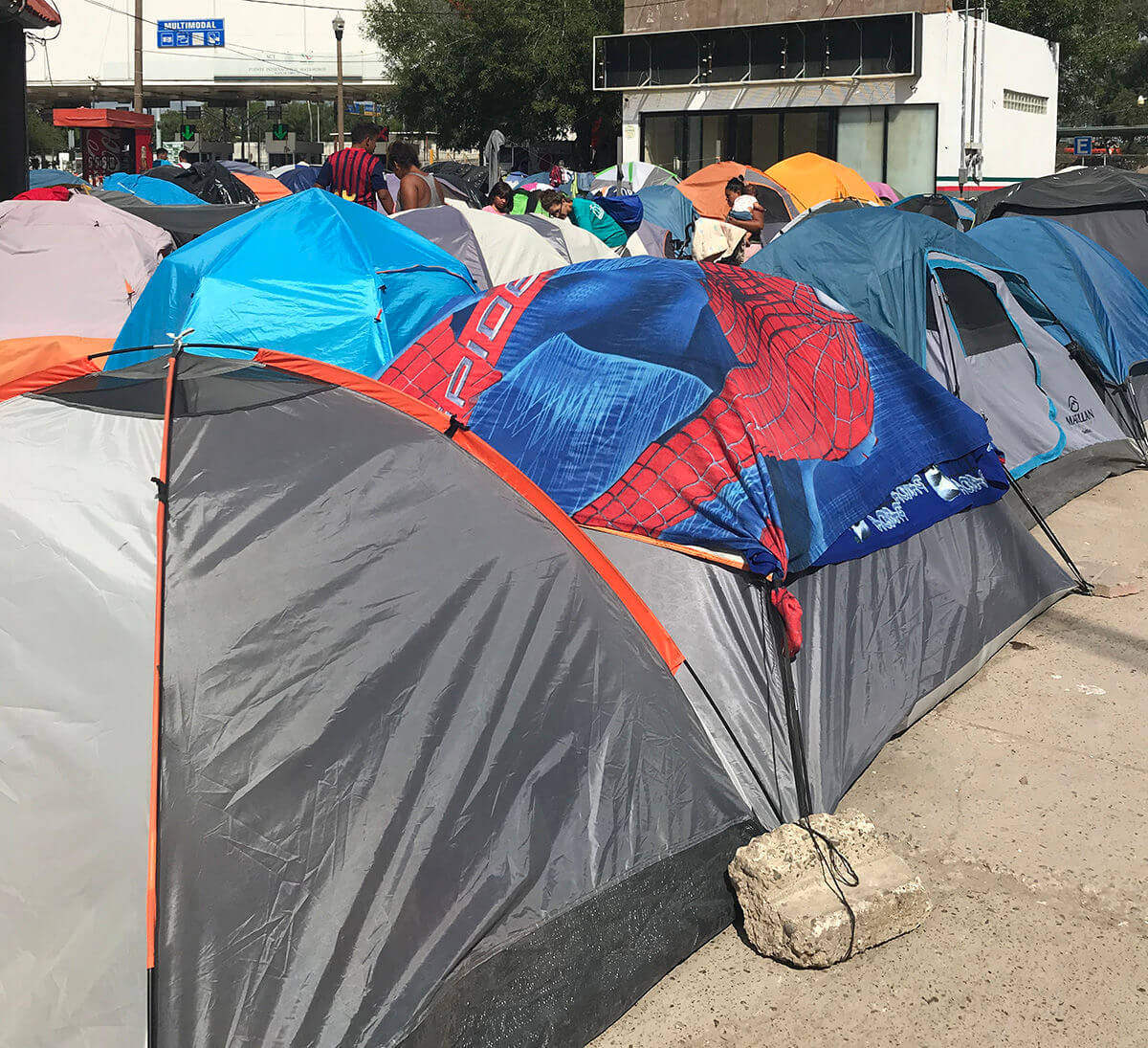 Here’s the story. Prior to the “Remain in Mexico” policy, when people crossed without papers, they would claim asylum and would be given a court date in the city where they were going. Example: a family crossed without papers, they were arrested, they asked for asylum and gave the name of a family member living in Maryland. Border Patrol made contact with the family in Maryland, who said that they would take responsibility for this newly arrived family. Then Border Patrol would take them to Sister Norma’s Humanitarian Respite Center. They would stay there a day or two until the family member in Maryland paid their bus fare. Once they got to Maryland they would go to court on the appointed date. But since the caseload is backlogged by more than a million, they would be given another date and then another date. By the time their case would be heard they might already be living in Maryland for two or three years. By then they were part of the underground undocumented community. If they ever did go to court, they would rarely be given asylum. Only 5 to 10 percent of those asking for asylum receive it. But, in a sense, that did not matter because the family had already integrated into the undocumented community, with the adults working jobs and children in school in the cities where they had lived while awaiting their court date.

“Remain in Mexico” keeps people from entering in the first place. So unlike those who entered just two months ago and “got lost” in the system and stayed in the U.S., the people at the border now will most likely never get in and will be forced to return to the violence and poverty of their homeland that they are trying to flee.

When we crossed back into the United States, the customs officer asked me, “Are you bringing anything back from Mexico?” I said, “Yes, I am. Sadness and horror.” She looked at me and said, “Well, we have that in the U.S. also.” Maybe she was bothered by my MAKE AMERICA MEXICO AGAIN hat.

Recently, the world learned the story of five elephants that drowned in a waterfall in Thailand trying to help a baby elephant that had fallen. Even animals treat each other better than human beings do. I look at the situation of so much suffering at the border and I ask, “How can human beings do this to other human beings?” There are no words to describe the horror. The complete lack of respect for human life is appalling.

On Sunday, seven of us from Catholic Charities of the Rio Grande Valley crossed the border again to bring wagonloads of food and drink and other items to the refugees — things like peanut butter and jelly sandwiches, water, milk, beans, goldfish crackers, soap, toothpaste.

It costs $1 to cross the bridge from Brownsville into Mexico on foot. We walk to where the pup tents are housing so many refugee families and children. We line up the wagons in a row. The first wagon has bags in it. The people get in a line and each person gets a bag. Then, as they walk along the wagons, we each put our item in their bag.

Constant gracias, gracias, gracias from the refugees passing along the line. Almost every woman has a baby in her arms and almost every man has a 2- or 3-year-old in his arms. I shake each hand, ask each child’s name and then put in a baggie with soap, toothpaste, a toothbrush, socks and some other hygiene items.

I am struck by their kindness, their smiles, their gratitude. Almost every person is so thankful for the few items that we put in their bags. We who have so much — too much — have a lot to learn from the poor about gratitude. Borrowing from this Sunday’s Gospel, these refugee families are the one out of 10 who came back to give thanks to Jesus.

After we finish we walk back across the bridge to the United States. I look down in the river and I can see people bathing themselves in the muddy water of the Rio Grande River and washing their clothing. I am moved to tears.

It is so hard to see people suffering so much when it doesn’t have to be this way.

May God have mercy on our indifference and move us to action.

Fr. Joe Corpora, C.S.C., on sabbatical for the Fall 2019 semester, has renamed his regular “Being Mercy” column “Doing Mercy” as he chronicles his experiences around the world during his active leave from campus.