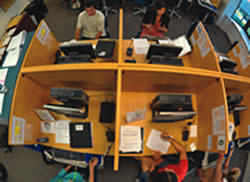 Over the last four years, Kevin Gaffney ’09 spent the lion’s share of his evenings in a crowded, noisy, third-floor room in Grace Hall where students sit in carrels and telephone alumni, parents and friends of the University to ask for money. For the first two years he was on the phones himself; for the past two he managed a roomful of student callers.

Gaffney’s raised a lot of money — he estimates his personal total at $50,000 — for a variety of important campus needs. He also lived through crises both routine (bad football seasons, talking to parents whose children were denied admission) and unusual (President Barack Obama’s commencement visit).

When he started college, Gaffney never imagined himself as a telemarketer, much less a good one, but as the political science/sociology graduate headed off to Notre Dame Law School this fall he felt lucky to have had the experience. “The job is one of the most impressive things I have on my resume,” he said. Most satisfying were the communication skills he gained, “not only on the phones but as a manager in the room where 20 people are working at the same time, all talking on phones in very close quarters.”

Each Monday through Thursday of the school year, two evening shifts of carefully selected and extensively trained students can be found working in the development phone center. They face computer screens and wear telephone headsets. Their computers are preloaded with the night’s target group of potential givers, drawn from one of three categories: loyal donors (those who have given for several years running), occasional donors and non-donors.

The computer automatically dials each prospect and puts relevant information up on the screen, including giving history, relationship to the University and a suggested “ask level.” A script is at hand to start the encounter. By the time an average evening ends, each calling station ordinarily produces $2,000 to $3,000, and often a lot more.

The phone center turned 25 this year, and Michael Brach ’88, who oversees the operation, calls it “critical to what we do” in development work. Each year, he says, the center brings in about $2 million in pledges and gifts from around 10,000 people. This fall the stakes went up as the University swung into the national (read: public) phase of its $1.5 billion Spirit of Notre Dame campaign. Although the overall campaign goal was reached last summer, many sub-goals remain underfunded

When it’s finally over in two more years, the development staff hopes to have raised another $100 million, and much of that will come from student calls.

These students are anything but a random collection of undergraduates. Applicants for the job have to go through a process that consists of a phone interview (to test the students’ phone presence) a face-to-face interview, a three- to four-hour training session, and a series of mock calls that serve as the candidates’ final exams. Even after that, a few students each year find the real thing too unsettling, and they drop out.

“The caller experience,” Gaffney recalls, “was really hard at first. I contemplated looking for another job. I had poor communication skills, and I had trouble when the conversation started going outside the script. I felt on the spot as a representative for things I really didn’t know about. Any frustration people might be feeling came right through to me. Sometimes you want to scream out, ‘I’m just a student, I want to get out of here.’”

In time, most students learn to take it all in stride, and Gaffney was one of those. “Soon you start to hit a groove,” he says, though “soon” meant two months for him. Brach confirms that most students manage to reach a comfort point. Part of the learning curve is distinguishing between being pushy and “politely assertive,” to use a Brach phrase that makes the students smile. “We rarely get a complaint,” says Brach, and the attrition rate is low for both callers and student managers.

The phone center did not enjoy an auspicious start. Daniel Reagan ’76 was director of Notre Dame’s annual fund in 1984-85 and was given the task of testing out a phone component of what was then a direct mail-driven operation. “I borrowed a classroom in the Main Building that had some phone jacks and found 15 phones I could plug in. I went to the dorms and asked rectors to send me some volunteers.”

The first night 15 or so students from Grace Hall showed up, underwent an hour of crude training and began making calls. The result was devastating — a handful of very small gifts and a disgruntled bunch of callers.

The next day Reagan learned something he didn’t know — the “volunteers” were, in reality, dorm offenders who were given the assignment as punishment. “The next night,” Reagan says, “we had a group of true volunteers from another dorm, and they raised a couple thousand dollars.” That quickly, the phone center became what Reagan now calls “an integral part” of Notre Dame’s fundraising picture.

That’s especially true in the public phase of major campaigns, he says, when students “blanket the country” with calls. In one earlier campaign, a student received a phone commitment of $50,000 from an alumnus who had been thinking of creating a scholarship. The phone center erupted at the news. “Talk about wild celebration,” says Reagan. The gift wasn’t truly a spur-of-the moment reaction to an eloquent caller, however. Solicitation calls during campaigns are preceded by one or two letters alerting the recipients to the coming calls.

From that toes-in-the-water start in ’85, the University has moved to a mix of communication techniques that rely on email, direct mail, video, the Internet and telemarketing. And the phone center has become high-tech.

Not everyone is happy to receive a call, Reagan concedes. “Telemarketing is what it is, and most people would rather do without it. But people are receptive to a call from their alma mater, and in particular from a student. If someone doesn’t want to be called, he’ll be coded in our system in a way that prevents future calls.”

Kevin Gaffney found that most of the people on the other end of his telephone “wanted to talk to me, and they talked about everything — the football team, what it was like when they were in school, what room they lived in, who lived on the same floor. My longest conversation was 45 minutes. When I mentioned Grace, he said he had lived in Grace but didn’t realize it was no longer a dorm. He went on and on about his time on campus, and he asked me about my experience compared to his. It was really fun.”

In addition to something useful for their job resumes, phone center students enjoy a more immediate benefit — they are paid, starting above minimum wage and going up as they progress. The income is usually part of their student-aid package. “These jobs are among the better paying jobs on campus,” says Mike Brach.

The center employs some 80 student callers and 10 or so student managers in the course of a year. Their demographics are reminiscent of the overall campus profile: lots of arts-and-letters and business students, a sprinkling of science and engineering majors. Freshmen are a bit underrepresented, although Gaffney started his calling career just days after arriving on campus. He was on his way to apply for a dining hall job when a sophomore friend told him about the phone center. He immediately decided against a food service career.

Keeping callers focused and motivated over an intense two-hour shift is a challenge. One antidote is a “mandatory fun break” halfway through each session. The callers hang up the phone, get out of their chairs and talk about any issues they’ve just encountered. Depending on weather, they might go outside for a wiffle ball home-run derby or a scavenger hunt; or they might stay in the building for some hide-and-seek — “any silly or weird stuff,” says Gaffney, one of whose jobs as student manager was to think up new mandatory-fun activities. “The idea was to get their minds off the phones or just to stand up and do something different.”

That’s when the night’s funny or odd stories are shared. Like the night Gaffney, who was coming off a long call, didn’t quite focus on the computer screen when it dialed his next number. When a man answered, he started his script: “Hello, “Hello, this is Kevin Gaffney calling from the University of Notre Dame. May I please speak with …”

Suddenly the name on the screen came into focus. “Dad!?” he yipped.

He didn’t get a pledge from his amused father. “He shut me down,” Gaffney says, laughing, but his dad later sent in a mail pledge.