He’s no science-fiction fan, but back in April Notre Dame astrophysicist Justin Crepp and a team of NASA researchers made a discovery sure to delight E.T. lovers and Isaac Asimov enthusiasts the world over: the first confirmed Earth-like planets in the habitable zone of a sun-like star.

In plain English, when they produced images of the environment immediately surrounding the star, Kepler-62, and its planets, Crepp and other scientists working with NASA’s Kepler Mission discovered the closest likeness to Earth that Earth has ever seen. 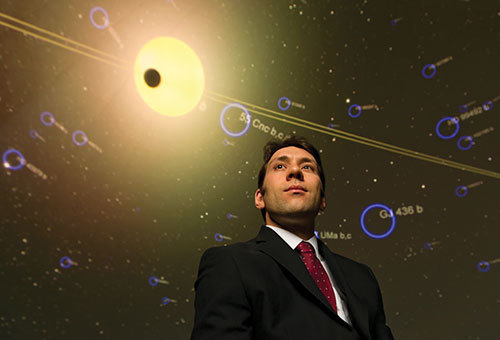 “Kepler-62 was exciting because it [is] the most similar system that we have to our solar system, in that there were multiple planets, the star was comparable in mass and radius to the sun . . . and two of the planets were in the habitable zone.

“It was the first unambiguous demonstration that there is something in the habitable zone around a solar-type star,” says Crepp, ND’s Freimann Assistant Professor of Physics.

NASA’s Kepler Mission launched its telescope in 2009 with the goal of detecting terrestrial planets orbiting other stars. For four years the telescope monitored an area of space that contained more than 100,000 stars, recording disturbances in their brightness that could possibly be planets in orbit. The telescope’s position in space, says Crepp, allowed for a much clearer view of the stars than the best ground-based telescopes, since Earth’s atmosphere can diminish a telescope’s ability to pick up these events.

By analyzing the patterns of these disturbances, which Crepp likens to watching for shadows, scientists can label certain patterns as “KOIs,” Kepler objects of interest. The problem with the KOIs, however, is that the signal could also be produced by astrophysical effects unrelated to planets, such as binary stars that periodically eclipse one another or brightness fluctuations in the star itself.

Crepp studied the KOIs to determine whether they were planets or red herrings. Kepler’s raw images are generally too blurry to support definitive judgments, he says, so he used adaptive optics to eliminate errors and blurriness caused by turbulence in the atmosphere.

Crepp says his long-term goal is to produce direct images of such planets that would offer further details, like their chemical composition — whether they have water, for instance — instead of relying upon brightness analysis alone. For now, the goal is unattainable because the cost to develop the required technology is too great.

For all the talk about Earth-like planets and futuristic technology — coupled with unfair stereotypes that may be associated with professors of astrophysics — it may come as a surprise that Crepp is not much of a science-fiction fan. His inspiration for studying the stars comes not from Star Trek but from an influential teacher.

“I wasn’t [a sci-fi fan] quite as much as my friends and colleagues were. I don’t even know if I was ever an amateur astronomer. I just sort of skipped the constellations,” he says. As a Penn State undergraduate studying math and physics, he signed on for summer astronomy research with his mentor, Darren Williams. “[He] got me hooked,” Crepp says.

Williams, an associate professor at Penn State Behrend, studies the origins of the universe, the effects of comets crashing into the Earth and the search for Earth-like planets. Crepp says Williams’ mentorship turned what might have been just a cool summer job into a lifetime pursuit — and now a lasting achievement.

He is not anti-science fiction, however. Crepp admits that he’s become more interested in sci-fi, and for an admirable reason, too: His wife, Amy Slozat-Crepp, is a big fan. He says he enjoys watching CBS’ The Big Bang Theory, since he often recognizes the physics research the writers employ for the show’s characters.

Crepp’s ultimate goal of imaging an Earth-like planet may be distant in the current economic climate, but he is taking smaller steps to bridge the technology gap. Since launching telescopes into space is too expensive to do regularly — the Kepler Mission was in development at NASA for more than 20 years — Crepp says scientists must instead discover better ways to work from the ground. He and his team are working in Notre Dame’s Nieuwland Science Hall on an instrument named iLocater, a device they will deliver to the Large Binocular Telescope in Tucson, Arizona, which he says is the best telescope in the world right now.

The telescope looks at stars much closer to Earth than the ones Kepler surveys. iLocater will work with the telescope to detect tiny Doppler shifts — changes in the frequency of the waves of light emitted from the stars — which will identify planets orbiting in the habitable zone around our nearest neighbors. He expects the device to be ready in 2015.