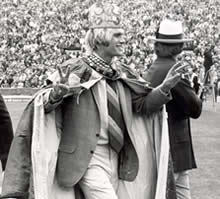 In 1972 it was all about Nixon, The Godfather, Don McLean’s “American Pie,” Monty Python’s Flying Circus, 55-cent gas and the end of the draft. It was the last gasp of the don’t-trust-anyone-over-30 generation. The storm of the ’60s had passed and many college students were wistful for the passion of their predecessors.

It was the perfect opportunity for one Notre Dame lad to stir things up on a campus thirsty for a chance to shake up the status quo.

Kersten’s candidacy that spring was anything but a joke to the 1,300 students who watched him speak from the 4th floor ledge of a Walsh Hall bathroom the night before the election. Donned head to toe in regal attire, Kersten stood between two orange flares, simulating a burning bush, and promised his peers in a dramatic speech to take down the campus poobahs “who have fought us with slander, rumors and a great deal of truth.”

Kersten, who also called himself The Prime Mover and claimed to be immortal, shocked crowds a few hours before the election when he released a statement claiming a vision from God had told him to “get the hell out of the election” and “you have better things to do and must study to get an A to go to med school.” His supporters didn’t budge, and Kersten received 65.7 percent of the vote. The king was in.

Kersten attributed the win to divine intervention and held his own inauguration a few days later. The invitation sent out to students read: “The Coronation and Inaugural Ball of his Divine Majesty will commence at the hour of seven on the steps of the golden tabernacle. The inaugural ball will follow immediately in the main ball room of the LaFortune illiterate rabble center.”

Kersten accepted the throne in front of an audience humming “Pomp and Circumstance.” He wore a velvet robe and a Burger King crown. His vice president, a cat named Uncandidate, purred in his right arm during the ceremony. Chants of “Long live the king!” and “Long live the cat!” could be heard late into the night as a local rock band, The Chapped Lips, played for students drinking un-spiked punch.

Kersten’s oligarchy, which consisted of “myself and my close friends,” filled student government with new and bizarre platforms and wacky contests. At one point Kersten considered raffling off the throne for 25 cents a ticket, but he later decided on a king-for-a-day contest, which allowed one student to make one important decision, feed the vice president and “see the system of checks and unbalanced books.”

Kersten created an office of the provost to “handle all internal and external affairs, verily the whole confused mess,” while he managed matters of his own, such as presenting the flag at football games, escorting Miss America on campus and having the student government secretary type his term papers. Kersten admitted in an interview with The Observer, “I like to put things off, not think about them, then put them off some more.” He later divulged, “Well, my mother really made all the important decisions in my life.”

Students under Kersten’s reign remember most fondly the series of “miracles” he performed around campus to prove his immortality. Father Bill Toohey, the director of campus ministry, expressed an interest in seeing Kersten walk on water. Kersten shot back that he had walked on Saint Mary’s Lake at midnight — and there was photo evidence in the March 17, 1972, Observer to prove it. Toward the end of his reign, Kersten pulled a sword from a stone to prove he was fit to govern another year.

Kersten was, as Assistant Dean Robert Waddick of the College of Arts and Letters said at the time, “a breath of fresh air in a sea of politics.” Professor Edward Cronin said his confidence in the student body had been restored because “Kersten has shown that there is a blessed sense of humor on campus.”

Humorous, he was. But Kersten was also intent on demonstrating his contempt for grim and frivolous student politics on campus. In the fall of his first term Kersten told The Observer, “I had something meaningful to say and the students responded.” The king’s plan all along had been to “satirize the election and then drop out of it,” but it turned out that the students wanted something more. Kersten’s spontaneous campaign snowballed into a two-year interlude to the normally sober student body elections, but he still managed to maintain a 3.9 GPA in pre-med. The king went on to medical school at the University of Iowa and practices ophthalmic plastic and reconstructive surgery in Denver, Colorado.