Notre Dame librarian Father Paul J. Foik, CSC, took to his typewriter in October of 1922 to chastise Father John F. O’Hara, CSC, who would go on to become University president and a cardinal of the Church. “I question . . . the right to destroy without at least an interview with the librarian on the matter in question,” Foik wrote. “I know that no offense was intended to me personally, but I feel that I could not let the matter go without protest.” 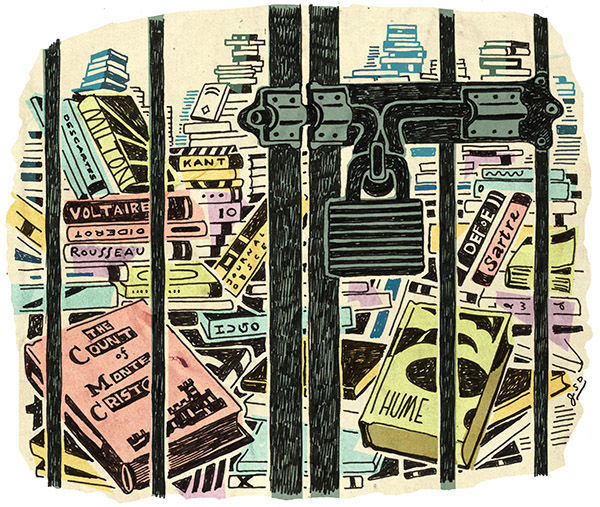 Father O’Hara had prompted Foik’s disapproval when he removed a library copy of Alexandre Dumas’ The Count of Monte Cristo from the dorm room of a freshman and destroyed it. Dumas’ 1844 novel was one of several thousand works then on the Index Librorum Prohibitorum, a Vatican-issued list of books deemed morally offensive. Reading Index books without the express permission of a specially designated priest constituted a mortal sin.

Hoping to “protect the faith and morals [of] our students” while preventing the further destruction of University property, Foik proposed a solution that would govern access to Notre Dame library books for most of the next half century: Copies of prohibited works were locked in a metal cage in the basement of the Lemmonier Library, known today as Bond Hall. Its 1,500 volumes, among them foundational texts of Western philosophy and science, were accessible only by permission of an appointed priest.

At a school whose administration saw moral development as equal to, if not more important than, academic research, that cage full of books represents a rarely discussed relic in a decades-long story of a community’s self-censorship and a larger debate in Rome over how Catholicism should reckon with ideas that cut against its teachings. It came to be known as The Grill.

The Index included such authors as Descartes, Voltaire, Rousseau, Hugo, Milton, Hume, Kant, Locke, Defoe, Diderot and Sartre. By general decree and under penalty of excommunication, Catholics were further banned from reading all books deemed heretical, anti-religious, immoral, blasphemous, lewd, obscene, suicidal, Masonic, Socialist or sympathetic to divorce or dueling. This broad ban stretched to any book dealing with religion that hadn’t secured the prior approval of a bishop — the official imprimatur.

Notre Dame was not the only Catholic university in the country that caged its Index literature. Boston College, Stonehill and others did as well. Though established primarily to protect undergraduates, even graduate students and professors had to obtain permission to read books on the Index. At the time of Foik’s letter, six campus priests could dispense such permission, although the University president later became the sole person authorized to do so.

No priest more zealously monitored the literary choices of the Notre Dame Man than O’Hara. He possessed a nearly single-minded devotion to the campus’ spiritual well-being and an unrivaled rapport with the students. “The kids called him The Pope,” says Father Tom Blantz, CSC, ’57, former vice president of Student Affairs and a professor emeritus of history at Notre Dame.

O’Hara, who Blantz says spent hours each day hearing confessions in the Prefect’s Office in Dillon Hall, wanted Notre Dame to be cloistered from worldly temptation and vice. To him, censorship was both a logical and necessary part of religious living, and literature a front in the fight for students’ Catholic character. There, the Religious Bulletin became his most effective mouthpiece. Founded in October 1921 with O’Hara as its editor, the one-page newsletter was slipped under the door of each student’s dorm room daily. It listed statistics on Mass attendance and Communion distributions, answers to student-submitted questions, prayer intentions from the Notre Dame community and general spiritual advice.

The Religious Bulletin also allowed O’Hara to snipe at sinful literature and to warn students of the ultimate consequence of forbidden reading: “If you must read books on the Index, please go somewhere else to do it and don’t be taking up good room that should go to an honest-to-goodness Catholic boy who wants to save his soul. Go to hell from Harvard, if you like, but not from Notre Dame.”

On Ash Wednesday, 1924, O’Hara announced a three-week series called “A Critical History of the Development of Nasty Literature.” Adapted from 1906 lectures by Catholic author John Talbot Smith, the series held tight to the thesis that no one could read a book without internalizing some of the author’s personal philosophy and named authors to avoid. George Bernard Shaw’s fame was a passing “fad,” Ralph Waldo Emerson’s works were “a single pebble on the literary beach of America” and Walt Whitman “had absolutely no sense of verse.” O’Hara reiterated this position some years later, asking, “But why flirt with Indexed books at all? When you have the truth, why investigate every passing error?”

On occasion a student would write to ask if a specific work was “on the Index.” In its replies the Bulletin would not even deign to print the title of the book in question. “As a matter of policy the Religious Bulletin refrains from advertising by name the lower class of ex professo enemies of God,” O’Hara wrote in 1931. This policy was rarely broken, once to denounce Nobel Prize winner Sinclair Lewis as a part of students’ baptismal promise to renounce Satan.

O’Hara’s campaign against “best smellers” and “dry rot” did not stop at panning Index works in the Bulletin. In the hour after lunch he would often walk through the library scanning the shelves for books that didn’t belong. He’d then tear out the title page and hand it to the librarian so the title could be stricken from the library catalog. Citing lascivious photographs, he saw to it that Life magazine was removed from all campus magazine stands. When the editors of Life approached the Board of Lay Trustees about doing a piece on the University in 1938, he quietly shut down the story. “Confidentially,” he wrote the board’s president, “I don’t like to see the Blessed Virgin’s school appearing in a magazine that specializes in nudity.”

O’Hara’s colorfully caustic remarks sound dated, if not anti-intellectual, to the Notre Dame student today. But in his years as prefect, O’Hara spoke to a receptive audience. According to his annual Religious Surveys, an outgrowth of the Bulletin, 96 percent of students read the newsletter daily. And when asked in 1933, “Do you ever feel that you have lost intellectually because you cannot read books on the Index?” more than 80 percent of students said “no.”

Prior to his departure from Notre Dame in 1945 to become the bishop of Buffalo, New York, O’Hara appeared to have subdued students’ interest in prohibited books. Many did not know of The Grill’s existence. But certainly by the time O’Hara was appointed archbishop of Philadelphia in 1952, as the student body swelled with veterans from World War II and benefited from the presidency of Father John J. Cavanaugh, CSC, The Grill had become common knowledge among underclassmen and was more of an advertisement for prohibited works than a deterrent.

A certain mischievousness peppers recollections of The Grill. Judge Michael Brown ’55, for instance, compares the unintended effect of placing books in The Grill to the National Legion of Decency’s list of prohibited films: “They were ‘must see’ movies, and I believe the books were similarly held in great esteem.”

Father Theodore Hesburgh, CSC, who became president in 1952, upheld the permissions system required to obtain access to books held in The Grill but differed from past presidents by greenlighting every request brought to him. He did not discipline professors who began to assign prohibited texts on their syllabi, and he allowed the sale of prohibited books at the campus bookstore, only a couple quads away from the library’s copies, which remained locked in The Grill.

Hesburgh spoke out on academic freedom often in his 35 years as president and in his first year in office even risked his position over it. In 1952 he was ordered by the Vatican to cease selling the book adapted from a speech delivered on campus by John Courtney Murray, a controversial Jesuit theologian. Hesburgh refused to comply, citing academic freedom, threatened to resign his presidency and awarded Murray an honorary doctorate at that year’s commencement — and the Vatican eventually recanted its demand.

In his autobiography, Hesburgh explained his position on censorship and the role of a Catholic university. “Freedom will always be a problem for everyone, especially so in the university world. Whenever we get troublesome, which is almost always when we are doing our critical best, someone gets the bright idea of imposing controls.” He reflected on an early trip to Chile, soon after the military government that deposed President Allende had installed admirals at the head of every university. “When I met the one who was trying to run the Catholic University in Santiago, I asked him, ‘Since you would be upset if I tried to tell you how to run the navy, what makes you think you know anything about running a university?’”

The admiral responded, “It was out of control. I am just purifying it.”

In June 1966 the Vatican ceased threatening penalties for reading books on the Index, and Notre Dame’s tradition of caging prohibited books went with it. Years later, Hesburgh spoke of The Grill. “I thought the sooner we got rid of it the better. Thank God we got rid of it sooner.”

These days there is little information about and no known photograph of the cage that sat in the basement of Bond Hall for decades. But nothing can better illustrate the evolution of intellectual freedom at Notre Dame than looking back to a time when padlocking books felt normal and when The Grill existed largely unchallenged.

Today, even though certain books can occasionally be found defaced and damaged on the library shelves, most recognize the intrinsic worth of reading even controversial literature. As the head librarian stated in his letter of protest to O’Hara in 1922, “You must remember that in a university collection there is much that cannot bear scrutiny for orthodoxy or morality. For instance, it may be necessary to study the literature of Karl Marx in order to refute his doctrine.”

Pursuing academic freedom means first agreeing to have the courage of conviction, a sense of curiosity and a willingness to accommodate and adapt to new intellectual developments. Notre Dame is an experiment in whether a wholly Catholic worldview can meet this test. It seeks to be a place where religious devotion does not breed insularity and where unrestricted, fearless inquiry leads its students to God. Past efforts have been at different times backwards or brave, restrictive or uplifting. But we do well to not give up the experiment.

Alex Caton is a James H. Dunn Fellow in the Office of the Governor of Illinois. Grace Watkins is a junior philosophy major at Notre Dame.